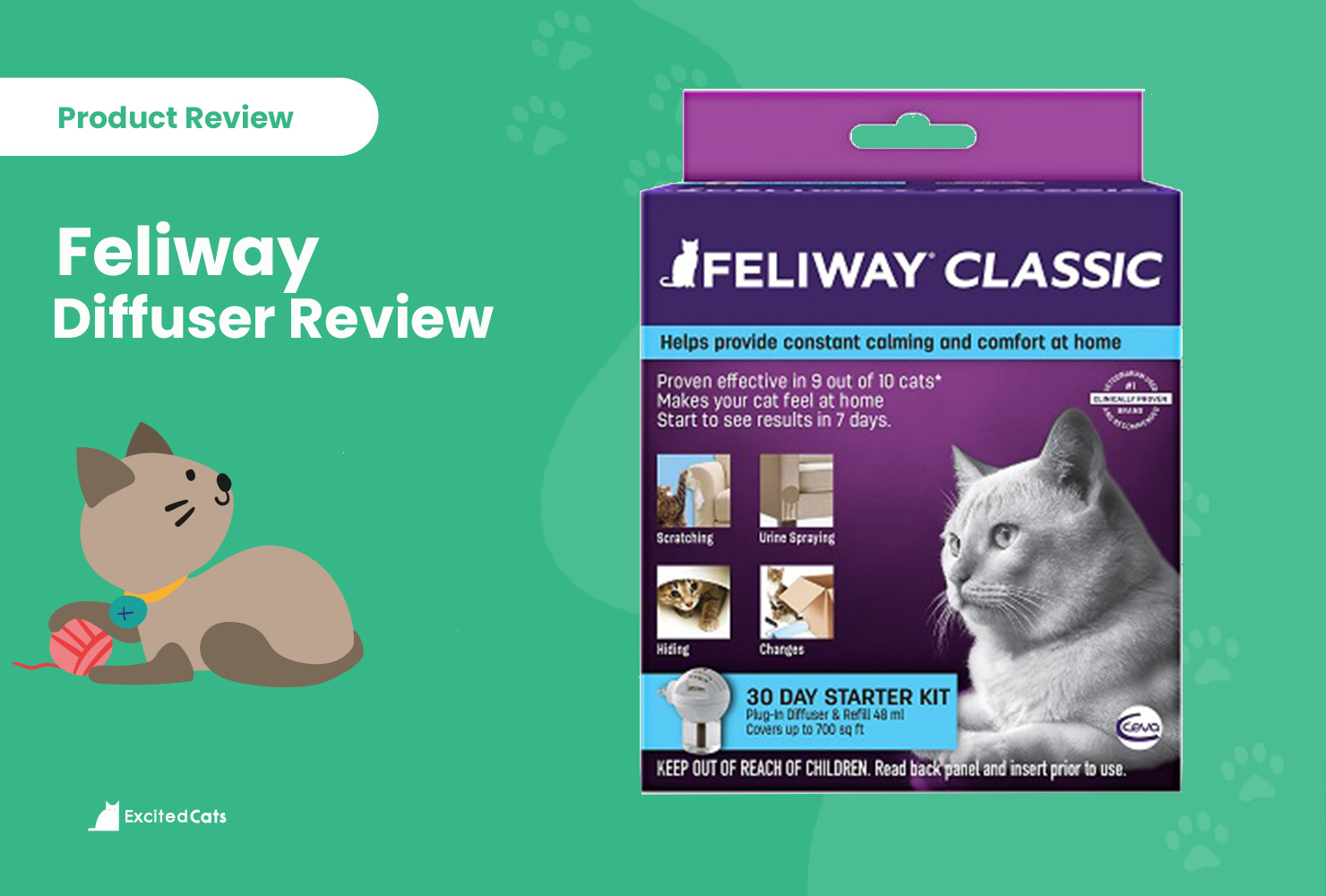 We give Feliway Classic Diffuser a rating of 4.5 out of 5 stars.

Ease of Use:
Effectiveness:
Longevity:
Price:

It can be upsetting for us humans to see our cats distressed or unhappy. Cats are sensitive creatures, so if you’ve recently moved or made a large life change, you may have noticed this having a negative effect on your cat’s wellbeing.

If your cat has started fighting, hiding, scratching, or spraying urine when they used to be calm and relaxed, then there may be an environmental change that’s causing this change in their behavior.

The Feliway Diffuser has been specifically created to help reduce or eliminate these problem behaviors. The Feliway Diffuser is made by Ceva Animal Health, well known for its use of pheromone technology to help improve the lives of domestic kitties.

Feliway Diffusers are incredibly easy to use and can be lifesavers for cat owners who are trying to find ways to help their cat feel more comfortable.

Feliway is the number-one veterinarian-used and -recommended product when it comes to decreasing unwanted feline behaviors. These include urinating outside the litter box, scratching, aggression, and more. 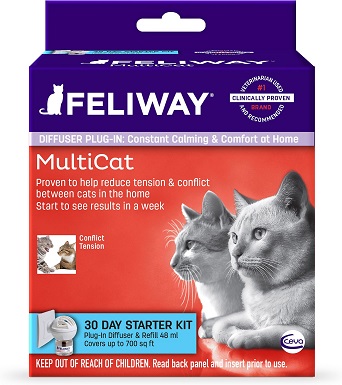 Each Refill Lasts for up to 4 Weeks

Once you’ve plugged your diffuser in, you should leave it on continuously and replace the refill after 4 weeks. Feliway suggests that for maximum effectiveness, you should always follow this cycle of replacement, even if there seems to be a little bit of product still left in the bottle. We assume that this is because the pheromones may have all been diffused and only solvent is left in the bottle.

Suitable for a Range of Plug Socket Designs

The diffuser bottle should always be kept upright, but the prongs on the plug-in diffuser can be rotated, meaning it’s possible to plug this into either vertical or horizontal outlets while keeping the unit upright so it doesn’t leak.

You’ll Need More Than One Diffuser for a Large Home

Each Feliway diffuser can cover an area of up to 700 square feet. With the average family house size in the U.S.A. being around 2,300 square feet, you’ll need to use more than one diffuser if you want to cover a larger area.

Feliway suggests placing the diffuser in the area that your cat uses most, but if your cat is scratching in one area and urinating outside their box in another, then you might find that it is more effective to use different diffusers placed around your house. That, of course, means more expense!

What behaviors can the Feliway Diffuser help with?

Results will vary depending on each individual cat, but Feliway Diffusers can help with a range of behaviors and issues, including:

How does the Feliway diffuser work?

Feliway diffusers release a synthetic, or man-made, version of the facial pheromone, F3, which cats use as a scent marker. When cats rub their faces on surfaces in their surroundings, they leave this pheromone on those surfaces. Having these in your cat’s environment makes them feel safe and secure.

Feliway calls these pheromones “happy messages” and suggests that if these calming pheromones are regularly in your cat’s environment, they will feel less stressed.

By diffusing a synthetic version of this facial pheromone, the Feliway Diffuser is designed to decrease your cat’s anxiety and stress levels. This in turn, leads to a reduction in behaviors like scratching and urinating outside the litter box, which can be a sign of anxiety.

Does it work for every cat?

No. Feliway suggests that their diffuser is effective for nine out of 10 cats but from the extensive reviews that we’ve read, it may not be as high as that. Feliway has been the subject of clinical trials that have proven its effectiveness, but there are other trials out there that suggest pheromone diffusers don’t work at all.

Anecdotal evidence from thousands of cat owners suggests that Feliway definitely does help decrease stress in many cats. The only real way to find out is to try it with your own cat! If it seems to be working and is helping reduce your cat’s stress, then keep using it. If not, you may want to explore other options instead.

Does the Feliway Classic Diffuser work for aggression in multi-cat households?

If you’re dealing with issues of multiple cats being aggressive toward each other, then the Feliway MultiCat Diffuser is a better option. Instead of the facial pheromone used in the classic diffuser, the MultiCat Diffuser releases a synthetic version of the cat appeasing pheromone, which helps cats accept each other more readily.

Remember that a diffuser alone may not be enough; you need to make sure each cat has their own food and litter tray, plus one spare. That way, there won’t be any conflicts for resources and your cats are more likely to get along.

What the Users Say

We’ve taken the time to find out exactly what different users are saying about the Feliway Diffuser, so you can get a good sense of whether this is something that is going to work for your cat.

The first thing we should mention is that the reviews for the Feliway Diffuser are good overall. Living with a stressed cat can make us owners stressed too, so many users are incredibly relieved to find out that this product really did seem to help their cat seem more relaxed and content.

Some owners of anxious cats have seen an improvement in their cat’s behavior. While they used to run out of the room in fear, their cats became calm and affectionate within a short space of time.

Feliway can also help aggressive cats. Users who had to employ a feline behaviorist to try to stop their cat from attacking people during play sessions found that after using Feliway, their cat was much calmer and less aggressive.

Some users have seen an improvement in their cat’s behavior in as little as two hours. Others say that it took over a week for any signs of improvement to become apparent. For best results, Feliway suggests that the diffuser should be plugged in and left on continuously for at least 4 weeks before you should expect to see any results. After 4 weeks, the refill should be replaced.

Certain cats even seem to seek this diffuser out, and if it’s been moved around the house, they will find where it is and make that their new favorite corner!

Some cat owners saw no improvement in their cat’s behavior, and indeed, synthetic pheromones don’t seem to work for all cats across the board. The good news is that we haven’t found any suggestion that a cat’s behavior could get worse while one of these diffusers is in use.

One thing that does worry some cat owners who use this product is that the diffuser needs to be left plugged in continuously for maximum effect, and this can lead to concerns about the diffuser getting too hot.

Feliway recommends only ever plugging in the diffuser into a grounded outlet, never an extension. Make sure the diffuser is plugged in upright and is never placed behind furniture or covered up by drapes or anything else. They also recommend replacing the diffuser itself every 6 months. Following these instructions should ensure that the diffuser works effectively and safely and will not overheat.

We like the fact that this diffuser is so easy to use. Simply plug it in and leave it to work its magic. Replace the refill once every 4 weeks, and that’s it. Most cats seem to gain a real benefit from these diffusers, so they’re certainly worth trying.

If you have a large home, you may need more than one diffuser to effectively cover the space, as each diffuser is effective for 700 square feet but not more than that. Pheromone diffusers don’t seem to work for all cats, so yours may not be positively affected.

Still, they can be a cost-effective and overall effective option for keeping your cat comfortable and happy.

There is nothing more harrowing for a cat than a trip in the car. Whether you are taking them to…
The category

Review Summary Introduction The pet food industry is big business in the United States, with an estimated $30 million worth…
The category

Naming your new feline is an exciting part of bringing them home. Whether they are brand new kittens, or a…