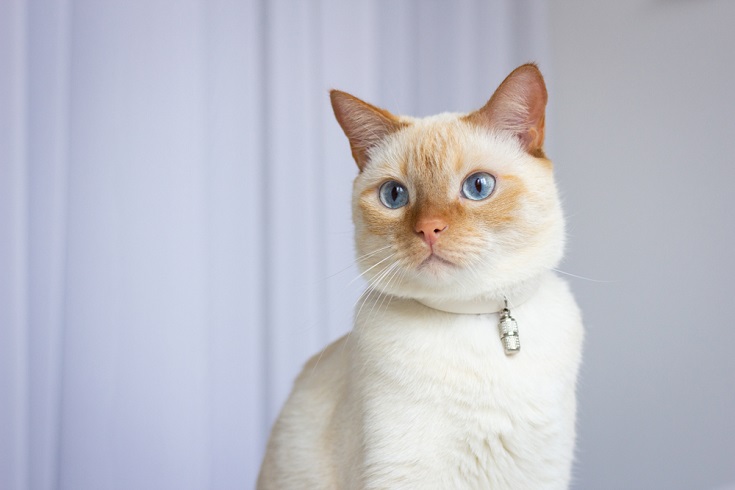 The Flame Point Siamese Cat (also known as Red Point Siamese) is a rare type of Siamese cat bred to exhibit a red colorpoint pattern. It’s called many different names worldwide, and some cat registries don’t register it at all, choosing instead to label it a red colorpoint shorthair. These cats love attention and will reciprocate that attention by climbing and sitting on you constantly.

The Flame Point Siamese – Before You Buy…

Red Point Siamese cats can vary quite dramatically in price. We often find them between $400 and $1000, but they can go up to $2000 depending on where you live and other factors. If the parents are show quality cats, it will increase the cost significantly. A more reputable breeder will charge more than a less known one, and it may be difficult to create these extremely rare cats, requiring more than one try. Because they are so rare, it’s not very likely to find one up for adoption, but that shouldn’t discourage you from checking. If successful, you can purchase one at a significant discount.

1. These Cats are the Rarest of the Siamese Breed

It’s incredibly difficult to achieve the red flame color and even more difficult to breed out the face’s tabby lines.

In the 1930s, several breeders worked for several years to perfect the breed, and it took several attempts.

3. 75% of all Flame Point Siamese Cats are Male

It’s unsure why, but it’s interesting to point out that most Flame Point Siamese cats are male.

The Red Point Siamese cat is known for being a little more friendly than most cat breeds and is often considered doglike because of how they tend to follow you around the house. It likes to be with people and can suffer from separation anxiety if you go away for too long. It’s also very active and fast. One of the most interesting things about it is that it is a very vocal cat that regularly carries on entire conversations with itself.

The Flame Point Siamese is also very intelligent and can sense your mood and alter its behavior accordingly. It can follow simple commands and will often try to exert control over any other animals you have in the house, including dogs, and will often be successful.

The Flame Point Siamese is the perfect family pet. With its constant vocalizations and intense desire for company and pets, it will be favored by many. It’s well suited to children and the elderly and is self-sufficient as long as there is a family member nearby.

Yes, the Red Point Siamese cat is one of the friendliest cat breeds, especially when it comes to other cats.   It usually adapts really well to other cats, even later in life, when many other breeds are to set in their ways to allow a new family member.

Things to Know When Owning a Flame Point Siamese:

In this section, we’ll list a few things you should consider before purchasing a Flame Point Cat Breed.

Cats are carnivores, so they require a diet high in protein. We recommend a brand that contains at least 25% protein and has at least one whole meat like chicken, beef, turkey, or tuna listed in the ingredients, preferably as the first ingredient.

Soft cat food can add moisture to the diet and can help if your cat suffers from constipation or dandruff. Dry cat food can help scrub away the plaque and tartar from your pet’s teeth, reducing the risk of dental disease. Dry food is also the way to go if you notice your cat has loose stools or diarrhea after eating the wet food.

The Flame Point Siamese Is an active cat breed that loves to explore. Larger homes are better, but you can supply plenty of places to investigate by placing boxes, shelves, and other objects in various places around your home. Several commercial cat condos you can choose from to give your cat more places to explore.

The best way to encourage your cat to get the activity it needs is to take a few minutes and play a game with them. The laser penlight is a fantastic way to get your cat running through the house for some much-needed cardio.

Cats are notoriously difficult to train, but the Flame Point Siamese is known for following simple commands quite well. You can try training your cat the same way you would train your dog, with plenty of positive reinforcement and plenty of treats. With patience, your Flame Point Siamese can learn several commands like sit, here, rollover, and many more.

Grooming your Flame Point Siamese is extremely easy. It will only require you to occasionally comb the hair to keep the shedding and hairballs down and some occasional nail trimming if your cat ruins your furniture and curtains.

Let’s look at some of the most common ailments that a Flame Point Siamese may face.

The female Flame Point Siamese cat tends to be more temperamental and spends more time prowling her territory, while the male is more laid back and prefers lounging in a ray of sunlight. The males also tend to be a little larger in height and weight than the females and can often weigh up to five pounds more.

We hope you have enjoyed reading about this extremely rare breed of cat and we had helped answer any questions you might have had when you began reading. If you have found some interesting facts, please share this guide to the Flame Point (red) Siamese cat on Facebook and Twitter.

One of the hardest things about having a feline is maintaining their litter box. For many pet-parents, it comes to…
The category

Throughout history, people have lavished all kinds of luxuries on their pets, from treats to clothing and food fit for…
The category

A Cat’s Tail Can Tell You a Lot: Here Are 6 Positions & their Meanings

Our cats usually act in any way they see fit. They have no trouble using body language as a means…