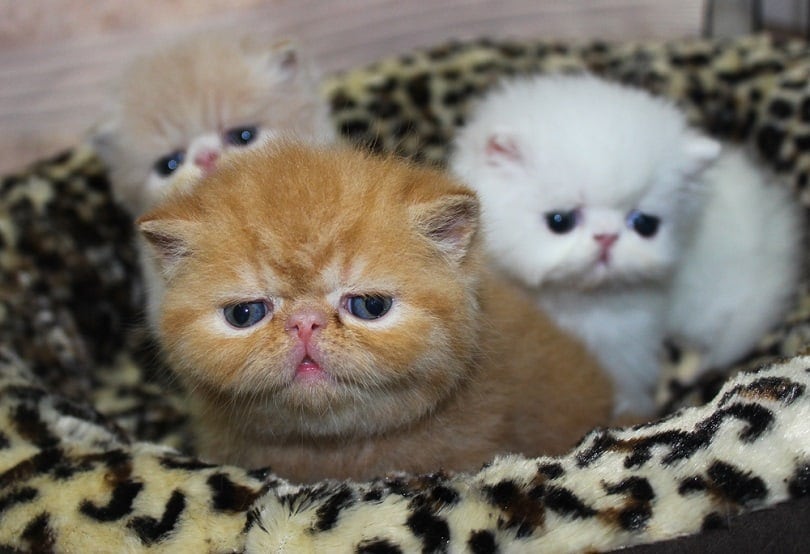 There seems to be a general love/hate relationship with flat-faced felines: Either they’re beautiful or odd, depending on who you ask. Despite this divided opinion, flat-faced cat breeds, or brachycephalic breeds, are truly unique.

Cat breeds with flat faces and short snouts are called brachycephalic, the same designation as Bulldog and Pug dog breeds. Unfortunately, this adorable trait comes with a unique set of health issues that results in the most extreme version of these breeds not being able to breathe correctly. With careful management, though, they can live happy and healthy lives.

Have a look at these 11 adorable flat-faced breeds!

Bred to resemble a Black Panther, the Bombay was developed in the 1950s by crossing a sable Burmese with a black American Shorthair. Indeed, the Bombay closely resembles a Burmese, but with a longer and larger body and longer legs. They have short, jet black coats with copper or green eyes and a medium-sized, muscular build. They are highly social cats that tend to attach strongly to their owners and make great family pets. Overall, they are playful, intelligent, and friendly felines.

The British Shorthair is a stocky, muscular, pedigreed version of a traditional British domestic cat with a distinctively dense and thick “wooly” coat. They have a naturally friendly and good-natured appearance and calm temperament, making them one of the most popular breeds in their home country. They are an easy-going and fairly docile breed that is great with children and other pets, making them a family favorite. These cats are also easy to groom and adaptable to apartment and indoor living, so long as they are close to their human family.

Originating in Burma but developed in the United States and Britain, the Burmese is a compact yet stocky and muscular cat with a distinctively short and glossy coat. These cats are known for their playfulness and sociability, often maintaining their kitten-like temperament and character well into adulthood. They have a “dog-like” attachment to their owners and can easily be taught to fetch and obey simple commands.

Originating in the U.K. in the early 1990s, the Burmilla gets their name from their Chinchilla Persian and Burmese origins, as they were first developed from these breeds. They are medium-sized cats with slender, elegant, yet muscular bodies and are most recognizable by their silver coat and the appearance of “make-up” lining their facial features. They are fairly independent cats, although they retain a kitten-like character well into adulthood and attach strongly to their owners. Overall, they are intelligent, sociable, and playful cats that do well with kids and make great family pets.

Developed as a short-haired version of the Fluffy Persian, the Exotic Shorthair is similar in almost every other way, including temperament, coloring, and the characteristically flat face. They have shorter, denser coats and are generally livelier and more playful than their Persian cousins. They are total lap cats that adore cuddling with their owners and are indeed one of the most affectionate breeds out there. Their calm, gentle, and loving nature make them an ideal choice of family pet.

Created from crossing a Persian and Siamese, the Himalayan resembles a Persian in many ways but with a slender, athletic Siamese-type body hiding underneath their thick fur. They commonly have the striking blue eyes of a Siamese too, with a patient, easy-going, and calm temperament. These cats are devoted to their families and crave attention and affection. They are social animals that are generally fine with other pets but are known to be moody at times.

Also known as a “Sausage cat,” the Munchkin is a fairly new breed characterized by its very short legs caused by a genetic mutation. Some breeders are concerned by the potential lack of mobility caused by the breed’s short legs, while others state that their short legs do not interfere with their normal running and jumping abilities. They are outgoing and affectionate cats that don’t mind being handled and typically weigh up to 9 pounds.

The Persian is the breed that mostly comes to mind when one thinks of flat-faced cat breeds, and for good reason: They are one of the most popular domestic cat breeds in the U.S. These cats are the quintessential lap cat, with tons of affection to give and an easy-going, docile nature. They are quiet cats that are highly adaptable to indoor life and are regarded for their placid and calm temperament. While they are generally easy to care for, their thick coats will require daily brushing to keep them from matting.

Most recognizable by their folded forward ears that are caused by a genetic mutation, the Scottish Fold is a medium-sized breed that can come in almost any coat color or combination. They are typically good-natured cats that get on well with other cats, pets, and children, making them an ideal family feline. While they are highly adaptable and do well in apartments, they are also playful cats that enjoy roaming outdoors. They can be stubborn at times but attach strongly to their owners and will become depressed if left alone for long periods.

Mostly recognizable by their highly curled coats, the Selkirk Rex is a solid and stocky breed that can come in a variety of colorations and coat lengths. Along with their curly coat, these cats also have distinctively curly whiskers, a rare trait among cat breeds. They are affectionate cats that are known to follow their owners around the home and don’t enjoy being left alone for long periods. They are generally docile felines that prefer to laze on their owner’s laps, but they enjoy regular play too.

Also commonly known as the Chinchilla Persian, Silver Persians are often referred to as the “Rolls Royce” of the cat world. All Silver Persians have green or blue-green eyes, with outlined facial features that make them appear strikingly “doll-like.” They are most revered for their sparkling silver, blue, or gold coats that are characteristically tipped with either black or blue. They are still recognized as part of the Persian breed by the CFA, but many breeders and enthusiasts believe that they should be designated as a separate breed.

How to Get Your Kitten to Stop Biting – 7 Useful Tips

There’s no denying that kittens are adorably cute and fluffy — and playful! Sometimes, however, that playful streak can cross…
The category

Can Cats Eat Raw Chicken? Everything You Need to Know!

There is quite a bit of controversy today concerning whether or not cats should eat raw meat. In the wild,…
The category

Cat exercise wheels are somewhat of a new concept for owners, but they are really starting to catch on. It…