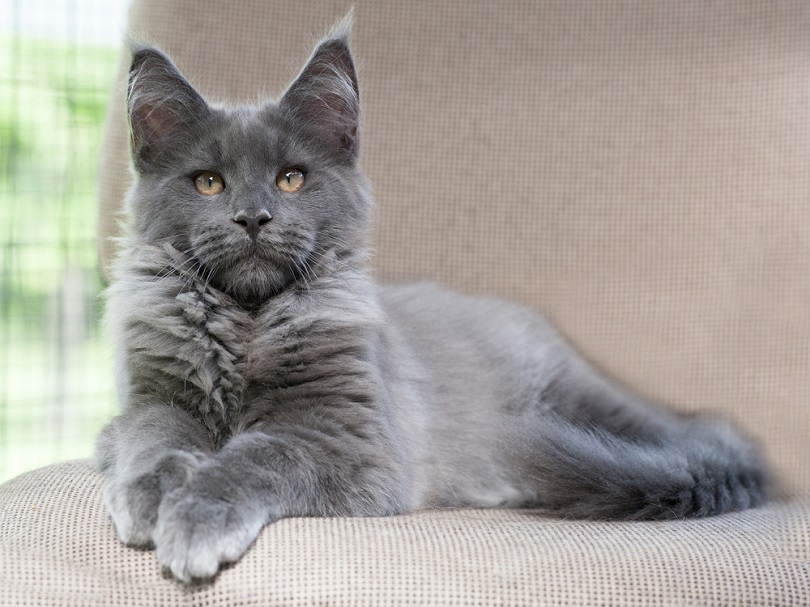 Maine coons are among the world’s largest cat breeds with the current record holder—a Maine Coon named Ludo—measuring 45.6 inches long from tip to tail. And these gentle giants come in all different shades and pattern ways.

But what about grey? Do grey Maine Coons even exist?

To the average Joe, there are plenty of Grey Maine Coon cats in the world. Some are grey with hints of silver or smoke. Or even grey with streaks of white fur. And some are just a solid grey color all over.

But…they’re not grey. Well, not at least to the Cat Fanciers Association and other cat clubs. Instead, they’re referred to as “blue”.

There Are Blue Maine Coons?

When referring to cat colors, grey or silver cats are called blue due to the bluish tint that their coats will have. The blue is a subtle hue similar to that which military cadets wear. Cats with grey colored coats effectively have a diluted black coat—genetically speaking.

But what’s wrong with the term grey? Nobody knows. The running theory is that it just sounds fancier by judges at cat shows.

There is an actual gene known as the dilute gene (or melanophilin) that can be present within the genetic sequences of some cats. Not all cats have the gene, and even those who do are not guaranteed to have a diluted coat.

The dilute phenotype—or diluted color coat—only makes an appearance when the cat carries two copies of the dilute gene. This is only possible through the inheritance of the gene from both parents, making the effect autosomal recessive—and rare.

The effect is produced because the melanophilin alters the distribution of melanin granules (pigment) throughout the cat’s fur. Cats without the dilute gene have normal pigmentation uniformly through the fur. However, cats with two copies of the gene don’t have uniform pigmentation. Instead, they experience pigment clumping that causes many areas in their hair to have no pigmentation at all.

But if that’s the case, why are the colors simply diluted and not absent?

That’s because these areas of clustering (both with pigment and without) are on a microscopic level. So, when you see them from your eye, the colors appear blended and diluted because we don’t have microscopic vision.

That means when you see a blue Maine Coon, you’re actually looking at a black cat with two recessive gene copies of melanophilin.

How Can You Tell What Color a Maine Coon Kitten Will Be?

Determining a kitten’s color is pretty easy when it comes to Maine Coons. And that’s because of a very interesting set of genetic rules they follow.

Female kittens, on the other hand, receive one color gene from each parent. This makes them more likely to have mixed colors or more unique combinations.

What about Grey vs Silver Tabbies?

A tabby cat is any domestic cat that has a pronounced “M” shaped marking on their forehead accompanied with any combination of striping, dotting, or other marking along their body. And there are tons of different Maine Coon tabby cats.

The five main categories of tabbies are:

However, you’ll probably hear blue Maine Coons tabbies get separated into silver and gray categories. But what’s the difference? Why is one silver and the other grey?

That has to do with the base color of their agouti hairs. These are the undercoat and ground color hairs of your cat. If a tabby has grey/black stripes on top of a grey agouti coat, they will be referred to as grey tabbies.

But if the cat has black or grey stripes/coloring on top of a light/white agouti coat, they’ll be referred to as silver tabbies.

How Rare are Blue Maine Coons?

When it comes to Maine Coon colors, blue is far from the most common. Typical colors for the breed are black, cream, and white. However, solid blue Maine Coons aren’t unheard of. And it’s not really all that rare either. It’s just that it’s not a popular choice.

Maine Coon cats are known to come in at over 85 different color combinations. With so many different choices, it’s tough to settle on rarity.

So, while the grey Maine Coon physically exists, they are not formally referred to in that way. They’re called “blue” by the professional cat clubs, and we’re just going to have to go with them.

These Maine Coons don’t possess a dominant gene colorway. They’re completely recessive, but that doesn’t make them any less lovable.

If you’ve ever met a Norwegian Forest Cat, then you’ll already know that these magnificent cats are large, powerful, and…
The category

According to Buddhist stories, the Birman cat was created by a Burmese goddess. The tale tells of a litter of…