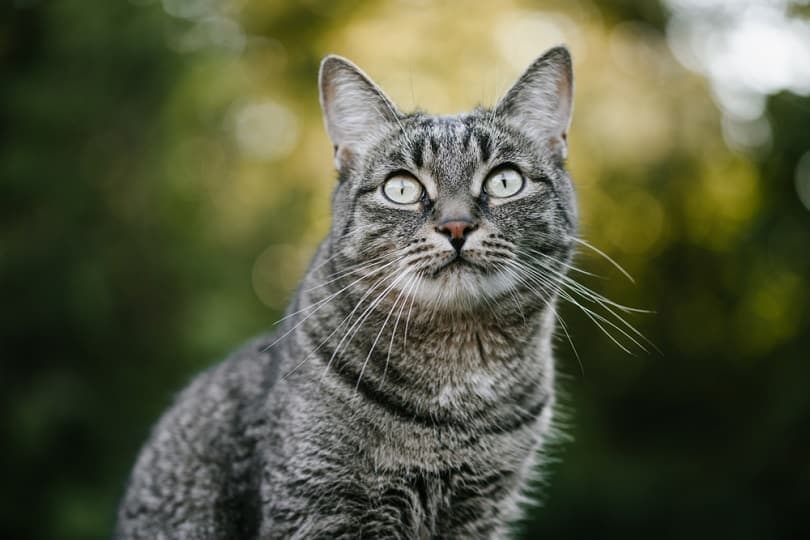 If you love your Grey Tabby cat or are looking at adding a cute Grey Tabby cat kitten to your family, then you’ll enjoy finding out more about these gorgeous cats! We’ve collected 11 facts about Grey Tabby cats, from legends about how they got those sweet M markings on their foreheads to how a Grey Tabby cat was the inspiration behind one of the very first cuddly toys.

So, snuggle down with a hot drink and your Grey Tabby cat if you’ve got one, and get ready to learn more about these striking cats.

1. Grey Tabby cats can come in many different breeds

Grey Tabby cats aren’t a breed, but a coat color! Tabby cats can come in all sorts of colors, including red, brown, silver, caramel, and of course, our favorite, grey! There are a huge number of different cat breeds that can be found with the Grey Tabby coloration, including the American Shorthair, Scottish Fold, Norwegian Forest Cat, and many others!

2. All Grey Tabby cats have an “M” on their foreheads

Look closely at the forehead of any Grey Tabby, and you’ll see a cute “M” mark on their foreheads in a darker fur color. There are three different legends about how this marking came to be, so choose the one you like the best! The first says that the M was created when the prophet Muhammad laid his hand on the head of his favorite cat. The second says that the Virgin Mary marked the cat’s face in gratitude for them purring when baby Jesus wouldn’t stop crying. The third, non-religious version suggests that the M is a frown caused by a Tabby cat concentrating at a mouse hole!

As well as being many different Tabby coat colors, all Tabby cats, including grey ones, can have five different coat patterns. Classic Grey Tabby cats have swirled, circular patterns along their sides. Mackerel Grey Tabby cats have narrow stripes down their bodies, like a tiger! They also have a dark stripe along their spine. Spotted Grey Tabby cats are covered in spots, which can be oval or striped, as well as being bisected by tiger stripes. A ticked Grey Tabby is more unusual in that they don’t have classic Tabby stripes. They do have Tabby markings on their faces and shaded hairs over their bodies. They also possess the agouti gene that’s responsible for Tabby markings. Patched Tabbies can have any of the above markings, with areas of different colors.

4. Grey Tabbies can have a range of different eye colors

Depending on the breed of your Tabby cat, they can have different eye colors, including yellow, green, copper, hazel, and blue. The specific eye colors of different Grey Tabby cats will depend on their breed, so if you want a Grey Tabby cat with a certain eye color, then it’s best to check their breed standard to see if that’s a possibility.

5. The Grey Tabby pattern is thought to come from wild cats

It’s thought that the beautiful swirling patterns on domestic Grey Tabby cats are from genes from wild cats. This is a naturally occurring pattern and can be seen in the European Wildcat, African Wildcat, and Asiatic Wildcat, which all have similar coats in terms of patterns and colors.

6. All Grey Tabby cats have the agouti gene

The gene that’s responsible for grey Tabbies, as well as every other Tabby shade, is the agouti gene. This is a dominant gene, so if a cat has this gene, they will be Tabby colored! That’s one of the reasons that you find Tabby cats in a huge range of different cat breeds. The agouti gene creates striped bands of light and dark across individual hairs.

Your Grey Tabby cat’s temperament will depend more on which breed they are than the color of their fur. A Scottish Fold Grey Tabby will have a different temperament and personality than a Grey Tabby Norwegian Forest Cat. So, if you’d love a Grey Tabby cat, pick a breed that this color is common in but whose temperament also suits what you and your family are looking for in a cat.

8. The name Tabby comes from a silk-producing region

It’s thought that the name “Tabby” comes from the French word, taffeta, a type of striped silk. This word originates from the 14th-century word, “atabis,” which can be traced even further back to the Arabic term, “attabiyah,” which refers to a district of Baghdad famed for its striped silk. The first reference to a Tabby cat was made in the 1960s, and the term soon became shortened to simply Tabby in the 1970s.

9. A Grey Tabby inspired one of the first cuddly toys

Celebrate your wonderful Tabby cat on April 30, which is National Tabby Day! It’s the perfect time to treat your beautiful Grey Tabby cat to tasty new treats, a catnip toy, or just extra special cuddles to let them know how much you love them! Check out the #NationalTabbyDay hashtag on Instagram to see gorgeous Grey Tabby cats!

11. Pusheen is a Grey Tabby cat

You’ve probably seen the round Grey Tabby cat Pusheen on all sorts of merchandise, from cushions to backpacks, phone covers, pencil cases, and more. Pusheen was created by Claire Belton and appeared in many online comics before going viral and taking over our lives in the best possible way!