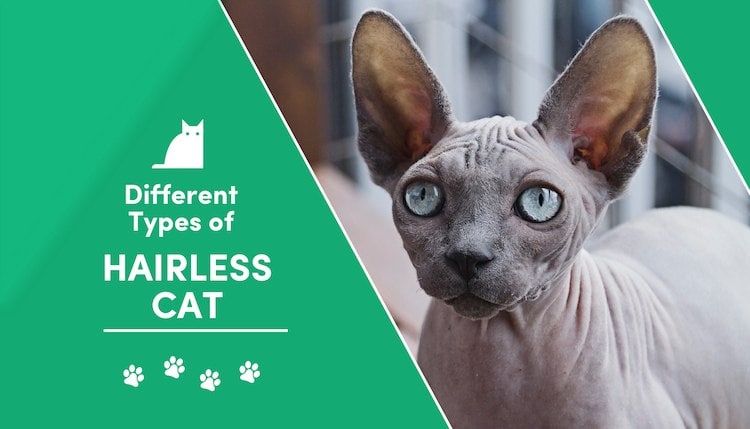 Hairless cats are unique, interesting, and fiercely lovable. Many people mistakenly think that hairless cats are a breed of their own, but there are several distinct breeds of hairless cats recognized by breed registries like the Cat Fancier’s Association and The International Cat Association. There are also quite a few designer breeds and experimental crosses that result in hairless cats.

Each breed of hairless cat has certain qualities that make them just a bit different from the rest, whether that be muscle tone, facial structure, or coat.

We’ve made a list of six of the most popular hairless cat breeds to help you tell the difference.

When most people think of hairless cats, they envision a Sphynx, and rightly so, since these are the most common of the hairless cat breeds. Their lean physique, large ears, and wrinkled faces give them a unique look, even among other hairless breeds. Rather than being entirely hairless, their coat is velvety and feels almost like peach fuzz. A Sphynx may even have tufts of fur, especially on their face, legs, or tail.

In terms of personality, Sphynx owners will tell you that their cats are not quite like other cats. They’re both vocal and social, so they tend to follow their human friends around while chattering away. Sphynxes are bright and curious.

The Elf is a relatively new breed produced by crossing an American Curl and a Sphynx, taking the most appealing features of both. Like a Sphynx, they aren’t completely hairless; their coat is downy and soft to the touch. Their American Curl lineage shows in their ears, which curl backward in an arc up to 180 degrees. Elf cats have prominent facial features with pronounced cheekbones.

This hairless hybrid can be a bit of a handful, much like a Sphynx. As kittens, they tend to be restless and frisky. As adults, an Elf may calm down and become an affectionate lap cat but will probably retain its love of climbing and perching at great heights.

Peterbalds are named after their hometown of St. Petersburg, Russia, where they were first bred in 1994. These slender cats are the product of experimental breeding between a Donskoy and an Oriental Shorthair. They stand out from other hairless cats due to their elegant posture and long legs. Wide-set ears and wedge-shaped heads harken back to their Oriental Shorthair roots.

Peterbalds are known to have sweet temperaments and acclimate well to homes with other pets or children. Their webbed feet and oval paws give them dexterity that when combined with their clever nature, can get into trouble around the house. Nosy Peterbald cats can open cabinets and grasp objects far more easily than most other cats.

The Donskoy cat is another relatively new Russian breed that’s known by a few different names. Sometimes called a Don Sphynx or Russian Hairless, the Donskoy is a bit unusual as hairless cats go. While other cats get their baldness from a recessive gene, this breed owes its coat — or lack thereof — to a dominant gene mutation.

Some Donskoys grow a patchy coat during the winter months, shedding it each year when the weather turns cold. Donskoys require a fair bit of grooming for a hairless cat. They are prone to skin issues and can smell bad if they aren’t bathed regularly.

The Lykoi — commonly called a werewolf cat — isn’t always a hairless cat, but they’re unusual enough to be worth mentioning. Some of these cats have a full coat of fur, while others are entirely hairless. Others grow a coat during some seasons and then shed it. Most Lykoi cats lack fur on their faces, legs, and feet.

Although they may look like a Sphynx, genetic testing has been done on this breed to confirm they are not descended from Sphynxes. Their werewolf-like appearance is caused by a natural mutation in shorthaired cats.

The Minskin is the result of crossing a Munchkin and a Sphynx, with other breeds like Devon Rex included. This cross results in a tiny hairless cat with very short legs and unusually large ears. These cats are much smaller than average, topping out at around 6 pounds. Minskins are not entirely hairless; their faces, ears, legs, and tail are usually covered in a fine, velvety fur.

Minskins are distinct from other hairless cats in that they are generally fairly round. With round eyes, round cheeks, and a medium-sized body, they are much less angular and bony than most other breeds descended from the Sphynx.

No matter which of these hairless cat breeds you’re considering, you’ll find an intelligent, inquisitive, playful animal. They make wonderful companion animals and want to be an important part of their households. What hairless cats lack in fluffiness, they make up for in warmth of personality.