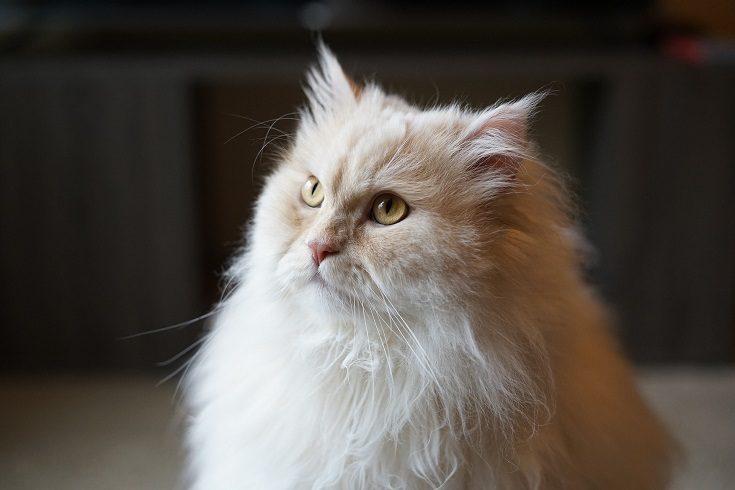 There are 20 recognized colors of the Himalayan cat, which is technically a coat variation of the Persian breed. All these wonderful variations are light, fluffy, and positively frothy confections of kitty cat!

In this article, we’re going to give you some basic information about Himalayan cats, details about each of the 20 recognized colors, as well as grooming tips to help keep your cat looking purr-fect!

There are two Himalayan coat patterns as recognized by the Cat Fanciers’ Association – the leading authority when it comes to cat shows, competitions, breeds, and colors.

The more common, and the most classic-looking Himalayan pattern is simply the point. The body is solid, even color in light shades such as ivory, fawn, and cream. The solid points create a stark contrast, and consist of a darker color on the legs, feet, tail, ears, and face or “mask.”

Lynx point refers to the patterning of the points of the Himalayan. A lynx point Himalayan has dark, clearly lined stripes of color on their extremities, as opposed to solid.

The body of this scrumptious cat is ivory with points of chocolate brown. Think warmer, milk chocolate tones! Their noses and paws are a dark or “cinnamon” pink color and their eyes are always a vivid, deep blue.

The body is a warm, pale shade from cream to fawn that shades gradually lighter toward the chest and stomach. Their points are a dark, almost wet-looking seal brown, as are paw pads and nose.

One of the rarest colors of all the Persian coats, the Lilac Point has an icy white body and points of pale but warm gray. Their eyes are intensely blue, and noses and paws a delicate lavender-pink.

These cool colored kitties are blue all over: the body is an icy, bluish-white; points are a cold, dark blue; slate blue nose and paws; sapphire blue eyes.

An overall lighter shade, the Cream Point Himalayan has a white-colored body like frothed milk and points only a touch darker in a buff or custard shade. Their eyes are a vibrant blue, and nose and paws are a shade of coral or flesh.

A body of pale fawn to creamy white, and seal brown points with patches of cream or red define the Tortie Point Himalayan. They can have either coral pink or seal brown nose and paws. Eyes are always deep blue.

A warmer tone of blue, the Blue-Cream Point Himalayan has a creamy white to bluish-white body and blue points with cream patches. Their noses and paws come in pink or slate blue, and their eyes are Prussian blue.

A post shared by Lulu the Himilayan Persian (@luluthechocolatehimi)

Another delicious confection of a feline, these cats have ivory bodies and chocolate points with unbrindled patches of cream or red. Noses and paw pads range in warm, sandy pink tones from cinnamon pink to coral.

Lilac is an exceptionally hard to come by color but striking in its beauty: glacial white body; lilac points with cream patches; cool pink or lavender-pink nose and paws; eyes like lapis lazuli.

The first of the stripped pattern Lynx Point colors, the Seal Lynx Point Himalayan’s points are a light, beige brown brindled with dark brown tabby markings. The body is a warm-toned, fawn to pale cream. These cats have either a brick red or seal brown nose and paws, and deep blue eyes.

A body of icy, bluish-white and points in silvery blue with brindled, dark blue tabby markings signifies this cool-toned cat. Their nose and paw pads can be blue or a dusky old rose, and eyes are midnight blue.

The warm sister to the cold Blue Lynx, Flame Lynx Point Himalayans have bodies of creamy white and points of deep orange flame brindled with dark red tabby markings. Their paw pads and nose are coral pink to flesh tone, and eyes are deep violet-blue.

The Cream Lynx Point Himalayan has a body creamy white that is barely, but noticeably, lighter than the pale cream points with dark cream brindling. Nose and paws are either flesh or coral pink, and eyes are deep blue.

Like your favorite glasses’ frames, these cats are a delightful patchwork of beige-brown points with dark brown brindling and red patches. Their bodies range from light cream to the white of freshly steamed milk, and their nose and paws are brick red, coral pink, or seal brown.

A cool, bluish-toned white body and blue points with dark blue tabby markings and cream-colored patches. Nose and paw pads can be pink, old rose, or blue. Eyes are a deep, Oxford blue.

These warm-toned cats have ivory bodies and milk chocolate points brindled with dark chocolate tabby markings. Their nose and paws can be coral or cinnamon pink, and eyes are a vibrant blue.

An ivory body and milk chocolate points with dark chocolate tabby markings and red patches make the Chocolate-Tortie Lynx Point Himalayan one frothy mug of kitty cat! Their eyes are a warmer, navy blue and nose and paws are coral or cinnamon pink.

Like some kind of delightful ghost cat cookie, these cats have icing white bodies and pale grey points with a tinge of pink, brindled dark lilac tabby markings, and cream patches. Their eyes are midnight blue, and nose and paws range from coral to lavender-pink.

Himalayan cats are actually a sub-breed or “colorpoint” coat variation of the Persian cat breed. The term colorpoint describes the overall coat pattern of a solid, lightly colored body with darker color pooling at the “points,” or extremities of the body.

The Persian is an ancient breed and can be found documented in hieroglyphics that date as far back as 1684 BC. They are commonly believed to have come from Persia – a long-haired cat occasionally peeking out from amongst spices exquisite rugs on a desert caravan across the Middle East – but experts are mystified to this day as to the exact origins of this magnificent cat.

These regal cats are beloved for their luxurious, silky fur and sweet faces. They have gentle personalities and a quiet voice that some describe as musical. Himalayans are companionable, talkative, expressive cats that make a charming pet for adults and children alike!

Whatever the color, the magnificent, flowing coat of the Himalayan Persian cat requires daily care. Brush them every day to prevent hairballs and tangles. Occasional baths and nail trimmings will also help keep their coat healthy and beautiful!

The wide face and large eyes of the Himalayan mean that some are prone to tearing, or watery eyes. This is rarely a health concern, being much like the “sleep sand” that accumulates in our own eyes. Teary eyes are easily remedied with gentle daily eye cleaning or face washes.

Which creamy, dreamy shade of feline is your favorite?

The sweet-faced Himalayan cat comes in all manner of delightful color combinations. From frosty whites and blues, to flaming reds and oranges, to chocolates and lilacs that recall a French pastry case.

Whichever color you choose, we hope that this collection of downright delicious Himalayan colors helps satiate your sweet tooth and brings a smile to your face.