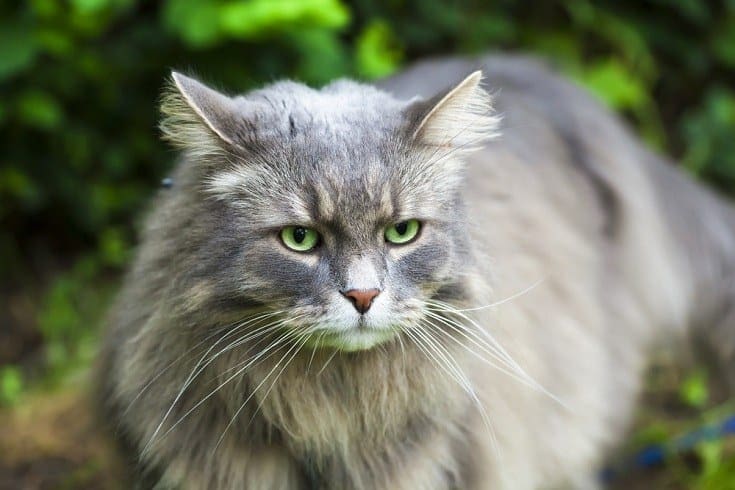 Do you love cats but have an allergic reaction to them? The good news is that there are several breeds that are considered hypoallergenic and that won’t produce as many allergy symptoms, if any at all, in sufferers. Following is a list of the 15 best hypoallergenic cat breeds for people who suffer from allergies.

Closely related to the Siamese cat, this breed has very short hair and sheds minimally. These cats look similar to the Siamese, but they come in a variety of different coat colors. They require little grooming and do a good job of keeping themselves clean as they age. These cats are highly intelligent and friendly, but they do like to maintain a sense of independence. They are also athletic and enjoy climbing trees and fences when spending time outdoors.

These animals are spotted and look like cats that can be found in the wild, but they have an affectionate domestic temperament that makes them popular among families throughout the world. The Ocicat is sociable and will greet visitors when they come to the door. They prefer lying in laps rather than alone on the couch, and they don’t hesitate to let their owners know when they aren’t getting enough attention. Their short hair and lack of shedding make them a great option for those who suffer from allergies.

This unique cat breed has only an undercoat, referred to as down. It’s super fine and soft, yet it doesn’t shed or instigate allergy symptoms. These cats are known for losing their undercoat, however, resulting in bald spots as they age, which can make them look a little funny. Still, they are loving and affectionate cats that don’t mind spending most of their time inside the house.

These talkative cats seem to read their owner’s minds and know when it is a bad day. They aren’t shy about offering up their affection to anyone who will take it. They enjoy spending their time with other cats and don’t typically mind living with well-behaved dogs. They also love to play with toys, and if none are around, they’ll make their own toys out of things like toilet paper rolls.

This hairless cat can have leathery skin that isn’t soft nor rough to the touch. With no hair to speak of, they are the perfect companion for people with allergies. They would rather spend their time inside than out, and they may require the use of blankets and sweaters when wintertime rolls around. They do like to talk, but not as much as the infamous talking Siamese.

This breed is also referred to as a sausage cat due to their short legs and stocky build. They are a loving and loyal breed, but they are susceptible to many health problems due to genetic mutations. Some Munchkins can develop leg, back, and hip problems. Their playful mentality and curious nature make these cats a fun companion for children of all ages.

Originally from Burma, this cat breed has a short and glossy coat that feels like satin to the touch. These cats never really grow up in spirit, as they tend to maintain their kitten-like attitude and playfulness as adults. They easily get attached to their owners and don’t appreciate being left at home alone for long periods of time. They’re also vocal when action is taking place, which can be problematic for busy households and families that include kids.

The Russian Blue cat has bright green eyes and low grooming needs. They have thick, furry coats, but they don’t produce as much of an allergen called glycoprotein Fel d 1 that most other cats produce, which helps make them hypoallergenic. They have a serious look but a playful attitude and a good sense of humor. They love humans no matter their age, from infants to the elderly.

This Asian cat breed has an elongated body that is strong yet elegant. They’re well-known for meowing all the time — day and night. Their short fur makes life easy on people with allergies, and their piercing blue eyes demand attention from anyone who might be spending time in the same space as them. Their social personality can get them in trouble when their human family members are trying to sleep, but they are respectful of boundaries in general.

This awesome-looking cat breed is named after the wild Bengal tiger because their markings are similar to the wild appearance of the Bengal tiger. However, potential owners can rest assured that the Bengal housecat is completely domesticated. Unlike most cats, these do like to play in water, whether it is in the form of a pond, a pool, or a faucet. They have a great deal of energy and need plenty of toys to keep them entertained while spending time indoors.

These cute cats have curly hair due to a genetic mutation, giving them a youthful, playful look, which is neat because their personality closely resembles these characteristics. The LaPerm can weigh anywhere from 5 to 10 pounds and loves heights, so they can typically be found in a tree outside or on a cat post inside. Their social personality means that they won’t run and hide whenever visitors show up at the front door.

These cats sport an athletic body and a soft coat that is a joy to snuggle with. They are playful, vocal, and friendly to other animals and humans. This impressive breed always seems to be looking for attention and won’t hesitate to use their intelligence to get their way. They aren’t as independent as many other breeds on our list, so they should live in a household where someone tends to be around all the time.

Many people compare the Javanese to the Siamese in terms of looks and attitude. These cats will follow their family members around the house and meow to communicate more often than most people would like. They’re extremely food motivated, making it easy to teach them tricks with the help of treats. But their love of food could result in obesity, so they shouldn’t be offered an unlimited food supply throughout the day.

This breed is born with many different coat colors, but their hair is fine and fragile, so it should never be brushed or combed. Even over-petting could cause hair damage! They like to clown around and will happily join in on social gatherings at home. This breed purrs anytime they get the attention that they are looking for, and they will never pass down an opportunity to sunbathe, whether outside or through a window.

As the name suggests, this cat breed hails from the frigid climate of Siberia. They yearn to spend the majority of their time outside, and their high prey drive makes them excellent ratters. These cats get along well with other animals, including cats, dogs, and even ferrets. They aren’t needy and don’t mind spending some of their time alone. Overall, the Siberian cat is a dramatic, entertaining, talkative, and friendly feline that would fit in perfectly with families of all types and sizes.

You may have seen the hairless Sphynx breed on our list, but don’t let it fool you—just because a cat is hairless doesn’t mean it is automatically hypoallergenic. The main allergen in cats is not its fur, rather a glycoprotein found mainly in the saliva of cats, called Fel d 1.

When a cat cleans itself, Fel d 1 is left all over its fur, and the furrier the cat, the more hair that gets left around the house, spreading the allergen around. Cats that do not have fur still have Fel d 1 in their saliva, but since they have no hair, they don’t spread it around the home quite so much.

Someone who is severely allergic to cats may still find they are allergic to hairless cats – but they are one of the best bets.

There are many types of cats out there that allergy-prone people can enjoy living with, as is evidenced by this list. Do you know any hypoallergenic or lower allergenic breeds that we missed? Which hypoallergenic cat breed is your favorite? Let us know your thoughts in the comments section below!

Related Read: 15 Cat Breeds That Don’t Shed Much (With Pictures)

Curly-haired cats are extremely rare, and this anomaly indicates that the cat is actually missing at least one layer of…
The category

My Cat Was Bitten by a Spider – What Should I Do? (Our Vet Answers)

Cats are natural hunters. This instinctual behavior has been retained from their ancestors who had to hunt frequently to satisfy…
The category

A quick trim can keep your cat cool while minimizing the risk of matting and knotting. Whether your feline friend…