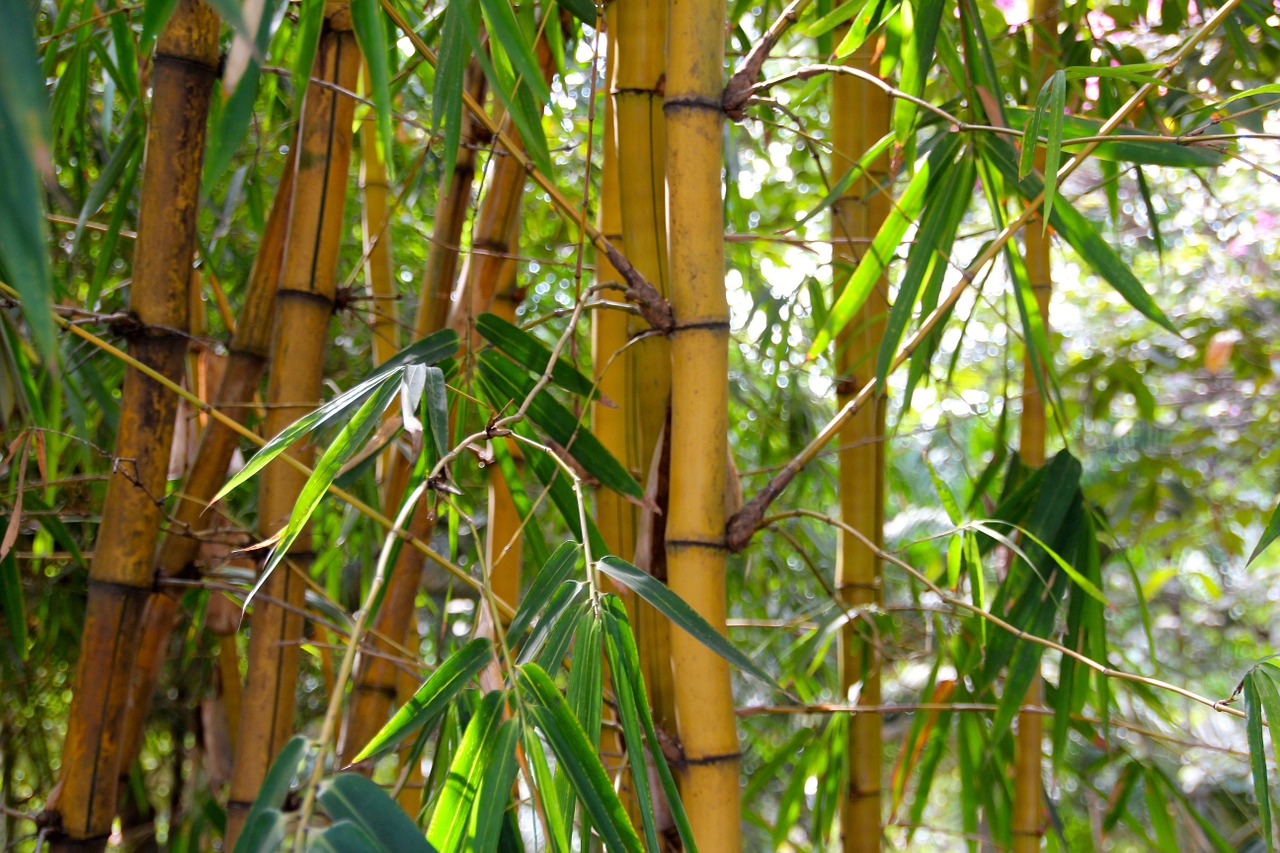 True bamboo is the species called Bambusoideae. This is considered safe for all pets to eat, including cats and dogs. Its high protein level means that bamboo can be beneficial to your feline friend.

However, several other plants and flowers contain the word bamboo but are not bamboo at all. Some, such as lucky bamboo and heavenly bamboo can be dangerous for your cat.

While bamboo might be safe for your pets, there are steps that you can take to safely prevent your cat from eating the leaves and shoots and preventing the bamboo in your home from looking weathered and beaten.

Bamboo is an evergreen perennial plant. The plant usually has hollow stems and some species can grow up to 3 feet in just 24 hours. The giant bamboo is the largest member of the grass family.

The plant is popular as a food source, as well as a building material, especially across Asia. It grows quickly, is easy to harvest, and is very strong for its size. It is as strong as other forms of building timber.

Bamboo May Be Good For Your Cats

As a culinary ingredient, bamboo shoots need to be prepared properly before being eaten. The raw, young shoots contain taxiphyllin, which produces cyanide once it’s in the gut. Some animals, such as the golden bamboo lemur, can eat much more raw bamboo shoots than a person could eat.

It is possible to buy tins or fresh shoots of bamboo to add to culinary dishes. Used in multiple Asian cuisines, and it is especially popular in Nepalese and Indonesian cooking.

Bamboo can consist of as much as 22% protein, which makes it a nutritious plant for your cat. Although it shouldn’t be considered a part of their daily diet, because cats will benefit more from animal-based protein than plant-based, this confirms that the ingredient is safe for your cat to eat.

As well as being a popular addition to Asian cuisine, bamboo also makes a popular house and garden plant. It grows quickly, makes a satisfying sound when blown in the wind, and is easy to care for. Its popularity in the home and garden means that it is not uncommon for cats to chew on the leaves and eat the shoots.

Fortunately, true bamboo is safe for feline consumption. It is not toxic so your cat can eat the plant.

Is Lucky Bamboo Toxic To Cats?

While true bamboo is safe for your cat to eat, confusion exists because many plants contain the word bamboo but are not bamboo. Two of the most common are heavenly bamboo, also called sacred bamboo, and lucky bamboo, which may also be known as corn plant, cornstalk plant, or a money tree.

Lucky bamboo is toxic to cats, therefore, and should not be eaten by felines at all.

Is Golden Bamboo Toxic To Cats?

Golden bamboo is a type of bamboo. It is one of the most common varieties in the US and is available from garden centers and stores. It can be found indoors and outdoors. It is safe to eat, although care should be taken with young shoots.

How To Stop Your Cats from Eating Bamboo

Even if it is safe for cats to eat bamboo, you don’t necessarily want your houseplants or your garden shoots being eaten or chewed all the time. Cats can enjoy the taste of some plants, including bamboo, which means that they will return time and time again for more helpings.

Most cats dislike the flavor and smell of citrus. Spray watered down lemon juice on and around the plant. The smell should be enough to prevent your cat from chewing the plant. If they do take a bite, the taste of citrus will deter them even further.

Is Bamboo Toxic To Cats?

Bamboo is a fast-growing plant. It is popular as a building material and in Asian dishes. It is a perennial plant, and it makes an attractive sound when it rustles in the wind, too. Fortunately, it is considered safe for cats to eat, as long as it is true bamboo. Some plants that contain the word bamboo are not bamboo plants and can be quite poisonous to cats.

As much as we love cats, it doesn’t mean we always want them rooting around. After all, a cat can…
The category

26 Things To Feed Your Cat When Out of Cat Food

When it comes to being a responsible cat parent, there are few worse feelings than getting home from the grocery…
The category