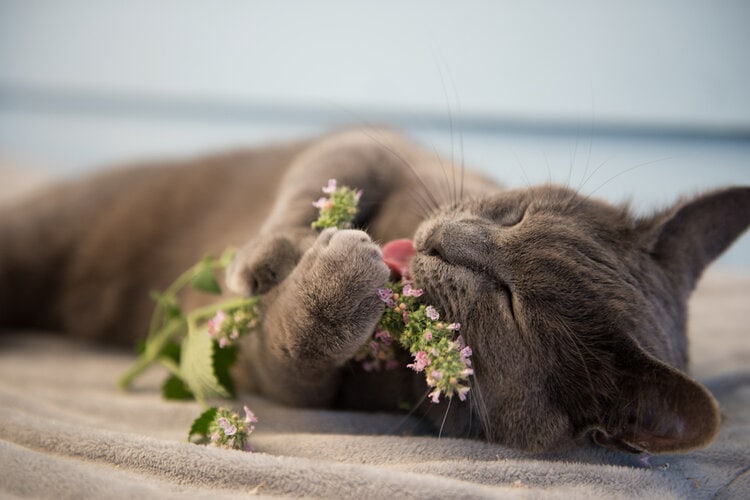 Given that catnip is, you know, named for cats, you’d think that it would absolutely be safe for them. Surprisingly, however, it’s not quite clear exactly how safe catnip actually is for your furry little friend.

That doesn’t mean it’s dangerous, though. It’s just that there hasn’t been much research done on it either way.

In this article, we’ll examine everything we know about catnip, including its effects on cats, how much is too much, and whether it actually makes your cat high.

Is Catnip Safe for Cats?

There haven’t really been any long-term studies evaluating catnip’s effects on cats. We do know that it’s not terribly toxic to them, but we also know that if ingested in large quantities, it can cause an upset stomach.

Beyond those things, though, it’s a mystery.

The good news is that cats are generally good at keeping themselves in check, so it’s unlikely that your cat will eat too much on their own. They usually know when to throw in the towel, and they always have a designated driver arranged before the catnip comes out.

It’s important to note, though, that while catnip might not seriously hurt your cat, what they do while on the catnip can harm them. If they start racing all over the place, they can hurt themselves in a variety of ways, especially since they often lose some of their renowned agility and coordination while on catnip.

There’s no reason to be afraid of catnip, so don’t hide it from your cat unless they have a track record of going overboard on the stuff. At the same time, don’t force it on them either, as it could potentially lead to minor health issues.

Can Catnip Be Healthy for Cats?

While catnip can potentially cause issues for your cat, that doesn’t mean it’s without its benefits. When used in moderation, it can help your cat in a variety of ways.

However, catnip doesn’t seem to have any nutritional value for cats, so don’t look for any benefits in that regard. Instead, it’s better used as a behavior-changing tool.

For one thing, it’s a great way to get a sedentary feline up and moving again. If your cat refuses to get out of bed, a little whiff of catnip may be just what they need to get a little exercise in.

You can also use it to destress them before potentially traumatic events, like moves or trips to the vet. While catnip is mostly known for revving cats up, it can also act as a mild sedative, so giving them a taste before putting them in the car can help keep their anxiety at a manageable level.

Catnip can also be used to modify problematic behaviors. If your cat is refusing to use the litterbox or scratching up your furniture instead of that pricey new scratching post, you can sprinkle catnip in the area to attract them to it. This increases the chances that they’ll behave in the way you want, and it doesn’t require any punishment on your part.

What Does Catnip Do to Cats?

You may think you already know the answer to this question: It causes them to go absolutely wild.

However, the actual way in which it works is still unknown. We know that the active ingredient is an oil called nepetalactone and that its smell stimulates a whole bunch of neurons in your cat’s brains. But why?

Again, we don’t know. The best guess is that it mimics the pheromones that a female cat would emit, causing a euphoric reaction.

The effects are short-lasting, however, and they’re usually gone within a half hour. In that time, your cat can experience a variety of effects, ranging from mania to drowsiness. It may even cause hallucinations, which is why you sometimes see cats pawing at invisible mice.

The effects can change depending on how the catnip is encountered. If it’s ingested, it’s more likely to act as a sedative, whereas sniffed catnip often behaves like a stimulant.

So, What’s the Verdict? Is Catnip Safe for Cats?

Catnip is safe for cats, at least in limited doses. Fortunately, it’s very rare for a cat to want to consume catnip in dangerous quantities, so you don’t need to worry about leaving the bag out for your kitty to find.

The worst thing that’s likely to happen if your cat consumes too much catnip is a slight upset stomach. Given the benefits that catnip can provide — like stress relief and help with certain behavioral issues —dealing with a little cat vomit is a small price to pay.