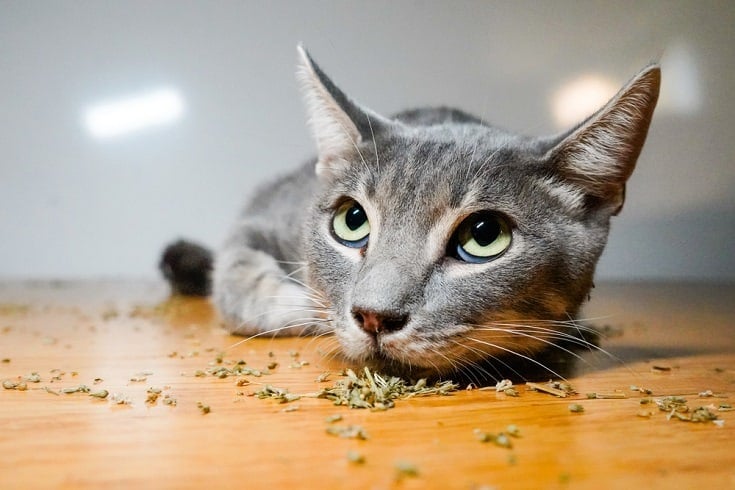 For cats that are sensitive to catnip, their reaction to the herb can be intense! It’s clear that cats love catnip, and it has been proven to be completely safe for adult cats. But is it also safe for kittens?

Indeed, catnip is completely safe for kittens. But not all kittens will react to it, so it shouldn’t be given to all kittens. Let’s take a closer look and figure out when it’s appropriate to offer your kitten some catnip.

Catnip sounds like it’s specifically meant for cats, but it’s actually just a plant in the mint family. And it’s not just for cats either. This herb has been long been used by humans for its sedative effect, which is why people have been growing it for centuries.

Catnip contains a specific compound that drives cats crazy; nepetalactone. As soon as your cat smells this compound, it drives them crazy. The reason why isn’t entirely clear, though it’s believed that the nepetalactone could replicate feline pheromones that are associated with mating, which would be the cause of their erratic behavior that’s associated with catnip.

Even though the plant is called catnip, there’s no guarantee that your cat will like it. Even though many cats do love catnip, the truth is that only about half of cats are even susceptible to its effects. Naturally, cats who don’t get any effect from catnip aren’t going to be attracted to it in the same way other cats are.

Is It Safe for Kittens to Eat Catnip?

Catnip poses no harm to cats or kittens. It’s a safe substance for them to smell and consume. Even kittens are at no risk from eating catnip.

But that doesn’t mean you should feed them too much of it. Like with all things, moderation is generally the best idea. If you give your kitten too much catnip, you can cause an upset stomach, though that’s about the extent of the damage you might cause.

How Early Can Kittens be Given Catnip?

Even for very young kittens who are just a month or two old, catnip isn’t dangerous or harmful and it won’t hurt your kitten in any way. That doesn’t mean you should give catnip to a young kitten though.

First of all, as we mentioned, not all cats are susceptible to the effects of catnip. But even the cats that have this trait aren’t susceptible from birth. It takes a few months for the effects to emerge.

That said, if you do give catnip to your kitten earlier, it should be completely safe them, they just won’t feel any effects from it.

How Should I Give Catnip to my Cat?

Cats can feel the effects of catnip either by smelling it or eating it. Usually, it’s best to let them smell it first, then eat it if they want. As you’ll see, your cat will get plenty of reaction just from the scent, and they’re likely to get a completely different reaction from eating it.

Catnip comes in many forms today. You can get powdered catnip that you can easily sprinkle on your cat’s food or on a toy, such as the Yeowww! Organic Catnip that’s 100% organically-grown and free from pesticides and chemicals.

Alternatively, you could try a cat toy that’s prefilled with Catnip, like this Catnip Banana Cat Toy.

Another easy option is a catnip spray like the SmartyKat Catnip Mist Spray. It’s simple to apply on anything and makes less of a mess than sprinkling catnip on the floor, toys, or other items.

What Effects Can Catnip Cause in Cats?

Cats don’t all have the same reaction to catnip. Many cats even have a different reaction to smelling and eating catnip, usually the opposite reaction.

For a lot of cats, smelling catnip can make them go crazy. They’ll start acting erratically, running around the room, rubbing their face on the floor, rolling around, acting hyperactive, and more.

If they eat catnip, the same cats will often have the opposite reaction. They might mellow out and just lie down, seemingly zoned out.

For some cats, they can become aggressive after eating or smelling catnip. This is especially true of male cats. If this happens with your cat, it’s best just to forgo the catnip because you’re likely to see the same reaction again.

A cat’s reaction to catnip will last about 10 minutes most times. They won’t be able to feel the effects of another dose right away; it will probably take about two hours before they’re susceptible to its feeling again.

Catnip is a great treat for cats that can really get them excited and acting hilariously. This herb is completely safe for cats and also safe for kittens. Still, there’s no point giving catnip to a kitten who’s younger than six months since most haven’t developed the ability to feel its effects yet.

You can give catnip to your cat in a toy, on their food, or sprayed onto their favorite scratching post. Just get the camera ready to enjoy their humorous antics afterward!