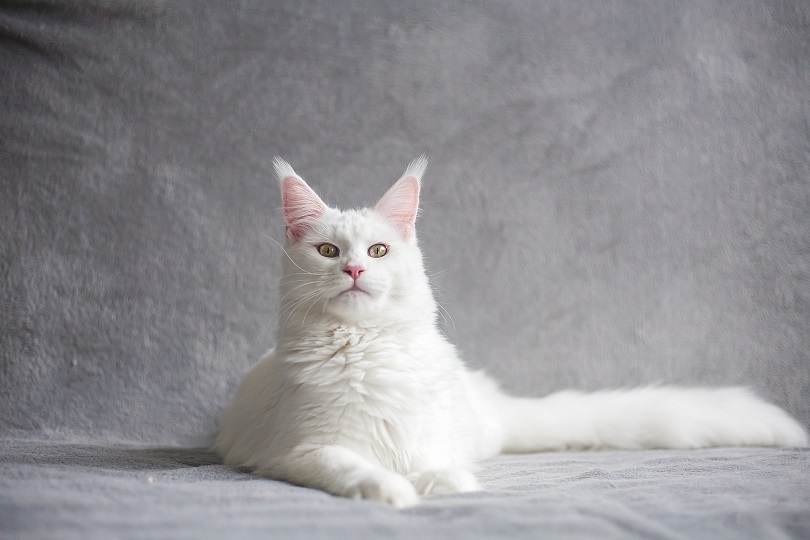 Maine Coons are known as the gentle giants of the feline world. They’re gigantic compared to most house cats, reaching weights of up to 35 pounds. The longest Maine Coon ever recorded was measured at 48.5 inches from the tip of its nose to the end of its tail, and was immortalized in the 2010 Guinness Book of World Records. Of course, most Maine Coons don’t reach this incredible size, but they’re all pretty sizable felines, nonetheless.

But many Maine Coons aren’t purebred, though it can be very difficult to tell. In fact, there’s only one way to be absolutely certain, which we’ll discuss as well. But short of that one definite method, there are several other clues you can use to determine whether your Maine Coon is purebred or mixed.

1. Compare Their Size and Weight

Maine Coons are some of the biggest domestic cats around. To be fair, even mixed Maine Coons are going to be sizable compared to other breeds, but your cat’s size can give you some distinct clues about its lineage.

You can also compare your cat’s height and length. While the largest Maine Coon on record is over four feet long from tip to tip, most will be well short of this. Still, they can often reach heights up to 16 inches and lengths in excess of 36 inches. If your cat reaches measurements close to these, you can bet that it’s purebred.

Maine Coons don’t mature as quickly as other breeds of feline. They have large bodies and brains that take a long time to develop. As such, you can get a good clue as to your cat’s genetics by paying attention to how long it takes for them to reach maturity.

Generally speaking, Maine Coons take about five years to reach full maturity. But many cat breeds reach maturity much quicker. If your Coon reaches maturity by two or three years old, it’s a good indication that your Coon is a mixed breed.

For another clue, you can take a close look at your cat’s coat. Maine Coons have quite distinct coats. They’re dual-layered coats with a silky undercoat and long guard hairs. More importantly, purebred Maine Coons have a thick, puffy area of fur around their necks that’s somewhat similar to the mane of a lion.

Mixed Coons can still exhibit this ruff of fur, but it’s usually pretty thin in a mixed breed. A pure Maine Coon will have a thick mass of fur here that’s unmistakable.

Maine Coons are not a streamlined breed. They have thick, rectangular bodies that can make them easier to pick out. If your cat has a streamlined appearance and isn’t stocky and thick, then it’s likely a mixed Coon.

These cats have very muscular bodies with broad chests and elongated torsos. While this might be difficult to discern just looking at your cat, if you compare your cat to pictures of pure Maine Coons, it should give you a solid comparison point to determine whether your Coon’s body shape is that of a pure Maine Coon.

Your cat’s ears and nose can give you some more clues to help you determine whether they’re a pure or mixed Coon. Pure Coons will have large ears that are set directly on top of the head. They’re not as pointy as other breeds, though they’re very furry with long hairs on the tips and insides of their ears to keep them warm during freezing cold winters.

If your cat’s ears are set on the sides of its head or they’re very pointy, then your cat is likely mixed. Likewise, if they’re lacking those long tufts of hair on the inside and the tips, then it’s likely because your Coon is mixed.

Also, pure Coons have very straight noses while mixed breeds often have a flat nose. So, if your Coon has a flat nose, it’s probably a mix.

6. Eyes of a Predator

One stand-out feature of Maine Coons is their eyes. Their eyes have a markedly wild look, making them look like the predators they can be. Look for eyes that are more squinted than other cats, making them look devious and cunning.

Main Coons have some seriously bushy tails that can reach impressive lengths of up to 16 inches. They’re full and bushy, similar to a raccoon’s tail. If your cat’s tail isn’t thick and bushy with fluffy fur, then it’s probably a mixed breed. Likewise, if your Coon has a short tail that doesn’t reach at least 10 inches or more, then it’s probably not a pure Coon.

This breed has a very specific trait that’s pretty rare in the rest of the feline world. Many Maine Coons have a polydactyl gene. This means that they have a sixth toe on their paws. Granted, not every Maine Coon has this feature, but if your cat does, it’s most likely due to their pure Coon genetics.

While all of the steps we’ve laid out so far can give you clues as to your cat’s lineage, none of these are guaranteed ways to make a determination. The only way to be absolutely certain is through genetic testing. At one point in time, just a few years ago, this would have seemed like a miracle. But today, it’s an affordable and easy test to administer.

You can purchase a genetic testing kit from several different companies. You’ll take a small sample of your cat and then send it to a lab for processing. When you get the results, you’ll have no doubt as to your cat’s lineage. Even better, you’ll also get information regarding their genetic disease markers and more, illuminating much that you probably don’t know about your furry friend.

If you follow these steps, you’ll be able to gather quite a few clues about your cat’s genetics. These aren’t definitive answers though. Each step offers you one more clue to put together the puzzle of your cat’s ancestry. That said, if you want to be 100% certain, you can always get an easy at-home genetic testing kit and send it in to a lab. When you get the results back, there will be no more questions. Short of that, follow each step here and put together the clues until you have a confident answer either way.

10 Easy & Fun Tricks to Teach Your Cat (With Videos)

You might never have thought about teaching your cat tricks, but trust us, they love it! Cats are super intelligent,…
The category

The long-haired cousin to the ever-popular Abyssinian, Somali cats have a fascinating history and unknown origin. With a genetic lineage…
The category

The British may be known for their staunch tradition, but when it comes to cats, they’re pioneers of progressive breeding…