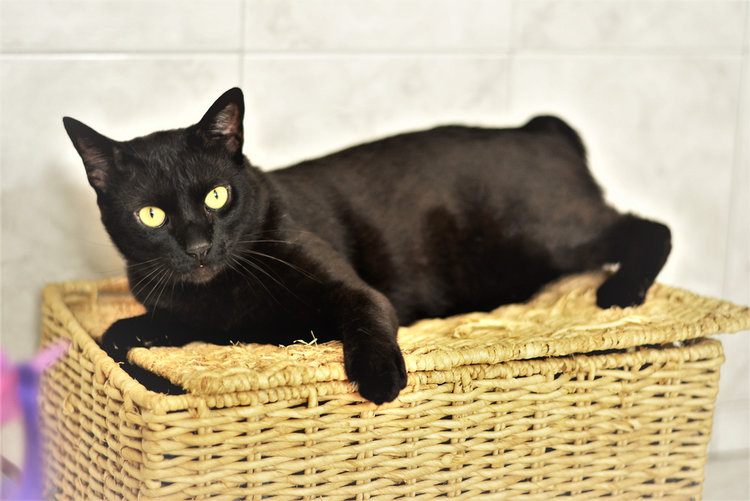 Originating in China about a thousand years ago and later gifted to the emperor of Japan in the 7th century, the Japanese bobtail cat has become a popular house cat across the world. It’s even got a place in Japanese tradition as a symbol of good luck. Once revered in Japan, they were used to save the country’s prominent silk industry in the 1600s when the silkworms that they relied on were being eaten by rodents.

Today, these intelligent cats make playful pets with a loving temperament. Not all cats are affectionate, but the Japanese bobtail cat definitely is, and they need a lot of attention to stay happy and healthy. They don’t like being left alone for long periods and enjoy consistent interaction. Often, they’ll show their satisfaction with melodic vocal noises that resemble singing.

One of the main distinguishing characteristics of the Japanese bobtail cat is its short tail. They’re less than three inches long and look like little puffs of fur. This short tail is a genetic mutation, but it’s not a genetic disorder. Another defining physical trait of these cats is their elongated back legs that make them look very muscular.

Japanese Bobtail Kittens – Before You Buy…

With a need for nearly constant attention and affection, the Japanese bobtail cat is best suited for families or individuals who will be around to provide that interaction. Individuals who are gone at work for over 40 hours each week may not be a great fit for this cat.

This cat is also prone to overeating. Known to commonly beg for food, it will easily become overweight or even possibly obese if you don’t take care to measure their food portions and control their caloric intake.

Since being imported to the United States, the Japanese bobtail cat has been accepted for championship status in reputable cat associations such as the CFA, which has accepted both the shorthair bobtail in 1976 and the longhair bobtail in 1993. Because they’re valued as competition cats, purchasing one from a breeder can be quite expensive.

If you find a reputable breeder for these adorable felines, you can expect to spend anywhere between $600 and $1600 to bring your new cat home. Alternatively, you can often find these cats up for adoption for a fraction of the price if you don’t plan to use them for competition.

1. They’re Known as the “Singing Cats”

Most cats make some affectionate noises like purring. But Japanese bobtail cats are unique in the way that they communicate. They have soft voices that can make almost an entire scale worth of different tones, causing them to sound very melodic.

These cats adore human companionship so much that when you speak to one, it will often “sing” back to you. Over time, this trait has helped them to become known as the singing cats.

Naturally full of energy, these cats love to play and pounce. But they’re also physically built to excel at this. With hind legs that are longer than their front legs, these cats have an impressive ability to jump. They’re also extremely agile, making short time through the course while truly enjoying themselves.

But their athleticism doesn’t stop at agility courses. These felines also love to play fetch and even soccer. They’re also known to play with other cats and even dogs, pouncing and rolling around with each other in delight.

3. One of the Oldest Natural Cat Breeds

Though they’re called Japanese bobtails, originally, these cats started in China. According to the Cat Fanciers’ Association (CFA), written records seem to show these cats first arriving in Japan at least a thousand years ago, which makes them one of the oldest naturally occurring cat breeds around. Since then, they’ve held a constant place in Japanese folklore as bringers of good luck after one supposedly led a man away from a tree just before it was hit by lightning.

Affectionate and loving, these attention-seeking cats want to be the center of your world. You’ll find it by your side most of the time, even accompanying you when you answer the door for guests. If you’re relaxing, expect this cat to be on your lap, or at least by your side. If you’re looking for a cat that doesn’t have the same attitude that cats are known for, then the Japanese bobtail might be the solution.

Aside from their highly affectionate nature, these cats are also very energetic. They love to play around with toys, people, and other pets. They’ve been known to play fetch and even soccer, and as we mentioned earlier, they’re naturals at the feline agility course, which they love to perform!

Japanese bobtail cats make great cats for families. In fact, they may be better suited for families than individuals because of their need for nearly-constant affection and attention. If there’s not going to be anyone home to show the cat some love for a good portion of each day, then you’d be better off choosing a breed that doesn’t need so much attention. This type of cat won’t be happy unless it feels like it’s the center of your world.

For families with children, these cats are an excellent choice. They’re very gentle and playful around kids and generally seem to love them.

The Japanese bobtail cat is just friendly all the way around. Not only will it get along with you and your children, but it will also befriend your other pets right away. This even includes dogs and other less common animals, making this cat a great choice for households with other pets.

Things to Know When Owning a Japanese Bobtail Cat:

A generally healthy cat, there are no specific food and diet recommendations. However, Japanese bobtails are known overeaters, and they often beg for food. This overeating can lead to being overweight, and eventually, even obesity.

To ensure that your cat doesn’t get overweight, you’ll want to limit the number of table scraps you feed them and pay attention to their overall caloric intake.

Naturally energetic and playful, these cats want to expend energy a lot. They’ll play with you, kids, toys, and other pets often. These cats also love to do feline agility courses, which they tend to excel at.

All of that energy will need an outlet, so be sure that there’s some way for your cat to play and engage. Personal attention from people is the best since it will also give your cat the human attention they crave, but other pets and toys are great options too. You can’t always be there to play with them!

Japanese bobtail cats are highly intelligent, making them great at learning tricks and commands. You won’t have a very difficult time teaching your cat the basic commands if you can get them to settle down long enough.

There are two main variations of the Japanese bobtail cat; the shorthair and longhair varieties. Both are highly sought-after cats with similar traits.

Neither type of cat has an undercoat, so their fur won’t mat and their grooming is very simple. You can just comb or brush their coat once a week to remove any dead or loose hair.

A medium-sized cat overall, males tend to be a bit bigger than females. Females tend to weigh between 5-8 pounds, while males generally weigh 8-12 pounds. The males are also usually just a little bit taller than their female counterparts.

If you want a cat that will actually show you love in return, then the Japanese bobtail cat is a great choice. They’re very affectionate and want to give and receive love all the time. They make great companions and get along well with both children and pets, so they’re the perfect cat for families.

Highly intelligent and easy to train, you shouldn’t have many problems with this breed as they’re relatively easy-going cats. But you will need to make sure you have the time to give them the ample attention they require as well as a way to expend their boundless energy. If you can’t do that, then you may look for a different breed.

Excellent at feline agility courses and accepted for championship status among leading cat associations, this cat is a great choice for any type of competition or show. But this also means that getting one from a breeder comes with a very high price tag. For those looking to add this loving cat to their family without the high expense, they can often be found available for adoption for a modest fee.

Can Cats Eat Chicken? Everything You Need to Know!

Your cat probably loves chicken. Most cats usually do. It is found in a lot of cat food, both canned…
The category

If you’re looking for a hairless cat breed, then you need to meet the Ukrainian Levkoy! This breed is so…
The category

Persian cats are notorious for their long and soft fur coats, and if you are a Persian owner, you’ll know…