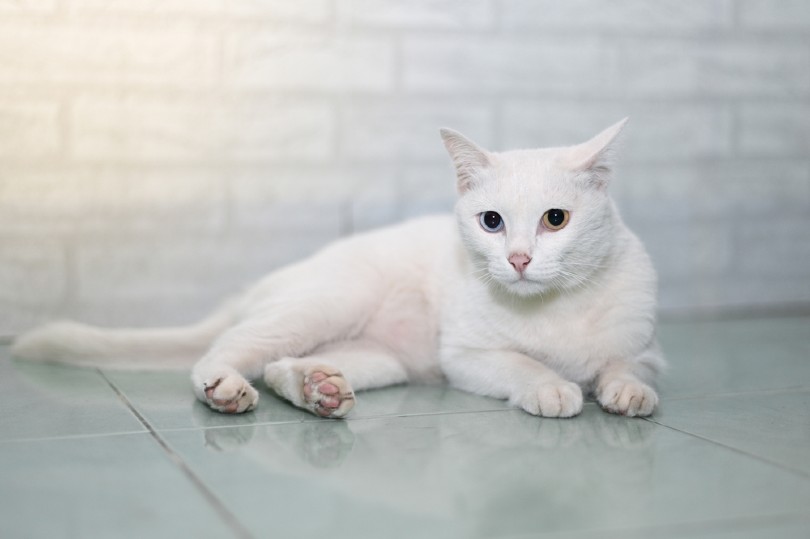 The Kao Manee is a rare breed of white cat from Thailand. Its line goes back hundreds of years, and its name means White Gem. Their coat is short and smooth, and their eyes can be blue or gold, with some rare cats sporting one gold eye and one blue one. It’s intelligent, vocal, and has a muscular body. The Kao Manee began entering competitions in 2010 once the Cat Fanciers Association recognized it.

Khao Manee Puppies – Before You Buy…

Because the Kao Manee is so rare, you can expect to pay between $1500 and $3000. Cats with one blue eye and one gold eye will be the most expensive, but the nearest breeder’s location and obtaining breeding rights can also influence the cost significantly. Some cats have fetched as much as $10,000. Unfortunately, due to the breed’s rarity, it’s unlikely to be found at a local shelter, but it doesn’t hurt to check.

There are several other costs to consider, as well. It will need shots, food, toys, treats, and more that will quickly become expensive. These ongoing costs can surprise someone who has not owned a cat previously.

1. Thailand strictly protected the Kao Manee, and it was not allowed out of the country until 1999.

3. The Treatise of Cats, a 19th-century cat illustrations book from Thailand, mentions the Kao Manee.

Temperament & Intelligence of the Khao Manee

Kao Manee cats are devoted to their owners and will often stay within a few feet of a family member. It’s intelligent and vocal, traits it will use to convince you to give it what it wants. Many owners also comment that it will use its intelligence to be mischievous, especially if it feels left out or has been alone too long. They also like playing fetch, mental stimulation games, like food puzzles, and snuggling up on the couch with their owner.

Yes, the Kao Manee makes an excellent family pet. It’s extremely friendly and likes to stay close to family members. It enjoys games and will use its intelligence to entertain children. Its short hair is also less likely to get pulled by toddlers.

Yes, the Kao Manee gets along well with other cats and cohabitates well with most dog breeds. It can become aggressive toward smaller rodents like mice but won’t bother rabbit or most reptiles.

Things to Know When Owning a Khao Manee:

Here is a list of things you should consider before purchasing a Kao Manee.

The Kao Manee requires the same diet as any cat breed. Cats are carnivorous, so you should avoid food that is high in carbohydrates that contains ingredients like corn, wheat, and soy. A diet high in protein with whole meat like chicken, beef, or turkey listed as the first ingredient is best. Wet food is suitable for kittens and cats suffering from constipation because it’s very rich and high in moisture. However, dry food is better for adult cats because the crunchy kibble helps to scrub away tartar, keeping the teeth cleaner and preventing the onset of dental disease.

Cats are most active from dusk until dawn and will get most of the exercise they need during that time, especially if you have a large home they can explore. However, you should strive to play with your Kao Manee for 30 – 60-minutes per day. Fetch and laser pens are ideal ways to make sure your cat is active enough to maintain a healthy weight.

Your Kao Manee is intelligent and easy to train to use a litter box or a scratching pad. They will also learn several words and their meaning and will come running when you call them. Like most cats, your Kao Manee will respond best to treats, positive reinforcement, and patience.

The hair on a Kao Manee is short and close to the body, so it doesn’t require more than an occasional brushing. You may need to trim the nails every few weeks if they don’t have a scratching post and instead use your furniture or curtains.

Frequent teeth brushing is also very important. You should brush the teeth every five to seven days to help reduce the risk of dental disease. It’s important to use a cat-safe toothpaste because many human-grade kinds of toothpaste contain an artificial sweetener called xylitol that can be dangerous and even deadly to your Kao Manee. Many brands include a standard and a finger toothbrush to help you get the job done. Getting your pet used to the brushing while it’s still a kitten will produce the best results.

The Kao Manee is considered a healthy breed with very few health concerns. However, there are still a few things you should consider.

As we mentioned earlier, dental disease is a serious concern in cats, and some experts say up to 90% of cats over four years old suffer from some form of dental disease. The best way to protect your cat from the onset of dental disease is to feed it dry cat food, which can help scrape away plaque and tartar. Regular brushing with a cat-safe toothpaste is also essential. You can use a toothbrush similar to ours, or some brushes fit over the finger to help make the task a little easier. A lack of brushing can lead to gingivitis, a condition where the gums become red and inflamed. Periodontitis is an advanced form of gingivitis that causes teeth to come loose and fall out, and tooth reabsorption can also occur and is very common in many cat breeds.

Obesity is another common problem in all cat breeds. Experts suggest that 35% of American cats suffer from the disease and up to 50% of the cats over 5-years of age. This average is slightly higher in the UK. Obesity can lead to several health problems, including many types of cancer, diabetes, hypertension, heart disease, osteoarthritis, bladder stones, and less tolerance to heat.

The best way to prevent obesity in your Kao Manee is to follow the feeding instructions on the bag closely. Limit treats to no more than 10% of their daily calories, and help them get plenty of activity. Putting your cat on a strict diet can be dangerous, and it puts them at risk of a possibly life-threatening disease called hepatic lipidosis. This disease causes a build-up of fat in the liver due to a change in the metabolic rate.

Your cat’s digestive system is very sensitive, and it doesn’t take much to upset it, which can lead to diarrhea or constipation. High-quality food that doesn’t contain harmful chemical preservatives or artificial dyes can reduce the frequency, as can food without corn, wheat, or soy products. If you notice a new brand of food or treat is causing diarrhea, switch brands immediately.

Intestinal parasites like hookworms, roundworms, threadworms, and whipworms, can also be sources of diarrhea and underlying health problems, like irritable bowel syndrome and malabsorption. Eating foods they shouldn’t, like garbage, dead animals, grasses, and plants, is also a common cause of diarrhea.

A water fountain can help ensure your Kao Manee gets enough fluids to prevent constipation. Foods containing probiotics can also help build up the good bacteria in your cats’ gut, helping them break down and absorb their food more easily. You can also include probiotic supplements if the food does not contain them.

The male and female Kao Manee are virtually the same, with very little difference between them in size or personality. Some owners suggest that the males are slightly more vocal, but that Is purely subjective.

The Kao Manee makes a great pet and companion. Its vocal nature is entertaining and gives you a better idea of how it feels or what it wants. It has very short hair that’s easy to maintain and doesn’t leave a lot of fur around the home. It’s soft and cuddly with captivating eyes, especially if you get two different color eyes. The only downside is that it’s a rare breed and can be quite expensive.

We hope you have enjoyed our look into these attractive cats and have decided to get one for your next pet. If we have answered your questions, please share this guide to the Kao Manee on Facebook and Twitter.

How to Train Your Cat (Yes, it is Possible)

Cats have reputations that precede them. Even cats who are incredibly affectionate, and are what some owners might call “dog-like,”…
The category

Can Cats Eat Spicy Foods? What You Need to Know!

This is a somewhat tricky question – as what counts as “spicy food” can vary. Many substances can make food…
The category

It can be worrying if you suddenly start to notice that your cat is pacing. If this turns into a…