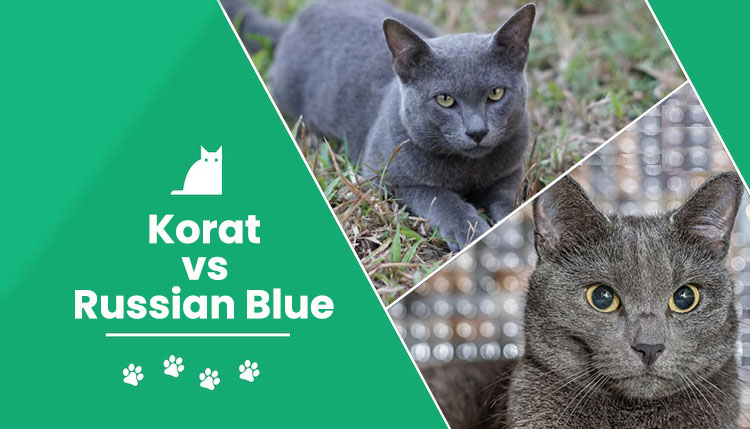 Korat Cats and Russian Blues share a striking resemblance, even though the countries they hail from are more than 3,000 miles apart. Both breeds are known for their shiny gray-blue coats and trademark emerald-green eyes.

But the similarities don’t stop there. These two breeds are quite close in temperament as well. Both are highly intelligent animals with similar personality traits. Some key differences do separate these breeds though, and they can make one preferable to the other, depending on what you’re looking for.

Do you want to give up control of your household to a feline ruler in exchange for good luck for the next 10-15 years? Or would you prefer the dignified creature that holds a grudge, hates changes, and could be around for 20 years? To learn more about these differences and others, let’s take a closer look at these two cat breeds.

Korat cats are thought to be good luck in Thailand, their homeland. Thailand used to be called Siam, and as the favored cats of the Siamese, Korats are the true cats of Siam. They’re steeped in superstition and mystery in their country of origin, so they’re rarely purchased. Instead, they must be gifted, and always in pairs.

It’s possible that this interesting mysticism surrounding this breed and the way that the Thai people hold them in high esteem has something to do with the regal personalities that this breed developed. They’re always sure that they’re the rulers of the household.

Regardless of who else lives in the home, the Korat is king or queen. As long as everyone understands these parameters, Korats seem to be able to get along with everyone. This includes other pets and even dogs. However, Korats do prefer the company of other Korats to that of any other pet, as they are a conceited breed.

Moreover, Korats need a ton of your attention. They don’t want you to be gone all day and will show their displeasure when you are. When you’re home, they want to be attached to you, demanding all of your attention. Anytime you sit down, your lap becomes their favored spot.

Korats are one of the lowest-maintenance cat breeds around. They have a single coat that requires only the bare minimum of upkeep. If you brush their coat out twice a week, they’ll be good. You might need to do an additional weekly brushing in the spring when they’re shedding their winter coat though.

While this breed is considered healthy for the most part, they do have one fatal genetic condition that’s semi-common in the breed. This condition is called gangliosidosis. It shows up around 2-3 months of age and kills around one year. But reputable breeders test for the carrier to ensure that the felines they breed aren’t susceptible to this disease.

Even if you have a completely healthy Korat cat, their lifespans are generally limited to 10-15 years.

These cats are best for people who are home a lot or only work part-time. If you’re away from home for most of every day and there’s no one home to provide attention for your Korat, then you won’t be a great fit. They can get along with other pets, but not if they have a dominant personality as your Korat wants to be in charge. If you have pets with a dominant nature, then this probably isn’t the cat for you.

Russian Blues look very similar to Korats and they share some personality traits, though there are some fundamental differences between them. Like the Korat, Russian Blues are rather rare cats. It’s not certain that these cats are from Russia at all, though it is believed they’re from the Archangel Isles and made their way to northern Europe via ship in the mid-1800s.

This breed is known for their gentle demeanors. They’re relatively calm most of the time, though they do enjoy having good play sessions with their people. However, these cats are distrusting of strangers and likely to disappear when company arrives. They’re quite social with their own family, but rarely warm up to others.

Furthermore, Russian Blues are neat freaks. They want everything absolutely tidy and will make their displeasure known if things aren’t the way they like. This extends to their litter box, which must be kept spotless, lest they opt to use somewhere else instead to give you a blatant message.

These cats are highly intelligent and they understand when they’re the butt of a joke. When this happens, you can expect your cat to be very visibly irritated with you. You can also expect it to last a long time as these creatures definitely hold a grudge.

But this breed doesn’t mind being alone. In fact, they’ll seek out alone time if it’s not freely available. If you work all day, your Russian Blue won’t mind, so long as they get a healthy dose of your attention for the remainder of your free time.

Overall, this is a very hardy breed that’s not susceptible to many known health concerns. There are no genetic diseases that the breed is prone to. They also have very long lifespans and are known to often reach 20 years of age.

While Russian Blues have a double-coat, it’s very easy to care for and requires little maintenance. A simple brushing a few times a week will keep their coat in great condition. Beyond this, only the standard upkeep is necessary, like brushing their teeth and keeping their ears clean.

Russian Blues are great for anyone who is gone for most of the day working a job. If you’re a single person working full-time, a Russian Blue can be exactly the pet you need. They’re not unhappy about being left home alone, and they’ll likely greet you at the door, adoring you in your off-hours. Even better, they’ll be around for up to 20 years, though this could be a dealbreaker for those people who are afraid of a two-decade commitment.

The Main Differences Between Korats and Russian Blues

Truthfully, less separates these breeds than they have in common. They’re pretty similar in many ways, beyond just the fact that they look strikingly similar. But there are two places where the differences between these breeds shine most.

Korats have a great lifespan of 10-15 years. But Russian Blues live much longer; 15-20 years on average. This means a longer time with your furry friend, but also a much longer commitment. Potentially, a Russian Blue could live twice as long as a Korat, which could be a positive or a drawback, depending on your viewpoint.

Korats don’t want to spend time alone. If you’re gone all day every day, your Korat is going to be very displeased and will go to great lengths to show you all the time. This could lead to a stressful living situation for you and your Korat. But if you’re home a lot or you have other family members in the same household who are home a lot, then your Korat might be able to get the attention they need.

But not everyone is in a situation to provide this much attention. Luckily, Russian Blues don’t have the same aversion to being alone. If you’re gone at work every day and there’s no one else at home, your Russian Blue won’t hold it against you. They’ll demand your attention when you’re home, but they won’t be upset about the time you spent away.

Which Breed is Right for You?

While both of these breeds can make excellent companion cats, two major differences are separating them that can make one preferable to you. If you want your cat to be around as long as possible, the Russian Blue offers a longer lifespan of 15-20 years, compared to the 10-15 years you’ll get with a Korat.

For the person who lives alone and is gone a good portion of the time, a Russian Blue is a great choice since they won’t mind the time alone and won’t hold it against you. Korats will be upset if there isn’t someone home all the time, so they’re better for individuals who are generally at home or families that usually have a member at home.

21 Fun Things to Do With Your Cat (Indoors & Outdoors)

If you’re stuck at home wondering what to do with yourself today, we’ve got plenty of ideas for you! We’ve…
The category

Cats love to be above the action, whether on the prowl, relaxing, or sleeping. This is a part of how…
The category