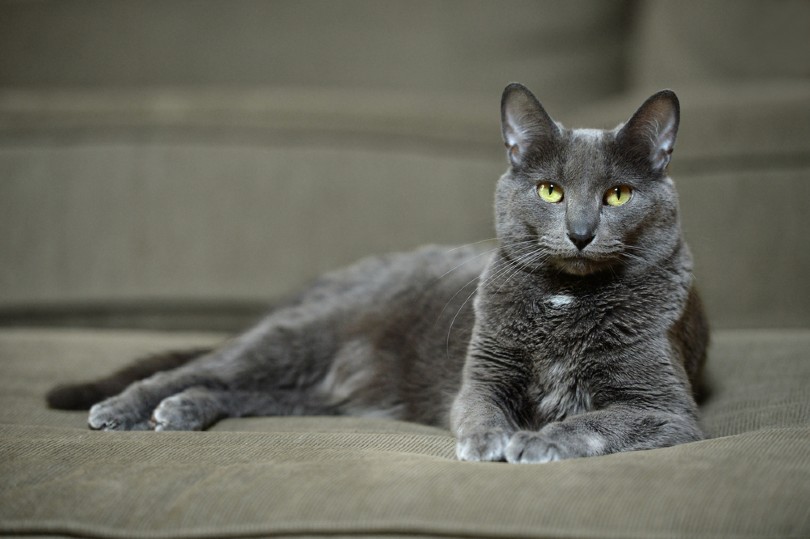 The country currently called Thailand used to be known as Siam. You might expect the Siamese cat to come from a place named Siam, but if you ask a person there about a Siamese cat, they may not know what you’re talking about. Jean L. Johnson is the person who first brought the rare Korat cat to America after living in Thailand for an extended period. When she asked around looking to adopt a Siamese cat, she found that none of her Siamese friends even knew what that was.

Eventually, a pair of Korat cats was sent to Johnson, who was once again living in the United States. This pair of cats was named Nara and Dara, and they arrived on the shores of the US in 1959. These Korat cats are the true cats of Siam and they’re deeply prized animals in their homeland.

Even though this breed is beloved in modern-day Thailand where they come from, they’re still very rare cats there, and in the US as well. Their blue-gray fur and emerald-green eyes give them a distinct appearance with their heart-shaped heads. They’ve won the hearts of the Thai people and people all over the world.

Korat Kittens – Before You Buy…

What’s the Price of Korat Kittens?

Generally, rare cats or felines that are held in such high regard tend to command pretty hefty prices. The Korat is a very rare breed of cat. In Thailand, they’re rarely sold due to superstition and tradition. In the west, care has been taken to prevent in-breeding. All of which should point to an expensive kitten.

However, Korat kittens aren’t as expensive as you might think. You can get a Korat kitten in America from a reputable breeder for just $600-$800, pricing them about the same as an average Siamese cat.

Even though these cats are uncommon, you can still find them available for adoption if you put a little time and effort into looking. Adopting a Korat cat can save you quite a bit over purchasing one from a breeder. You could expect to pay about $125-$150 to adopt a cat, saving you 75% or more over buying from a breeder.

Most cats reach maturity between 12 and 18 months of age. However, Korat cats take much longer than this. Most Korats won’t be full-sized until their five years old. Likewise, they won’t become emotionally or mentally mature until this time. Even their emerald-colored eyes, which are a defining feature of the breed, won’t become that iconic color until the cat is between two and four years old.

So, don’t be surprised if your Korat doesn’t actually look like a Korat while they’re a kitten. It’s completely normal and they’ll grow into their distinctive looks by the time they’re about five.

Even today, it’s looked down upon to purchase a Korat for yourself in Thailand, which means that you must be lucky enough to be gifted a pair if you want some of your own. If you’re already that lucky, you probably don’t need the extra luck that a pair of Si-Sawat cats would bring!

3. They’re the True Cats of Siam

If you’re like most people, you probably associate Siamese cats with Siam. It only makes sense. But the truth is that the Korat cat is the real cat of Siam. So, how did the mix up occur? Funny story.

It’s believed that the confusion began when King Rama V decided to give a cat to an English Consul. This was meant to be an emblem of the King’s country; Siam. However, the King loved his Korat cats so much that he didn’t want to give any of them away. Instead, he gifted the English Consul a seal point Siamese cat. From then on, the Siamese cat was considered the cat of Siam in the rest of the world, though the Siamese people have always favored the Korat.

Temperament & Intelligence of the Korat Cat

The Korat cat is the embodiment of nobility. These creatures are rulers in their hearts and they wear the regal attitude like a crown. They always believe that they’re in charge, regardless of the situation.

Overall, Korats are good-natured animals, though they can be a bit conceited and full of themselves. They seem to get along with most people and prefer company to being alone. In fact, your Korat will reprimand you if you leave them alone for too long. While not as vocal as a Siamese cat, Korats are still very adept at communicating and will certainly get their messages across.

These cats bond closely with their people. They want a lot of your attention and will regularly choose a spot on your lap over any other seat in the house, even if you’re in the middle of doing something.

Korats are gentle cats, though they’re also full of energy. They’re playful and fun-loving with higher than average intelligence. They love puzzles, toys, playtime, and anything that poses a challenge for them to sink their mind and claws into.

Korats are great family pets. They’ll get along with all of the family members, as long as they feel that everyone understands they’re in charge. These cats will even adapt and learn to adopt a new family if necessary; even well into adulthood. They can be great with children as well, though they don’t like loud noises and over-active households. If your kids are generally calm, then they’ll do well with a Korat.

Korats seem to get along with all creatures that don’t question their authority. They do get along best with other Korats, but they can be friendly with dogs, cats, and everyone but rodents. But if any other creature tries to be the dominant member of the household, your Korat isn’t going to get along and likely won’t play nice.

Things to Know When Owning a Korat Cat:

As a generally healthy cat, Korats don’t have any specific dietary needs that you’ll have to work around. However, they are prone to becoming overweight. So, you’ll want to watch how much you’re feeding your Korat and ensure you aren’t contributing to weight gain.

Korats don’t need excessive amounts of exercise. A good play session a few times a day will suffice. However, these cats can walk on a leash like a dog, so if you want to take them on walks and your Korat seems to enjoy it, it’s certainly not going to hurt.

This breed is known for being exceptionally smart. They’re fast learners and quite intuitive. As such, they’re much easier to train than most breeds of feline. You can easily get a Korat to walk on a leash, use a litter box, and more. Just stick to positive reinforcement and only give a stern “no” for behaviors that you don’t approve of. These cats learn quickly and shouldn’t take too much prodding to produce the behaviors you want.

Luckily, Korats have just a single coat and it’s quite easy to care for. Their hair is short and fine and will do well with a short brushing session twice each week. In the spring, your Korat will shed their winter coat and might require a bit of additional grooming.

Aside from minimal maintenance on their coats, Korats only require the basics. Keep their nails trimmed and their ears clean. Additionally, don’t forget to brush their teeth and you’ll have a healthy cat with little upkeep to perform.

Overall, Korats are a very healthy breed. But there are still a few health concerns that need to be considered.

Gangliosidosis: This is a rare genetic disease that affects a large number of Korats. If you purchase your Korat from a reputable breeder, they should have already performed genetic screening to ensure that your kitten doesn’t carry the marker for this deadly disease. It comes in two forms; GM1 and GM2. Unfortunately, gangliosidosis is deadly for affected cats and they’ll die at about one year old.

Obesity: All animals are susceptible to becoming overweight. Korats are likely to overeat if too much food is provided, so it’s important to monitor their intake and prevent this from occurring.

There are no physical or behavioral differences between these smaller cats. However, non-spayed and non-neutered cats may develop unwanted behaviors. “Unfixed” male Korats have a habit of running away, while non-spayed females will be extremely uncomfortable when going into heat.

The Korat is considered to be a good luck charm and they’re highly regarded in their homeland of Thailand; once known as Siam. These are the true cats of Siam, and they’re so steeped in fable and superstition that it’s looked down upon to purchase one. Instead, they must be gifted, and always in pairs. Luckily, in the west, you can simply purchase a Korat if you fancy one. And with such a loving, regal personality, why wouldn’t you?

More than just sophisticated cats, these are highly intelligent animals that can be trained more than most felines. Your Korat will want all of your attention though, so make sure you’re home a lot to provide it. These cats don’t like to be left alone long. But they’ll get along with everyone in your household, pets included, so long as everyone respects the Korat as king or queen of the house.

Can Cats Eat Liver? What You Need to Know!

Liver is packed full of vitamins A and B and contains other essential minerals. In small quantities, it is not…
The category

Cat clippers are great for quick touch-ups between trips to the groomer or to avoid the groomer altogether, but many…
The category

Cats are and have always been one of the most spoiled animals on the planet. They have been revered by…