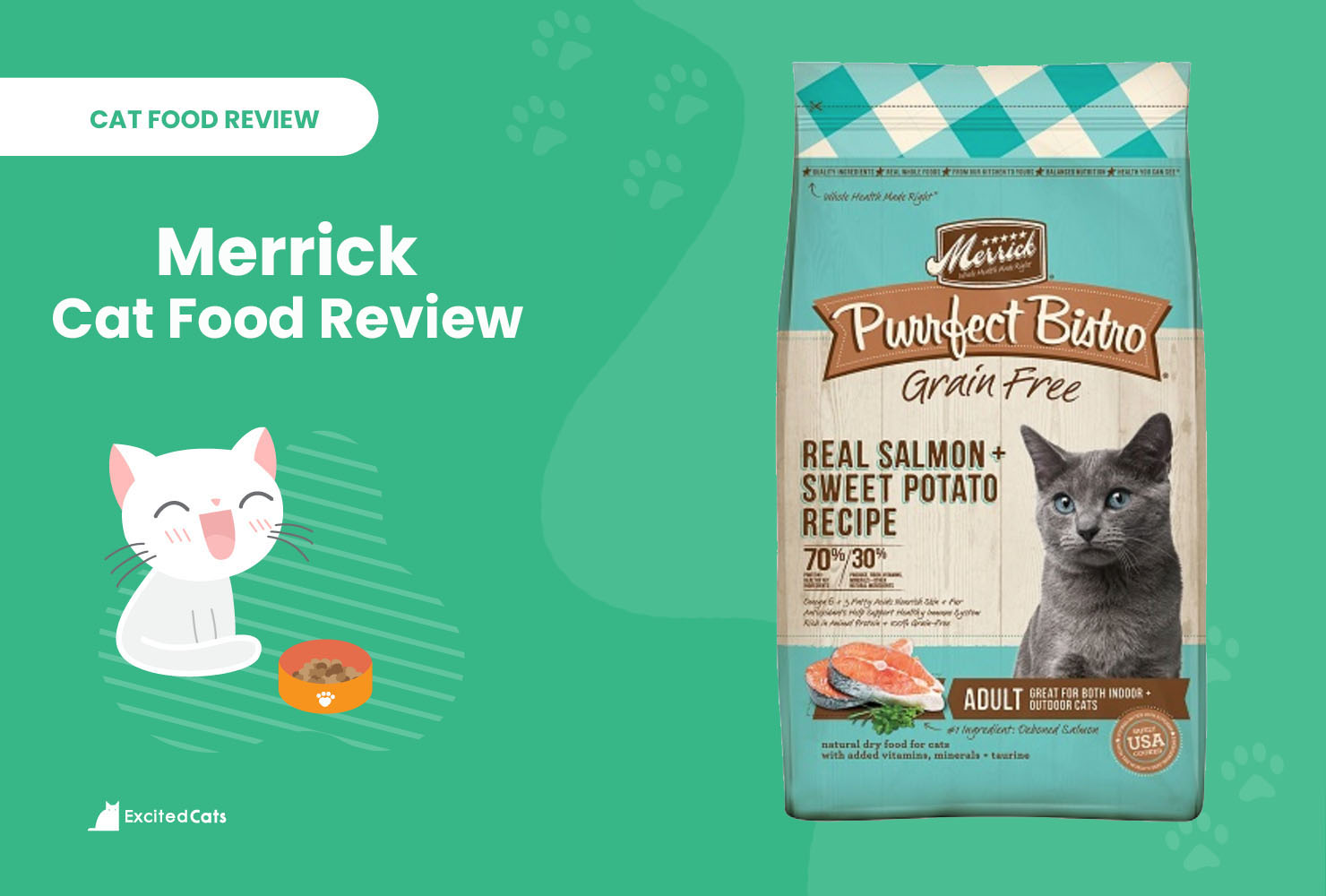 Merrick is a US-based pet food producer that started out producing dog treats but then added dog food and, eventually, cat food to its product line. Now owned by Nestle Purina, the company promises to use natural ingredients, source most of the components in its foods from the USA, and produce high-quality and nutritious foods for pets.

With a selection of both dry and wet foods, Merrick produces specialist lines for seniors cats and kittens, as well as for adult cats. They also have grain-free and diet foods, which are suitable for cats with special dietary requirements. All formulae are rich in omega fatty acids, which helps to maintain a healthy and attractive coat for your cat.

At a Glance: The Best Merrick Cat Food Recipes: 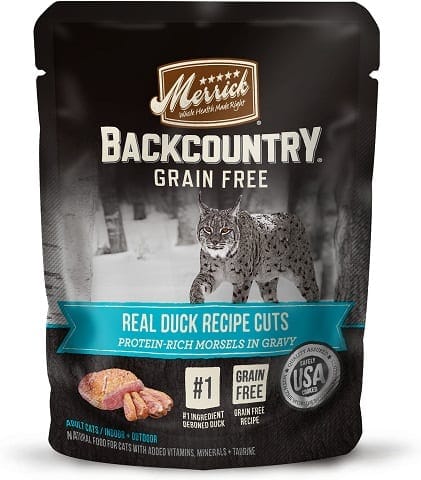 Who Makes Merrick and Where is it Produced?

Merrick was formed in 1988 when founder Garth Merrick started making home-cooked treats for his dog. The company has expanded to include cat food, but they stick to their original mission and the company’s five-star promise:

Merrick was purchased by Nestle Purina in 2015, but they announced that they would not make any changes to the production or management of the pet food line.

Which Types of Cats is Merrick Best Suited For?

Merrick manufactures dog food that is made from fresh ingredients, using no artificial additives. They have dry and wet food and they have ranges for senior cats, kittens, and for those with sensitive stomachs. There are foods suitable for all cats and cat owners.

Merrick produces a range of different foods, and each line and each recipe has its own ingredients. However, a study of the ingredients highlights the following key ingredients, as well as some that are potentially controversial:

Strictly speaking, cats would not have eaten grains when living in the wild. Grain-inclusive foods have been known to cause gastrointestinal upset while proving to be an allergen for some cats, but the majority of felines do not show any negative side effects after eating this type of food. Grains like corn and barley are used in a lot of foods — especially dry foods — because they bulk the food out and provide fiber. Even if your cat can stomach grains, this type of ingredient can be considered lower quality than meat or even vegetable ingredients. All Merrick recipes appear to be free from grain-based ingredients.

It is accepted that the more common a protein source is, the more likely that a cat, or any other animal, may develop an allergic reaction to it. In cat food, the most common allergens are beef, lamb, seafood, dairy, and corn. If your cat is known to have allergens, if you are trying to eliminate known allergens as part of an elimination diet, or if you want to avoid feeding these common proteins to your pets, you can opt for limited ingredient food.

A limited ingredient food should contain a single protein and a single carbohydrate. If your cat does not show allergic symptoms, it means that they are not allergic to the protein or carb in that food. You can either continue to feed this novel protein, or you can try another and keep trying foods until you discover what your cat is allergic to. Among Merrick’s cat food line are several limited ingredient foods, and most of their recipes contain a single protein source to make the ingredients easily identifiable.

A lot of Merrick’s foods contain fish oil and other omega fatty acid supplements. These supplements provide your cat with omega-3 and omega-6 essential fatty acids. Fish oil can help combat joint pain, thanks to its high EPA and DHA content. It can also help stave off heart disease and kidney disease and improves cognitive function and even coat and skin health.

Unfortunately, at least one Merrick recipe contains carrageenan, which is a deeply controversial ingredient. Following human testing, it was found to contain a known carcinogen that increases the likelihood of a person catching cancer. It also contains a substance that is known to cause gastrointestinal bleeding. Some owners and experts avoid feeding their cats any food that contains carrageenan. Check the ingredients before buying, if you wish to avoid this substance. Limited ingredient lines do not contain carrageenan.

Merrick Pet Foods has undergone several recall notices, but these have all been for dog treats and dog foods. Their cat food has never been recalled. 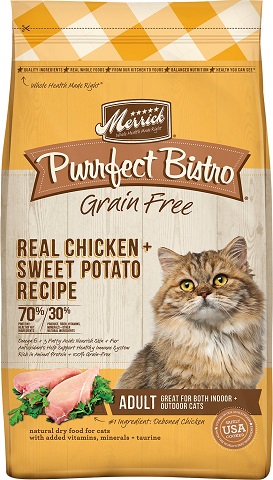 Merrick Purrfect Bistro Grain-Free Dry Cat Food lists salmon and sweet potato as their main ingredients. The food is high in omega fatty acids and contains a mix of antioxidants, vitamins, and essential minerals. Other ingredients at the top of the list are chicken meal, turkey meal, and dried egg product.

The food contains 38% protein and 29% carbs, which means that it is around average for protein, fat, and fiber, but above average for its carbohydrate content. Although this food contains no grain, which would make it suitable for sensitive stomachs and cats with allergies, it does contain deboned salmon and dried egg, both of which are considered allergens and may cause allergic reactions from your cat. The food is quite expensive, but it does not list any filler within the top half a dozen ingredients, which suggests that it is a high-quality food. 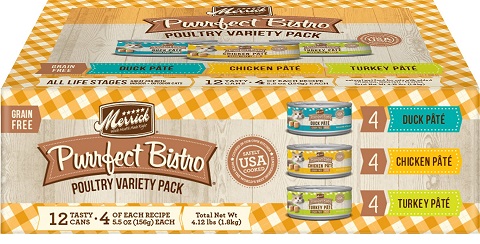 Merrick’s Purrfect Bistro Grain-Free Pate Wet Cat Food is canned wet food. Its primary ingredients are chicken, chicken liver, dried egg product, chicken broth, and natural flavor. Because this is wet food, it has a much higher moisture content than dry food, which can help keep your cat properly hydrated. Among other listed ingredients is salmon oil, which is a beneficial source of omega-3 and offers greater bioavailability than plant-based fatty acid sources.

The pate consistency is popular with cats, easily digestible, and highly palatable. Although this food is grain-free, it does contain egg and chicken, both of which are known allergens. The ingredients also list carrageenan, so you will need to avoid this pate if you are avoiding feeding this potentially controversial ingredient. 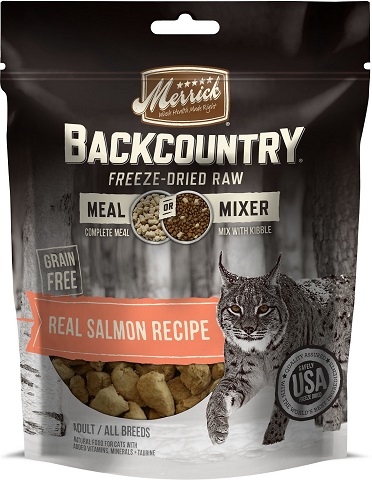 The Merrick Backcountry Freeze Dried Meal Mixer Cat Food is 40% protein, most of which comes from the primary ingredients of salmon, whitefish, and chicken broth. Some protein comes from dried potato and dried peas, which are high in the list of ingredients.

The food can be fed as a standalone complete meal, as a topper for dry food, or as a mixer and combined with dry food. As with all Merrick recipes, this freeze-dried food is made from natural ingredients and does not contain grain or gluten. The protein content is high and it may be best served in addition to lower-protein food depending on your cat’s dietary requirements. Some cats may find the kibble too hard to break down, and it doesn’t soften with the addition of water.

See what others have to say about Merrick’s range of cat foods.

Merrick uses natural ingredients, sources the majority of its food from the USA, and has a great selection of dry and wet foods including limited ingredient food and options that are suitable for cats with sensitive stomachs and food allergies. In most cases, the top five ingredients, which make up the majority of the food, are high quality and meat-based protein sources. The ingredients also contain beneficial and natural sources of omega fatty acids, along with prebiotics and probiotics to encourage good gut health.

Although there are some controversial ingredients in the food, namely inexpensive fillers like pea protein and, less commonly carrageenan, the ingredients list is generally considered to be high quality, making this a beneficial food for your cats.

Looking for other cat food brands reviews? Check out: