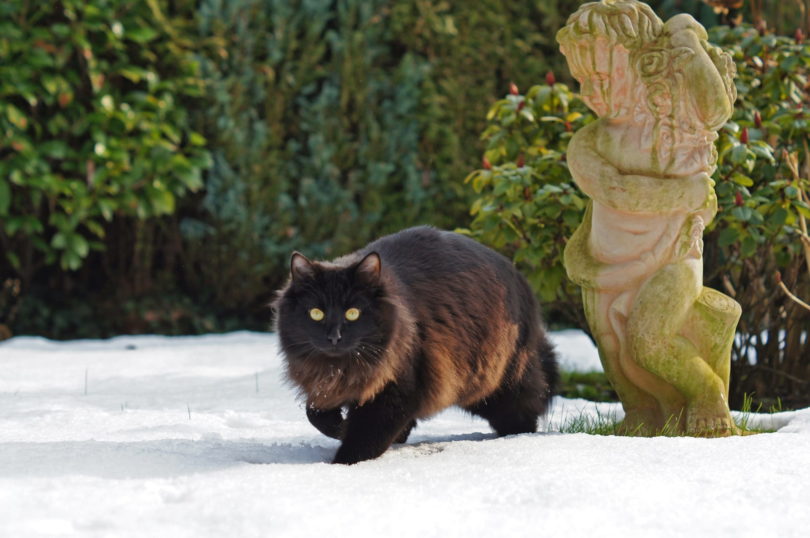 There’s no better time than National Black Cat Appreciation Day to do away with the old superstition that black cats bring bad luck. On August 17th, every year, millions of people around the world celebrate their special day to pamper the black cats in their lives or to go to an adoption center and adopt one of their own.

A History of the Black Cat

Black cats have a lot of lore and superstitions that surround them and they haven’t always been greeted with love and adoration. Black cat symbolism varies from culture to culture and runs the gamut from symbolizing a positive omen to being the harbinger of bad luck. Let’s take a brief dive into some of the most prevalent historical associations.

In Ancient Egypt, black cats were honored thanks to their resemblance to Bastet. Bastet was the goddess of protection and bringer of good health. She was also a protector of women and a goddess of fertility and childbirth.

Irish and Scottish people respected black cats as they believed that crossing paths with one would bring prosperity to your home.

In Japan and much of Asia, black cats symbolize good luck. Some Japanese folklore suggests that if a single woman crosses a black cat, she will find many potential suitors. The Maneki Neko cat figurine with raised paws is a popular figure throughout Japanese culture and is thought to bring good luck and wealth to its owner. While many of these figurines are white, they also come in black.

In Greek Mythology, Hera, the Queen of the Gods, turned Galinthias, her servant, into a black cat in a fit of anger. Galinthias, in cat form, became an assistant to Hecate, the goddess of witchcraft, the moon, and death.

In North America, the Puritans that settled in New England believed that witches possessed the ability to change into black cats. This led to the belief that all black cats weren’t cats at all but were witches. This instilled a fear of black cats so deeply-rooted that it became a common to burn black cats on Shrove Tuesday to protect one’s home from fires.

It wasn’t only in Greek Mythology and North America that black cats became associated with witches. Medieval Europe

In Celtic Mythology, the Cat Sìth was a black cat with a white dot on his chest. It has both positive and negative associations as some folklore believed the cat-sìth was a fairy, and others believed it was a witch.

Some folklore tales say that this creature can claim souls while others believe he will bless the homes of people who leave out cream for him on Samhain.

National Black Cat Appreciation Day is on August 17 every year. It was created in 2011 by Wayne H. Morris who wanted a way to honor his sister and her black cat Sinbad. Both Sinbad and his sister had passed away that year and Morris had hoped that by declaring a national black cat day, it would help dispel some of the myths associated with black cats.

Why Do Black Cats Need an Appreciation Day?

Black cats, on average, are adopted out less often than cats of any other color. Studies from shelters in Colorado suggest that solid black cats take an average of 26.55 days to be adopted compared to cats of other colors being adopted out in 20.64 days.

While six days may not seem like a long time, any extra time spent in a shelter can raise a cat’s risk of contracting various infections. One study suggests that every day an animal spends in a shelter, there’s a 5% increase in the risk of developing an upper respiratory tract infection.

A study from Kentucky showed that black cats are more likely to be killed in shelters than their colored counterparts.

A recent (2019) study from Jones and Hart set out to examine black cat bias and why it occurs. This study had several interesting and key findings:

So, while cats of all colors certainly deserve an appreciation day of their own, it’s clear to us that black cats have a more urgent need for recognition.

How Can I Celebrate This Day?

There are many ways to celebrate National Black Cat Appreciation Day.

First, if you don’t have a cat yet or are considering adopting another cat, you might consider heading to your local shelter and adopting a black cat. Some shelters even have adoption specials on this day to try and encourage people to adopt their black cats.

If you already have a black cat, August 17 is the perfect day to show him off on social media. Post videos and videos of him to your Facebook, TikTok, Twitter, and Instagram account to brag about how awesome he is. Don’t forget to use hashtags on all your posts so other black cat lovers can find your content and engage with it.

Of course, your black cat will deserve a little bit extra spoiling on this day, too. There’s no better time to buy him his favorite treats or get him a new toy.

You can also celebrate this day by donating to your local animal shelters. Every donation, no matter how small, will help animals in need.

Black cats are just as deserving of love and a happy home as cats of any other color. After reading our blog, we hope you see why it’s important to celebrate National Black Cat Appreciation Day every year.

Can Cats Eat Scallops? Is It Healthy for Them?

Cats eating fish and other seafood is a common trope, but you may be wondering if it’s safe for them…
Cat Breeds

3 Types of Wild Cats in Wyoming (With Pictures)

When it comes to national parks, few are as popular as Yellowstone National Park. If you plan a vacation to…
Cat guides

How to Shave a Cat in 8 Easy Steps

As a general rule, cats should not be shaved. In some cases, however, there are exceptions to this. Cats that…