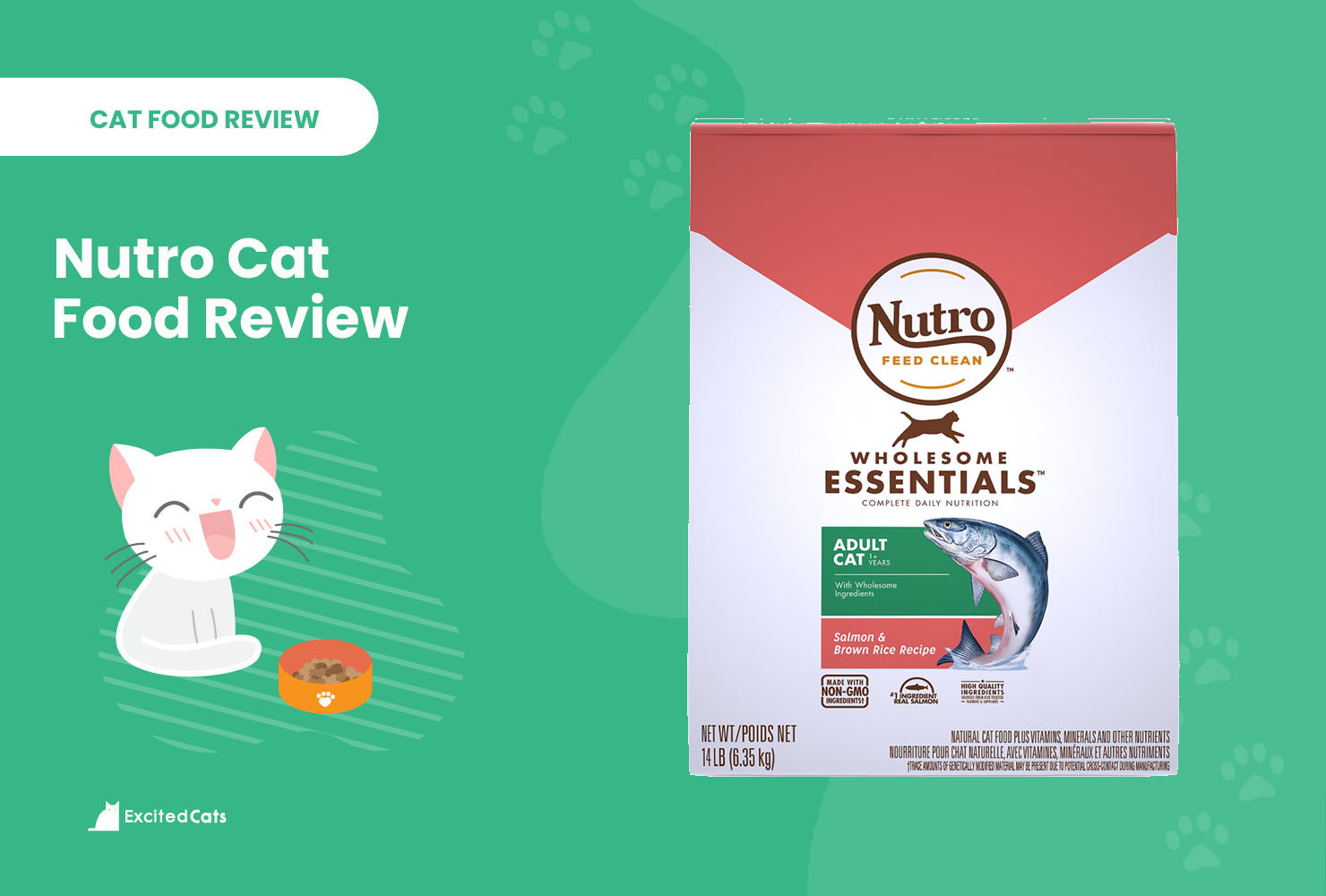 Founded in the 1920s, Nutro is an American pet food manufacturing company and a subsidiary of Mars Inc., which also manufactures other pet food brands including Whiskas, Royal Canin, and Iams Now headquartered in Franklin, Tennessee. The brand was the first to gain the American Feed Industry Association certification.

Their cat food range includes Nutro MAX, Nutro Original, and Perfect Portions, and their wet food ranks as being well above average, although their dry food is not as good. As well as food designed for adult cats, they also have specialist ranges for kittens and senior cats.

Like most good pet food manufacturers, the company does avoid artificial ingredients and meat by-products. It also fortifies its food with extra vitamins and minerals.

Overall, Nutro cat food is good quality food that we would recommend to cat owners, although they do have a questionable history of recalls that are worth noting and have caused us to rate them a little lower.

At a Glance: The Best Nutro Cat Food Recipes:

Who Makes Nutro Cat Food and Where is it Produced?

Nutro Cat Food was first formed in 1926 when American businessman John Saleem bought a British pet food manufacturing company and renamed it Nutro Products. The company has undergone several changes in ownership since then but was bought by Mars in 2007. It has remained under their ownership since and joins a long list of other pet food brands including Whiskas, Royal Canin, Sheba, and Iams.

All Nutro Cat Food is produced in the USA. Their dry food is manufactured in North Carolina and California while their wet food ranges are made in Ohio, Arkansas, and South Dakota.

Which Types of Pets is Nutro Cat Food Best Suited For?

Nutro has a broad range of cat foods. They sell adult foods that are suitable for general adult cats. They also sell grain-free recipes, although these are mostly wet foods. They also have many foods that are geared towards kittens or seniors, as well as those for sensitive stomachs and to assist in controlling hairballs. As such, there is likely a range of Nutro cat food to suit your cat’s stage of life and nutritional requirements.

Discussion of the Primary Ingredients (Good and Bad)

Some of the primary ingredients include:

Nutro cat foods, like most pet foods, contain additional vitamins and minerals. These are included for a variety of reasons and in the case of Nutro, they include chelated minerals. Chelated minerals are bound to protein, which means that they are more efficiently digested by the body. They have greater bioavailability than non chelated minerals.

Nutro food does not contain any GMO, or Genetically Modified Organism, ingredients. GMO foods are considered potentially dangerous and their side effects are not fully understood yet. Some pet foods are known to contain canola oil, which may be made from genetically modified rapeseed oil, although this is not necessarily true. None of these ingredients are present in Nutro pet foods.

The ingredients found in Nutro foods are, generally, good quality and serve a purpose. The foods are primarily meat-based, which is also good, and most of the lines are species-appropriate. However, some of the foods do contain inappropriate fillers, such as alfalfa meal. Alfalfa meal is most commonly found in horse feed, and it is only added to food because it is cheap and readily available. It is a source of protein, but meat-protein is considered much higher quality and more beneficial.

Nutro pet food has been recalled several times, especially in the past 15 years. In 2015, their dog treats were recalled due to mold contamination of their apple chewy sweets. However, it isn’t just their dog foods that have been recalled. The following recalls have been initiated for Nutro cat foods:

In 2007, several Nutro foods were recalled because they used melamine-contaminated ingredients from China. Nutro was one of a large number of suppliers caught up in this particular recall.

In 2009, Nutro cat food was recalled because of inappropriate and incorrect levels of zinc and potassium. Several pet owners had reported their cats and dogs falling ill after eating Nutro pet foods.

In the same year, Mars recalled several of its brands of pet food because of reports that there were small pieces of melted plastic found in the food.

Although Nutro does manufacture a number of recipes, we have taken a closer look at three of their most popular: 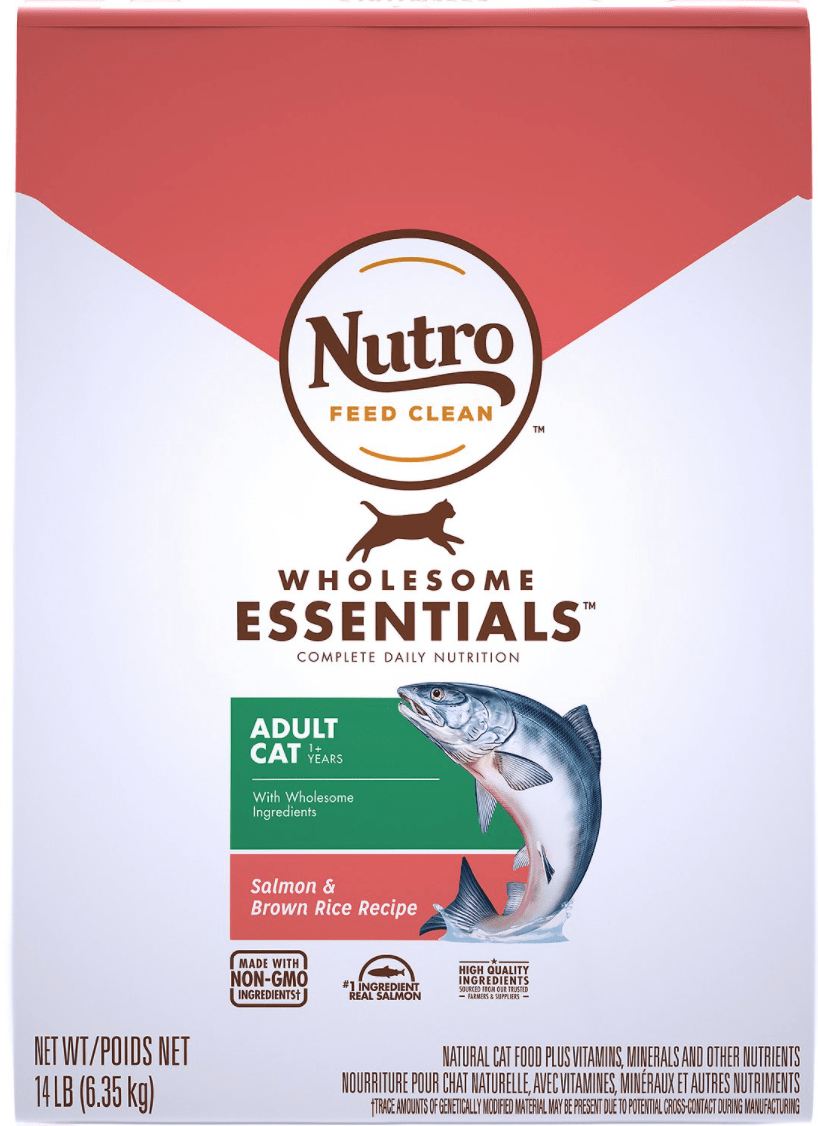 The Wholesome Essentials Adult Salmon and Brown Rice recipe is a dry cat food that lists salmon and chicken meal as its primary ingredients, followed by brewers rice, pea protein, and whole brown rice as its next ingredients.

The Nutro Wholesome Salmon and Brown Rice food boasts 33% protein and it does contain additional, chelated minerals, but it also includes alfalfa meal and dried plain beet pulp which are lower quality ingredients that would ideally be replaced by meat ingredients in a premium food.

The Nutro Perfect Portions Natural Wet Cat food is a wet food designed for adult cats of all ages. The actual ingredients do vary on the flavor you buy, but taking the salmon and tuna recipe as a guide, its primary ingredients are salmon, chicken, chicken liver, pork broth, chicken broth, and tuna.

This means that the vast majority of the 12% protein in these trays is derived from meat, and means that Nutro Perfect Portions are among some of the best wet foods available. With that said, this food does contain some controversial ingredients, including menadione sodium bisulfite complex. Although this is a known source of vitamin K, it is controversial because it has been linked to a number of health complaints including kidney problems. It is potentially harmful to dogs and cats.

The food also contains carrageenan, which is another controversial ingredient. This ingredient is controversial because it is believed to cause inflammation and toxicity in animals. 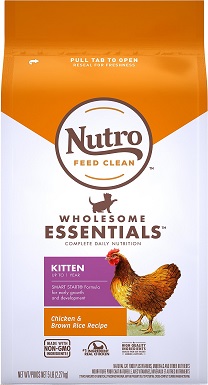 The food has 36% protein and does not contain any GMO ingredients. It is also free from any artificial additives and only uses natural ingredients.

With the primary ingredients being meat-based, the Nutro Kitten Food gets a good majority of its protein and nutrients from healthy sources. However, it does contain a lot of inexpensive and lower quality fillers including alfalfa meal, pea protein, and dried beet. It is considered an average dry food.

While it shouldn’t cause your kitten harm or lead to illness, there are better quality foods out there.

Here is a sample of what others are saying about Nutro’s cat food range:

Nutro, which is part of the Mars parent company, manufactures a wide range of foods. As well as adult dry food, they also supply kitten food and manufacture senior food. You will find Nutro food ranges that are geared towards cats with sensitive stomachs and those that produce a lot of fur balls.

Although the wet food is considered much higher quality than the dry food, Nutro is known for using natural ingredients and they do not use GMO foods. They incorporate vitamins and minerals into their recipes, ensuring that your cat’s food is fortified and healthy.

While their dry food would benefit from having fewer filler ingredients, there isn’t anything likely to cause harm or toxicity to your cat, making their full range a good choice for owners and cats alike.