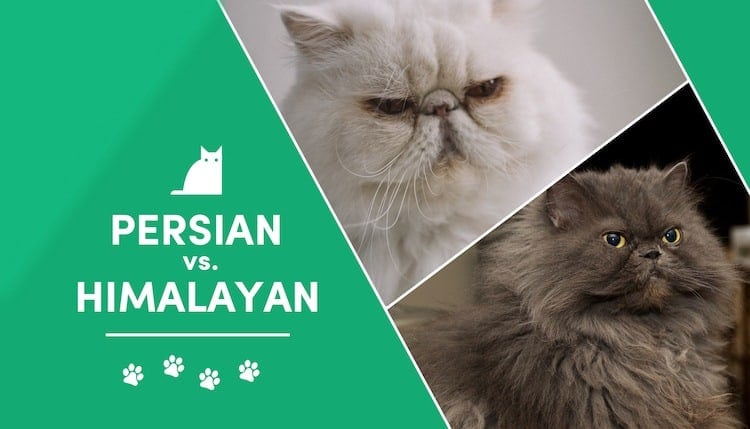 Persian and Himalayan cats have a somewhat similar appearance. This is because they’re quite closely related. In fact, the Himalayan cat was created in the United States in the 1930s by specialized breeding of Persian cats to create a Persian cat with colored points. The Himalayan wasn’t recognized until the 1950s when it became its own breed.

Today, some registries consider Himalayans to be a pointed Persian, part of the Persian class. In Britain, the Himalayan is called the Colorpoint Longhair.

But aside from the colored points, are there any differences between these two breeds? Is one preferable to the other? Let’s take a closer look at each of these specific breeds to see where the differences lie. 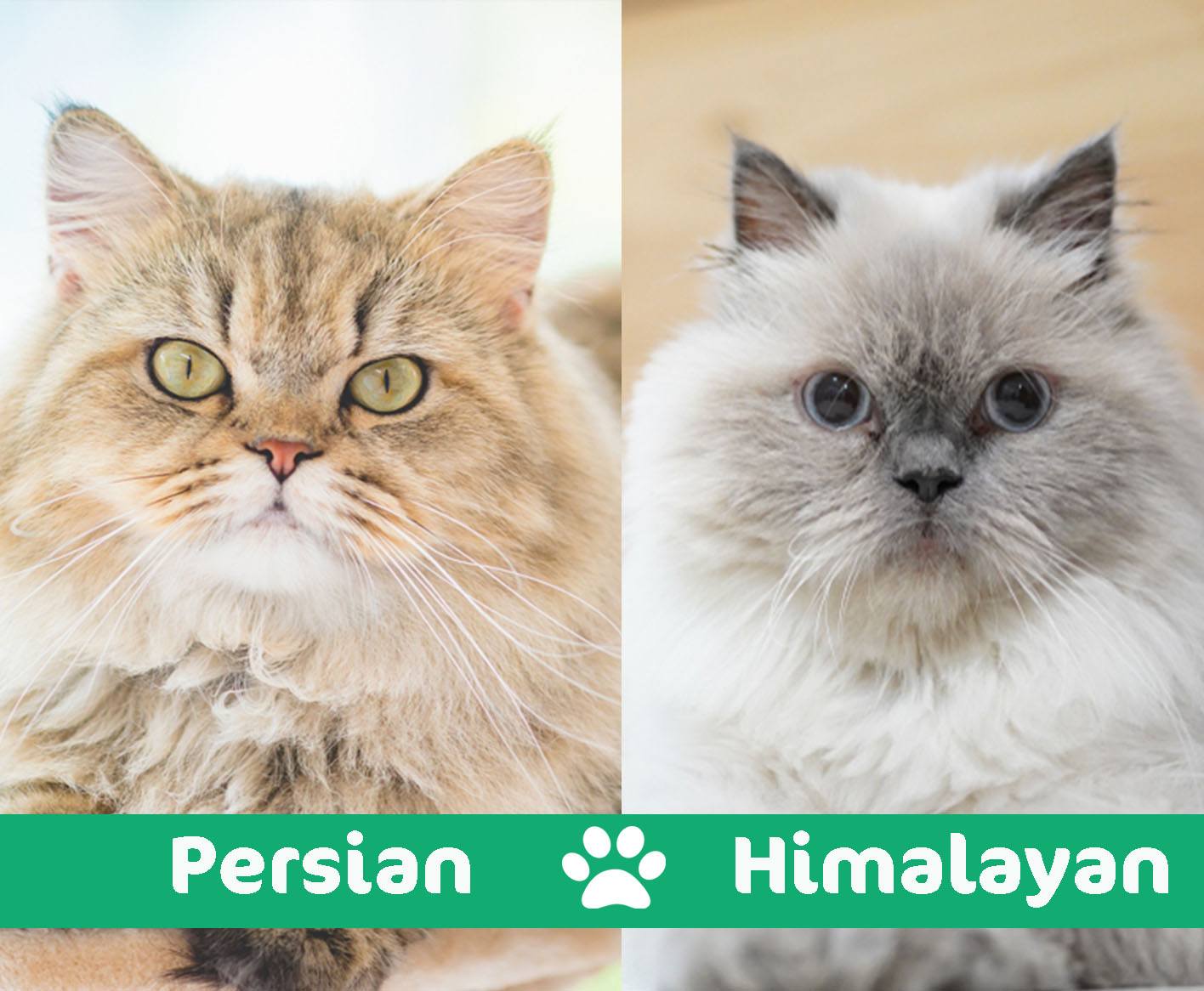 In North America, no pedigreed feline is more popular than the Persian cat, and they’re in the running to be the most popular cat in the world. They’ve been around for a long time, although their origins are still a mystery.

These cats have a large round head with a flat nose and small ears. Their bodies tend to be stout due to their heavy bones. They also have short, stubby legs and a thick, long tail.

Temperament & Intelligence of the Persian Cat

Though they are smart, Persian cats aren’t known to be the geniuses of the cat world. They’re actually noticeably less intelligent than other cat breeds. But it’s their demeanor that makes them so popular.

While most cats are demanding and will let you know when to give them affection, Persian cats are a bit different. They’re not very demanding at all and will allow you to provide affection as you see fit, though they can still get a bit vocal when they feel neglected.

They’re friendly and playful, though not overly energetic. You’ll often find them lounging around, though they’re just as happy to play with a toy and keep themselves entertained.

Persian cats are great for families. They’re not too demanding but they still want lots of attention that can be provided by multiple family members. But their love isn’t given freely. Each family member will need to individually earn the trust, love, and companionship of this breed.

Does This Breed Get Along with Other Pets?🐩

The Persian cat is a friendly feline overall. As such, they do seem to get along well with just about everyone. This includes other pets. Whether it’s dogs or other cats, Persians don’t seem to mind the extra company and companionship.

Overall, Persian cats are rather high maintenance. As mentioned, they won’t demand your attention, though they’ll let you know if they don’t think you’re providing enough of it. Aside from regular love and affection, this breed needs constant grooming to keep their coat from becoming matted and tangled.

Persian cats tend to be pretty low-key, so they don’t need much exercise. They’re not as spunky as other breeds that tend to run around and expend their energy in various ways. Instead, Persian cats need just a moderate amount of playtime, which they’ll likely get on their own if you provide some toys for them.

Though they’re not the smartest of cat breeds, Persian cats are still pretty intelligent pets. They can learn quickly and will figure out the important stuff right away, such as where the litterbox is and how to use it.

You can also train your Persian to easily get used to grooming, after which, they’ll likely enjoy the daily process.

Persians are pretty high maintenance cats when it comes to their coats. They need daily brushing to keep their coats under control. Their hair will tend to mat, tangle, and accumulate dead hairs if not given daily attention. Plus, they’ll end up shedding excessively, which can cause quite a mess in your home. 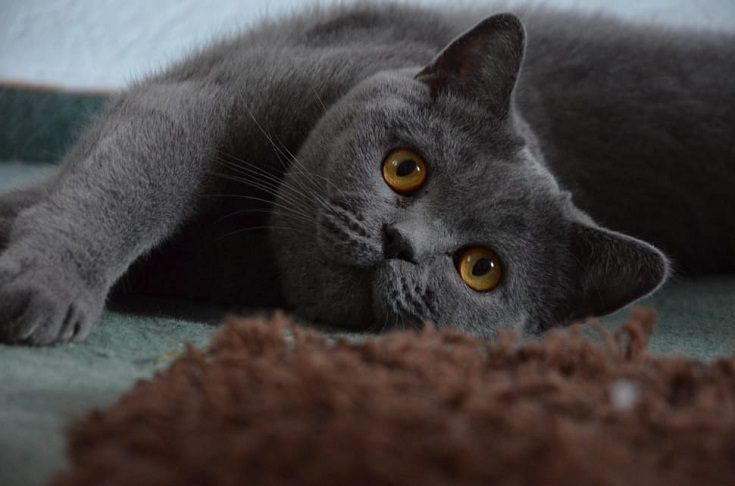 Because Persian cats have been specifically bred to accentuate certain traits, they’ve become susceptible to a range of hereditary health concerns. You’ll want to keep an eye out for these with regular vet visits throughout your cat’s life.

If you purchase your Persian from a reputable breeder, the incidence of developing one of the maladies is much lower. Good breeders do everything possible to weed out these genetic liabilities and will often even offer a health guarantee on your kitten to ensure that it’s as healthy as possible.

The Persian cat is a flat-faced feline breed. All flat-faced cat breeds are sensitive to heat, so they aren’t suitable as outdoor cats. They need the cool air of your home’s air conditioner to keep them comfortable and safe.

When transporting your Persian cat, keep in mind that many airlines won’t transport them in the cargo pay because of the potential for adverse reactions.

Pros and Cons of Owning a Persian Cat

Himalayan cats are Persian cats that were bred in the United States for their colored points. Later, they were recognized as their own breed, though today, they’re being assimilated back into the Persian breed by many cat associations.

These are affectionate cats, but they’re very choosy about who receives that affection. They’re calm cats overall, not hyper and energetic like certain breeds.

Similar to Persians, Himalayan cats have very large bones, which makes them appear much larger than you’d assume by their weight. Because of this, they tend to stay down on the floor, rather than climbing your bookcase for a perching place like many other felines will.

Temperament & Intelligence of the Himalayan Cat

Sweet and loving, the Himalayan cat wants a lot of affection, but not from just anybody. They only bond closely with people they truly trust, so it’s family members and close friends, but almost no one else. They’re not too demanding about their need for attention, but they can still let you know if you’re not providing enough to keep them fulfilled.

This is a relatively calm breed that won’t be running around the house at breakneck speeds. They might play with a toy or chase a pointer laser, but it won’t last too long. Pretty soon, they’ll be back to lounging around on the floor or couch.

Himalayans make excellent family cats. They’re relatively patient for felines, so they do well when playing with or being groomed by children. They don’t want to be dressed up though, so make sure your kid doesn’t force them into anything they don’t like! Still, they will offer love and affection to all members of the family that they grow to trust.

That said, they’re not great for families with several loud kids that are always on full blast. They do better with calm children. The extra noise of loud kids can be too much for this cat that prefers a quiet hideaway.

Does This Breed Get Along with Other Pets?🐩

For the most part, Himalayan cats do well with other pets. But they don’t want to be chased or given any anxiety by any aggressive pets. If your other pets are also relatively calm, then they’ll get along with your Himalayan just fine.

Similar to Persian cats, Himalayans are known to be high maintenance. They need nearly constant grooming. If you skip a day, the coat will start to tangle. Moreover, they need regular bathing, at least every month.

These are also very pretentious cats, so you’ll need to keep their litter box clean. If there’s any waste that can get lodged in their paws or coat, expect that your Himalayan will opt to do its own thing rather than continue to use the dirty litter box.

Because of their calm nature, Himalayan cats require very little exercise. They’ll get their physical activity in through short play sessions throughout the day. Aside from this, you’ll mostly find your Himalayan lounging about.

Himalayan cats are smart enough to easily learn the basics, though they won’t want to go through much more training. You’ll have no trouble teaching your Himalayan to use the litter box, so long as you keep it clean. Aside from this, don’t expect to teach your Himalayan too much, they’re not the smartest cats in the tree.

To keep that long, luxurious coat from looking matted and trashy, you’ll want to spend time grooming your Himalayan every day. You’ll need to brush with a steel brush to remove all the dead hair and keep them looking beautiful. Aside from this, regular bathing is all that’s necessary.

Himalayan cats are prone to quite a few health concerns, most stemming from their pushed-in faces. They can commonly have trouble breathing or have very loud breathing because of constricted nostrils. They’re also susceptible to excessive tearing of the eyes, which can often be a sign of a more serious eye condition, like cherry eye, progressive retinal atrophy, or entropion.

Like other flat-faced cats, Himalayans don’t do well in the heat. They’re very sensitive to the higher temperatures and need to be kept indoors where the air conditioning keeps everything cool.

Pros and Cons of Owning a Himalayan Cat

Both Himalayan and Persian cats are highly popular, though Persians are considered some of the most popular cats in the world. They look and act very similar to each other because they are. The Himalayan is an offshoot of the Persian cat, bred for its colored points.

If you’re looking for a calm cat that wants to stay inside and lounge about but still have some playful fun on occasion, then either of these breeds is a great choice.

Truthfully, the decision will likely come down to a preference of looks. Temperamentally and care-wise, these two breeds are very similar. The biggest differences between them come in appearance. So, look for the cat that makes you fall in love with its looks and you’re sure to be happy with your new companion.