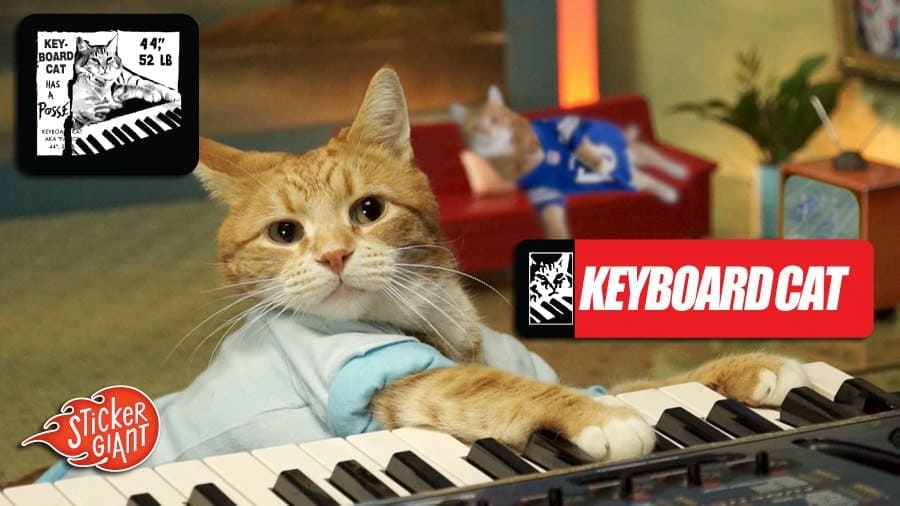 Most of the time, meme culture moves too fast to perceive. If you want to feel old, listen to this: Steamed Hams, the Gru reaction, and “Is this a pigeon?” all blew up in 2018. And don’t even get us started on how long ago Harambe feels.

Yet if there’s one (safe for work) thing on the internet that’s truly evergreen, it’s cat videos. Ancient web civilizations put cat videos on their Geocities and Angelfire pages, and ever since, they’ve been about the one thing we all agree on. Democrat, Republican, loved or hated Star Wars: everyone likes cat antics.

That’s why we’re here, today, talking about a meme that peaked in 2009. Cats are still beloved of the world wide web, and Keyboard Cat is still funny. Read on for a celebration of the internet’s very favorite musically inclined feline.

Who is Keyboard Cat?

Keyboard Cat’s actual identity is Fatso, an orange tabby owned by an artist named Charlie Schmidt. In 1984, Schmidt put a child-size t-shirt on Fatso, who was an extremely good sport about the whole thing (could’ve been the treats Charlie gave him), then filmed himself puppeteering the cat’s paws to bang on an electric keyboard.

Fatso died in 1987, and the VHS tape sat around for the next 20 years. In 2007, when YouTube was still in its Wild West days, Schmidt posted the video to his channel, where nobody watched it.

Around two years later, Keyboard Cat found a new lease on life thanks to Ashton Kutcher, the former That 70s Show star who’s since remade himself as an entrepreneur. On May 5, 2009, Kutcher tweeted: “my favorite is that the cat playing the piano makes all of the pain go away.”

At the time of Kutcher’s tweet, people were already using Schmidt’s Keyboard Cat footage in “fail” videos, but May 2009 marked the moment Fatso began to hit the big time. Not bad for a cat who’d already been dead for over two decades!

I Don’t Get Memes. Can You Explain It?

Sure! It might even still be funny once we’re done.

Keyboard Cat is a modern update of the Vaudeville Hook, a long-running sight gag in which inferior performers are removed from the stage in goofy, highly visible ways. For a more contemporary equivalent, think of the orchestra starting to play and cutting off some star’s tedious Oscars acceptance speech.

The appropriate time to place the Keyboard Cat clip is at the end of a video where you’re enjoying somebody else’s discomfort — hopefully, because they deserve it. Say, a woman falling off a table because she stood on it and started dancing.

When Fatso achieved posthumous fame, Bento took on the role of the new Keyboard Cat. He starred in videos, performed new songs, and became the lynchpin of the Keyboard Cat Store, still run by Schmidt. Cat and owner even appeared together in PSAs for animal shelters.

Many cats have gone viral enough that their owners can give back to the community. According to The Guardian, the owner of Lil Bub — the iconic big-eyed, lolling-tongued kitty — gives $200,000 to animal-related charities every year.

That article also relates how Schmidt and the other owners of viral cats have been able to go into business as professional cat owners. The owner of Grumpy Cat used to work at a Red Lobster; now she lives off merchandise.

Why Did It Go Viral?

Who can say? Trying to predict why anything goes viral is black magic. The internet wants something, and the right picture or video appears to fill that void.

All we can tell you for sure is that while fads come and go, our bond with our cats endures. We see so much of ourselves in these goofy, needy, arrogant, accident-prone animals. When they first moved into our granaries to chase away mice for us, could we have predicted that they’d be the stars of an unheard-of technological network thousands of years later?

Probably. Cats are just made for fame.

Bento passed away in 2018, but there is every indication that Charlie Schmidt will adopt a new cat to carry on the Keyboard Cat legacy. After all, Fatso and Bento both made it to the top on skill alone, putting in hours of hard work at the piano (or so Schmidt would have us believe). Who’s to say a new feline star won’t soon be born behind those electronic keys?

Looking for fun names for your cat besides Fatso & Bento? Check out these posts:

Cats can be both indoor and outdoor animals, but there are quite a few risks to consider if they are…
The category

Of course, accidents happen, so you can’t fault your kitty for the occasional mess.  But you will want to make…
The category

Some cats don’t often need their nails trimmed, but others, especially indoor cats, will need regular trims to keep those…