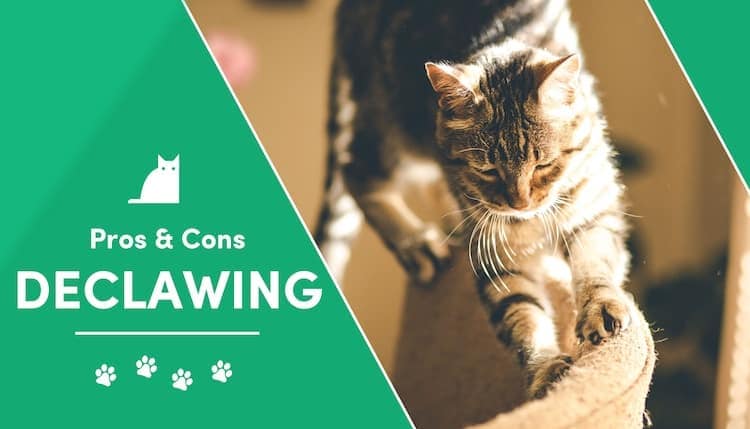 If you’ve ever owned a cat, then you’ve certainly had the thought. Usually, it comes after petting her belly, in a moment you thought you were both enjoying — until she suddenly flips over and digs her claws into your arm before running away.

The thought, of course, is: should I declaw my cat?

This isn’t a decision to be made lightly. While there are obviously some benefits to it, keep in mind that it’s something that can’t be reversed, so you’ll want to be absolutely certain before doing it.

With that in mind, we’ll take a look at some of the biggest reasons why many people declaw their cats — and why many others don’t. Let’s start by going over what declawing a cat actually means.

What Happens When a Cat is Declawed?

Many people are under the impression that declawing a cat is little more than giving them a permanent manicure. In fact, the procedure is far more involved than that.

You don’t just remove the nail when declawing an animal, as there’s also a little piece of bone that has to come out as well. As a result, this is a fairly involved surgery.

Don’t think of it as removing your fingernails. In essence, it’s like chopping off the entire tips of your fingers.

Pro: It Protects You and Your Family.

While you may be willing to tolerate the occasional slashing, you’ll likely find that your tolerance goes way down when it’s your children that could be the victims.

Many people decide to undergo the procedure after seeing their cat draw blood from a toddler or other small child. It’s hard to argue against taking steps to protect your kids, but there might be another way to do it.

Con: You Can Protect Your Kids Through Other Means

Unless you truly have a demon cat, most injuries can be avoided by keeping your pet’s nails closely trimmed.

Also, you should teach your child how to interact with cats from an early age. This could mean showing them how to pet them properly or maybe just teaching them to leave the cat alone.

Pro: It Can Save Some Cats’ Lives.

If a cat has a vicious streak, that could make it more likely to be taken to an animal shelter — and aggressive cats don’t have much hope once they’re in the pound.

If the cat is completely harmless, though, he has a much better chance of finding a forever home.

Con: It Can Also Cost Some Cats Their Lives.

Cats have claws for a reason: they’re a form of self-defense. If you take that away from them, they become much more vulnerable to attack.

This might not matter if you keep your pet inside all the time, but for outside cats, declawing them could be a death sentence. Ironically, taking away their primary weapon may also make them more likely to act out, so you could be swapping a scratch for a bite.

Taking away a cat’s claws limits their ability to defend themselves and may impair their ability to pick things up with their paws. Beyond that, however, they should be able to function normally.

This includes being able to walk, run, and climb, so you may not notice much of a difference in your cat’s ability to move after the procedure heals.

Con: It May Cause Behavior Issues.

Let’s imagine you’re living with some friendly people. Every day they feed you, give you a massage, and clean up after you. Then one day, seemingly for no reason, these people chop off your fingertips. How would you react?

If you think you might get a little ornery, then you’ll understand how your cat feels. Many cats develop behavioral issues after being declawed, including not using the litter box. This may be due to pain in their feet, or it may just be out of spite. Either way, you’ll have a mess to clean up.

Pro: It Can Protect Your Furniture.

Beyond shielding kids from harming, protecting furniture and other valuables is the most common reason why owners have their cats declawed. After all, your kitty can’t sharpen his claws on your new couch if he has nothing to sharpen.

Con: There Are Other Ways to Protect Your Furniture.

Again, you can potentially get the same results without resorting to amputation. Other possibilities include providing plenty of scratching posts, keeping the nails trimmed and dull, or even attaching special covers to them that prevents them from doing damage.

While none of these options are guaranteed to save your new living room set, they’re likely worth a shot before you make an appointment with your surgeon.

Pro: It May Bring You Closer to Your Cat.

If the threat of being sliced to ribbons keeps you from petting your cat as often as you’d like, removing that threat may bring the two of you closer together.

You may find that every member of your family is spending more time and lavishing more attention on the cat after he’s had his razor blades taken away. Will he feel that it’s worth it? That’s not a question we can answer.

An angry cat with claws will still be angry after his claws are chopped off (in fact, there’s a good chance he’ll be even angrier, and understandably so).

Don’t expect a complete 180 in his behavior just because you’ve had him declawed; if he didn’t like being petted before the surgery, there’s no reason to think he’ll tolerate it afterward.

And remember: he still has teeth.

Con: Like Any Medical Procedure, the Possibility for Complications Exists.

While the declawing procedure is generally safe, there are no guarantees. Even if the surgery goes off without a hitch, your cat could develop an infection, which could lead to an abscess or other complications.

Con: It May Cause Health Issues Down the Line.

Declawed cats are more prone to developing arthritis in their old age, as the procedure involves trauma to the tendons.

While arthritis isn’t fun for anyone, it seems to be especially hard on cats, who don’t take kindly to suddenly being unable to run and jump anywhere they please.

Con: Declawing a Cat Is Illegal in Many Places.

Some countries, like the U.K. and Australia, have forbidden the practice entirely, so you may not be able to legally do it where you live.

The fact that entire countries have banned the procedure should also make you think about how humane it really is.

Remember, this is your cat, whom you presumably love. Do you really want to cause him unnecessary pain and suffering if it can be avoided?

We understand that keeping your pet from harm is not always possible, but if you’re the type of person who doesn’t take your animal’s well-being into account before scheduling a major surgery, maybe you should stick to raising houseplants.

As you might have guessed given the fact that our “con” list was much longer than our “pros,” we’re generally against the practice of declawing cats — and so are the Humane Society, American Veterinary Medical Association, and the American Association of Feline Practitioners, so we’re in good company.

That’s not to say that it should never be done, as there can occasionally be sound reasons for performing the procedure. However, it should be looked at as a last resort.

Instead, consider training or other non-surgical alternatives to remedy any problematic behaviors you’re experiencing. This is much healthier long-term for both you and your cat.

Besides, your cat knows where you sleep. Do you really want to make him angry?