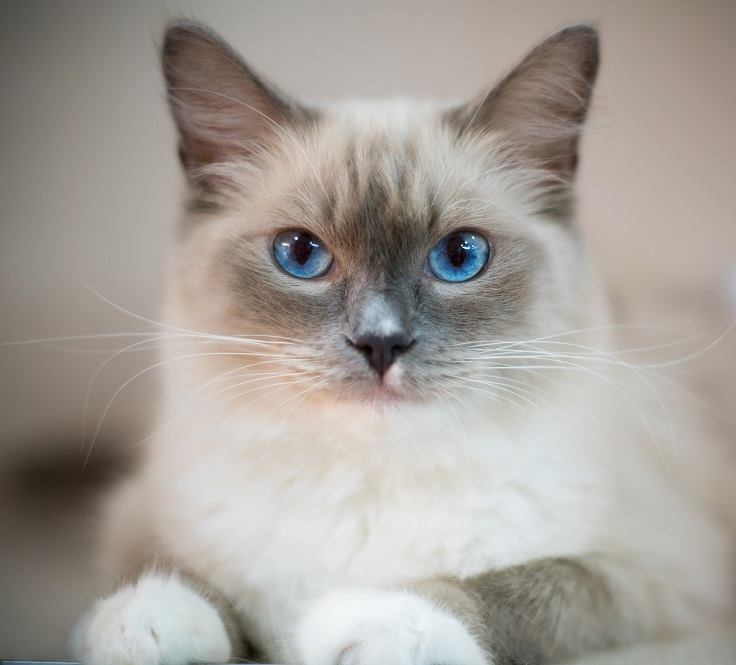 Ragdoll cats have so much going for them, including a relaxed and affectionate nature. Their striking blue eyes and soft, medium-length coat makes them look almost as stunning as their sweet personalities.

Ragdoll cats come in a huge variety of colors and patterns. If you’ve seen Ragdoll kittens advertised with their parents are listed as a Mitted Seal Tortie Point and a Van Lilac Point, you might be wondering what on earth those definitions mean.

All Ragdoll kittens are born completely white and will darken with age. Older cats will continue to darken beyond maturity. Like Siamese cats, Ragdolls have the Himalayan gene, which affects the development of points on their coats.

Cats with this gene will develop the classic pointed coloration because the gene that codes for melanin production within their fur is essentially faulty. It doesn’t work at body temperature, so the fur on the cat’s body will remain a pale color. As the body temperature drops across the ears, face, tail, and legs, we start to see melanin — and therefore, color — produced. This is how a pointed coat occurs!

Ragdolls that live in warmer countries will often be a few shades lighter than if they lived in cooler countries.

All Ragdolls will have blue eyes of varying shades, although a vivid blue is favored by judges.

Now let’s take a look at those eye-catching coat colors.

The 20 Types of Ragdoll Cat Colors

The six main point colors of Ragdolls are seal, chocolate, blue, lilac, red, and cream. These colors can either be solid or shaded with Lynx (Tabby) markings, Tortie, or a combination of both, known as Tortie-Lynx.

For every color, the breed standard states the same definition, that all points should be clearly defined along the face mask, ears, tail, legs, and feet. 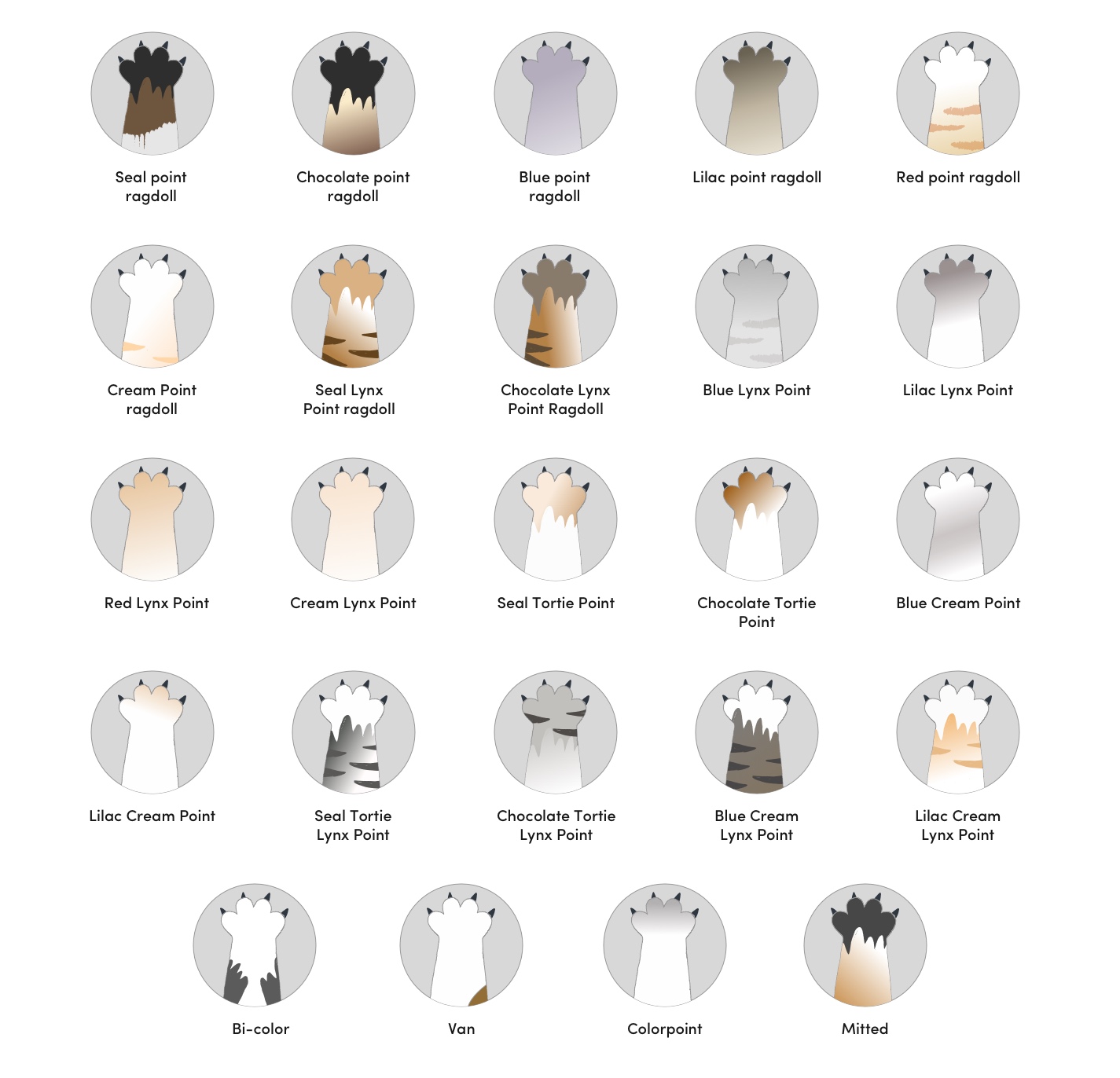 Seal-point Ragdolls have body fur in a warm cream to fawn color, which fades into a lighter shade across their tummies and chests. Their points are a deep and rich chocolate brown, with the nose leather and paw pads in the same shade.

The chocolate point Ragdoll has a pale ivory fur across most of their bodies, which fades toward their chests and stomachs. Their points are warm milk chocolate in color, and their nose and pads are warm pinks with tones of brown.

A blue-pointed Ragdoll has cool shades of white across their bodies, merging into points of deep gray-blue color. Their tummies and chests will be almost pure white. Their paw pads and nose leather are a slate gray.

Lilac-pointed Ragdolls have a pure white body with warm-toned grey points that have a pink tone. Their pads and noses are lavender to pink shades.

Red-pointed Ragdolls are sometimes called flame point. Their bodies are a bright white and can sometimes have pale shading in the same tone as their points, which can range from a deep and rich red to a brighter apricot shade, although darker colors are preferred. Their nose leather and paw pads will range from flesh pink to red tones, depending on the color of their points.

Cream-pointed Ragdolls have body fur in a bright white and points in a subtle cream that can have pink or buff undertones. Their pads and nose leather can be seen in a range of pink tones, depending on the intensity of their cream points.

Now, we’ll take a look at the colors known as Lynx point. These colors are based on the same six shades but are overlaid with distinct Lynx or Tabby barring, ticks, and stripes.

Seal Lynx-point Ragdolls will have rich brown points overlaid with lighter Lynx stripes or bars. Their bodies may also have paler brown stripes and ticks over a cream or fawn fur.

Blue Lynx-point Ragdolls will have most of their fur in white, with undertones of blue. Their points are a deep slate gray with paler bars. Their white bodies can have stripes or ticks in a pale blue-gray.

The Lilac Lynx-point cat has a pure white body with frosty gray points. Their points have paler barring with a pink undertone. They may have body shading of either bars, ticks, or both.

A Red Lynx-point Ragdoll has white bodies contrasting strongly with their points, which can be bright to apricot red. These points are overlaid with paler stripes that can extend onto their bodies. Ticking across the white fur is also sometimes seen, in a paler tone than their points.

The Cream Lynx-pointed Ragdoll will have a bright white body with points in slightly darker yet still subtle shades of cream or buff. These points have paler stripes that merge into the main coat color.

Next up, the Tortie Points! These Ragdoll cats have distinct points in either seal or chocolate. The points are blended with Tortie markings in either red or a combination of red and cream.

Ragdolls with the Seal Tortie point coloring will have cream to fawn bodies. Their seal brown points will be mottled with red or red and cream together. Their nose leather and pads will be seal brown or mottled.

A post shared by Lulu the Himilayan Persian (@luluthechocolatehimi)

Chocolate Tortie point Ragdolls have ivory bodies that can develop mottling as the cat gets older. Their points are a milk-chocolate shade overlaid with either red or red and cream.

Ragdolls with cream points have mottled areas like Tortie points, but this time, these patches are only seen in cream and never combined with red.

These Ragdoll cats have cold white bodies with deep slate gray points that are mottled with cream. Their bodies may also become mottled as the cat matures.

The lilac cream-point Ragdoll will have pure white bodies with gray points in a cold tone. Their points are a frosty gray with pink tones. This is overlaid with cream mottled patches.

Now the Tortie Lynx points! These blend plenty of different colors into one beautiful coat color, combining the best of Tortie and Lynx patterns in one. If you’re trying to figure out what color your Ragdoll falls into, Tortie Lynx points look more like Lynx-pointed Ragdolls than Tortie-point Ragdolls.

These Ragdoll cats have fawn to pale cream bodies that can have stripes and ticks in the pale colors of their points. Their points themselves have a dark brown undertone with both bars and mottling in red or red and cream overlaying this base color. Their nose leather and paw pads can be a range of colors, from seal brown to pink.

Chocolate Tortie Lynx-pointed Ragdolls have ivory bodies with milk chocolate-colored points. These points have paler barring and an overlay of mottling in red or both red and cream. Their nose leather and paw pads can be seen in a wide range of colors, including cinnamon, pink, flesh-colored, or mottled.

The blue cream Lynx-pointed Ragdoll will have platinum to blue-white fur across their bodies with gray-blue points. These points are overlaid with both barring and cream mottling. Their nose leather and paw pads can be a range of colors, including slate, mottled, or pink.

The lilac cream Lynx Point color is a pure white body combined with gray points that have a pink undertone. These points have barring covered by cream mottles. Their bodies may have pale bars or ticking. Nose leather and paw pads will be lavender-pink, coral, or flesh-colored, with some mottling allowed.

There are many different colors that a Ragdoll can have, so let’s take a look at the patterns they can come in as well.

Each of the four patterns can be seen on any of the coat colors listed above.

A bi-color Ragdoll cat will have darker points on the ears and top of the head, bisected by a bright white blaze. The points extend across their back (also referred to as a “saddle”) and tail. The white facial blaze should resemble an upside-down “V,” extending to the edges of their eyes. Their nose leather should be pink, and while pink paw pads are preferred for judging classes, though you may also see a mixture of colors on their pads as well. Their chin, chest, and all along the underside of their tummy should be a snowy white.

Ragdoll cats with the Van pattern will only have darker points across their ears, mask, and tail. This color should be well defined from the surrounding white fur, although minor spotting patterns are allowed all across the coat of a cat with this pattern. They should have pink noses and pads.

The colorpoint pattern is the classic pointed pattern, where the ears, face, tail, and feet are all a clearly defined darker color. It’s common to see cats with a paler chest, chin, and bib than the points, but this should still be different from the paler remainder of their coat. The nose and paw pads of a colorpoint Ragdoll should be the same color as their points.

The mitted Ragdoll pattern is similar to the colorpoint pattern, except that their paws will be overlaid with bright white mittens. The mittens on their back paws can go up and around their hocks but not over their thighs. Front paws should have evenly matched small mittens extending to the wrist. The chin of a mitted Ragdoll should be white, with this joining to a white stripe across their bellies. The face of a mitted Ragdoll can have a white marking shaped like a diamond, star, hourglass, or line. This can be made up of either one line or a broken line but should be central and symmetrical. A mitted cat’s nose leather and paw pads should match the color of their points, although the pads may have a small number of darker spots.

So Many Colors To Choose From

You might see Ragdolls advertised in other colors and patterns, including the mink bloodline offered by some breeders.

The colors and patterns we’ve listed are all accepted by the official Ragdoll Breed Standard of the Cat Fanciers Association.

Maybe you’ve found your dream combination of Ragdoll color and pattern in our list, or perhaps you’ve successfully identified the coloring of your cat! We’d love to know more in the comments below.

The world of memes is a strange place, full of fundraising politicians, successful babies, and distracted boyfriends. But is there…
The category

You’ll notice the Egyptian Mau right away because of their stunning silvery coats and gorgeous eyes. You might wonder just…
The category

Can Cats Eat Garlic? What You Need to Know!

Garlic has so many uses in recipes, holistic medicine, and protects you from vampires lurking around—how could you ask for…