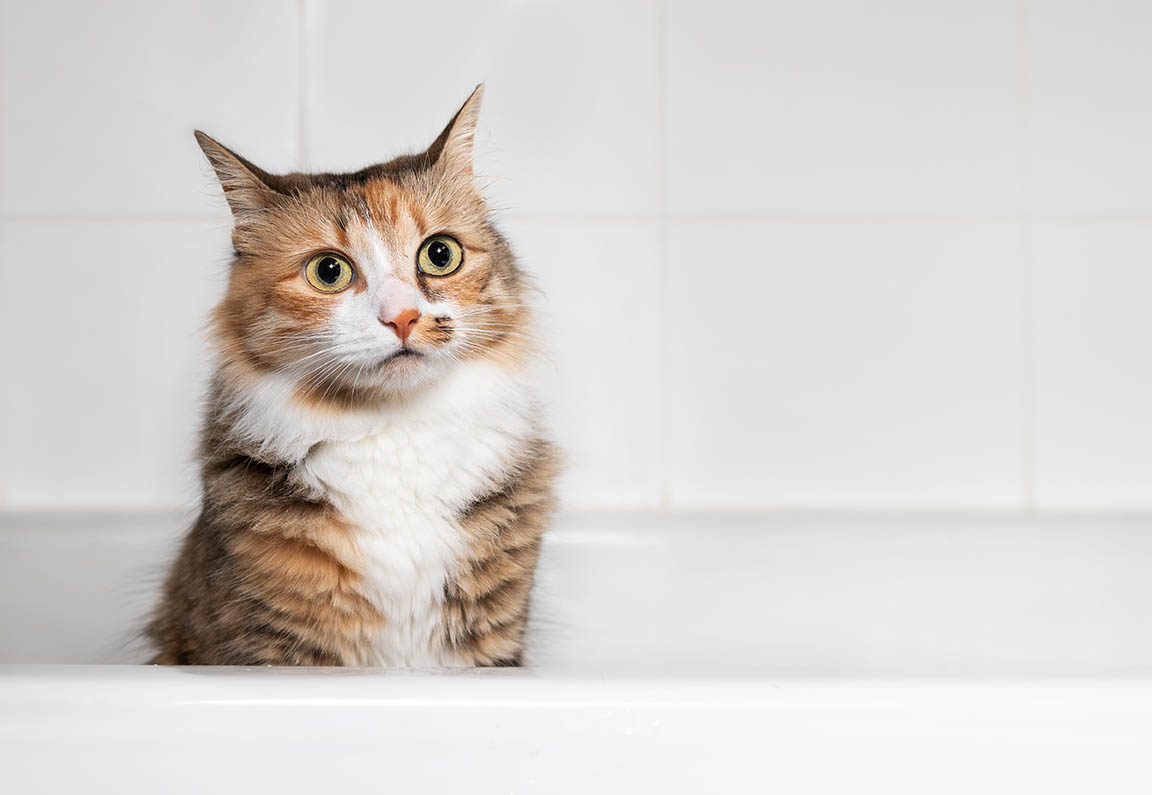 If you are a cat owner, you’ll know how frustrating it can be when your cat poops or urinates anywhere in your home other than their litter box — it’s messy, smelly, and an inconvenience to clean up! One popular place that cats seem to prefer over their litterbox is the bathtub, the very place that you want to be as clean as possible!

There are usually a few simple reasons that your feline has abandoned their litterbox in favor of the tub, sink, or shower. This issue is a fairly common behavior in cats and is mostly due to behavioral problems that are easy to address, but it can sometimes be the symptom of a more serious underlying issue.

In this article, we look at six common reasons that your cat may be pooping in the tub and the steps you can take to fix it. Let’s get started!

Having behavioral issues is the most common reason for your cat pooping in the tub. It could be due to drastic household changes that have caused your cat stress or improper litter box training. This is frequently a problem with kittens that are afraid of or haven’t been taught to use a litter box or with an adopted adult cat that never learned proper litterbox etiquette.

This is both the most common issue that causes cats to do their business somewhere other than their litterbox and the easiest to fix. First, rule out any stress that may have caused your cat to stop using the box, like a change of placement or lack of privacy, and make sure all is in order with their litterbox. Using a litterbox is instinctual for most cats, so making sure the box is clean and located in a suitable, private location should entice them to use it.

Your cat may be suffering from an underlying health issue such as diarrhea, and they may not be able to access their litter box in time. In these situations, the behavior is usually temporary and will typically stop once your cat is feeling healthy and happy again. Although it may seem counter-intuitive, constipation could also be the cause. Constipation can be uncomfortable at best and painful at worst for your kitty, and they may associate this pain and discomfort with their litter box. Once they finally feel the need to do their business, they may choose a private place like the tub to avoid their litterbox.

If you notice that your cat’s pop is runny, they may have diarrhea. This can have several different causes, including a change of diet or too many unhealthy treats. If their food is unchanged and in order, you may need to take them to your vet for a check-up.

If something close to your cat’s litterbox has frightened them or stressed them out, they may associate this stress and fear with their litterbox and choose to poop somewhere else. Cats can also easily get stressed by household changes, like new pets in the home or moving to a new home, and this stress may also cause them to stop using their litterbox.

Try moving their litterbox to a different spot in the house, one that is quiet, calm, and private, where they won’t be bothered. If there have been any drastic household changes that are causing your cat stress, keep them away from your cat. For example, keep any new pets away from the litterbox location or give your cat their own space for a few days if you’ve moved to a new home. The behavior should rectify itself once your cat has stopped feeling stressed, anxious, or scared.

There may be an accident or a stressful event that has caused your feline to be averse to their litterbox, resulting in them using the tub as an alternative! Also, their box may be too small or too difficult to access, or maybe you’ve purchased a new litterbox that they are afraid of — a common occurrence with automated litterboxes.

It’s a good idea to always have an extra litter box to avoid your cat becoming averse to one. The common rule of thumb is to have a litterbox for each cat you own, plus another one. This way, if you do decide to change their litterbox to a new type or something has caused them to be afraid of one litterbox, they always have another option rather than the tub.

Cats are notoriously fussy about everything from food to bedding and litter. If they do not enjoy the litter in their litterbox, they may simply decide to do their business elsewhere. If you’ve made any recent changes to their litter, like buying scented litter or switching the brand, this may be what’s causing the issue. There are a ton of different types of cat litter on the market, and your cat may have their personal favorite.

Try switching back to the old litter, or take on the task of getting your cat used to the new litter. If they are similar, try mixing the two and slowly phasing the old one out.

Your feline may be pooping in the tub due to some kind of cognitive dysfunction. Older cats in particular may develop cognitive issues similar to dementia in humans, which can lead to disorientation and pooping in places other than their litterbox. They may even forget where their litterbox is or leave doing their business until the last minute, resulting in poop in the tub! Old age may also cause anxiety, behavioral issues, and physical issues that may lead to the behavior.

While this is just the natural progression of getting older, there are medications that can help. You’ll need to speak to your vet about appropriate treatments.

There are many possible reasons that your cat may be pooping in the tub, most of which are fairly easy to solve. The main cause is likely some kind of anxiety or aversion to their litter or litterbox — either something has frightened them, or they simply don’t like the style of litterbox or variety of litter. This is simple to solve. If none of these solutions work, though, there may be something more serious at hand, and you’ll need to take your cat for a checkup with the vet.

Can Cats Eat Cashews? What You Need to Know!

Cashews are small and delicious, the perfect little snack. Humans love them and munch on them all the time. They…
The category

Why Do Cats Bring You Dead Animals? 3 Reasons for This Behavior

Over 10,000 years ago, cats were domesticated to be loving, fuzzy companions. To this day, cats are easily one of…
The category

European Shorthair vs. American Shorthair: What’s the Difference? (With Pictures)