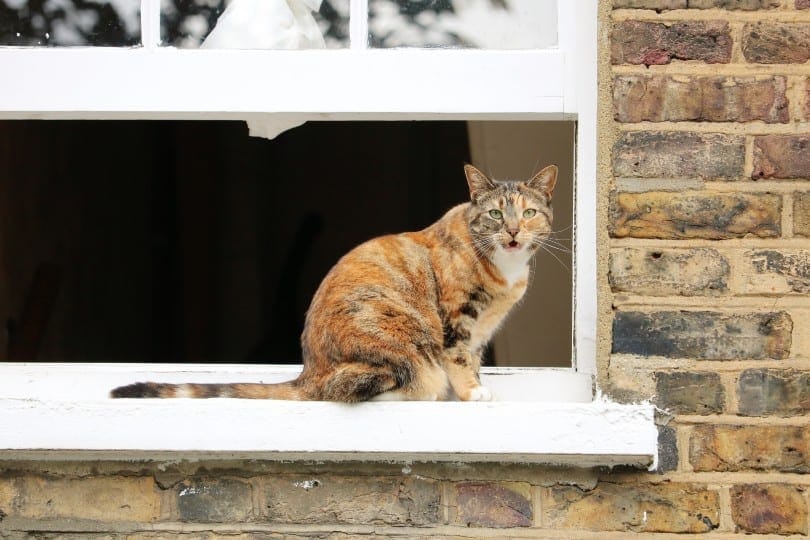 Cats are known for meowing and hissing, but they can also chirp. This is a communication noise that most people are not aware of unless they have experience as cat parents. Chirping, or chirruping, is a normal noise for cats to make, so no alarm is necessary the first time you hear it. A cat chirping sounds like a bird chirping, but it is usually rhythmic in nature. Some people think that a cat chirp sounds like a goat bleep, but much higher pitched. So, why do cats chirp? Here are five reasons for this interesting behavior.

1. It Can Be a Form of Salutation

2. It Can Be Due to Excitement

Another reason a cat might chirp is due to excitement. Chasing a plush toy or ball, playing with kids, and even watching other cats play can make a cat want to show their excitement by chirping. Waiting patiently for a treat can excite a cat enough to let out a chirp or two as well. You never know when a cat will surprise you with an exciting chirp.

3. It Can Be Because of Prey Drive

A cat’s prey drive can get them into the mood to chirp. In fact, being in the hunting mood is the biggest reason for a cat to chirp. Many cats will chirp at birds that they spy through a window in their home, making it seem like they are mimicking the bird. However, they are not mimicking, but instead, they are plotting a path to hunt the bird down. Some cats also chirp at their toys when using the toys as prey.

Cats tend to look happy and relaxed when chirping due to excitement or when saying a hello. But cats that chirp due to their prey drive are erect, alert, and ready to pounce.

Ways to Get Your Cat to Chirp

If you want to hear your cat chirp, you can try teasing them with a feather on a stick, acting as if the feather is prey. Alternatively, you can try turning an electronic toy rat or bird on and putting it on the floor in the middle of the room. Try using treats to entice your cat to chirp when you get home after being gone for a few hours. Your best bet is to just keep an ear out so you can catch your cat chirping naturally.

Now that you know why cats chirp and you have an idea of what cat chirping sounds like, you will be able to recognize this specific type of communication more easily when it occurs. Not all cats chirp, so you may not hear your cat make the noise. However, just because a cat has never chirped before does not mean that it never will. Be patient — it could happen at any time!

Are Orchids Toxic to Cats? What You Need to Know

Some houseplants can be poisonous to cats. If you want to have a house full of greenery but also have…
The category

Ragdoll vs Siamese Cat: What’s the Difference? (With Pictures)

Ragdoll and Siamese cats can be easily confused because of their similar colors and coats. Yet aside from their aesthetic…
The category

Why Do Cats Like Sitting in a “Bread Loaf” Position?

The “bread loaf” position has become quite popular on social media. If you own a cat, you’ve likely seen your…