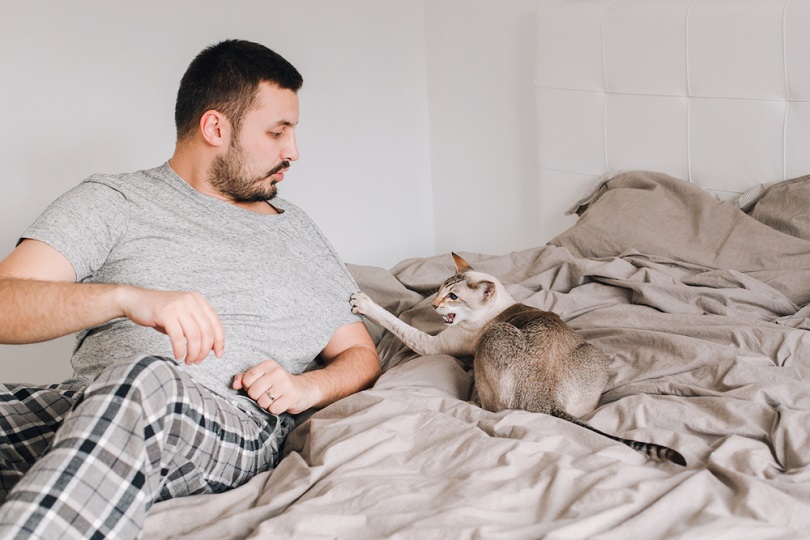 Your normally happy cat is staring intently outside at something, tail completely straight and her ears back. You wonder what is bothering her, so you walk over to her and suddenly she lashes out at you! Even worse is when you’re both happily enjoying a petting session when, seemingly out of nowhere, she bites your hand. Ouch!

Cat bites and scratches not only hurt but can become serious, as their claws and teeth carry bacteria that could make a cat-induced wound much worse than any normal injury.

Some cats are born aggressive, but some cats with normal day-to-day behavior attack suddenly without much warning. If your own cat has randomly attacked you before, read on to find out why and how to solve the problem.

Cats that are exposed to new people, animals or places can display fear aggression. Fear aggression also comes out when there’s an unpleasant experience underway, like getting ready for a trip to the vet or a loud noise your cat doesn’t like.

Since cats can’t talk to us, sometimes they attack you when they are experiencing pain for some medical reason, like arthritis. To avoid any touch or movement that might increase their pain, they may hiss, scratch, or bite you.

Each cat creates and protects its own stomping grounds. If a new cat, other animal, and sometimes new person is introduced to that sacred ground, things can get ugly. Sometimes this even happens to previously ok’d individuals, but maybe they have been gone for a long time. Territorial cats will swat, chase, or attack their intruder.

Sometimes a cat wants to run the house and wants everyone to know who’s boss. Cats displaying this behavior will block doorways, bat at other cats who walk by, or bite you when you give another pet attention.

Cats sometimes love being stroked and scratched, but some cats don’t understand a good way to tell you to stop. This comes out in seemingly random attacks directed at you while you think they are enjoying your attention. Nobody knows exactly why this happens, but it could be because of overstimulation or a control move. Watch for her pupils to become dilated, her ears to turn backward, and her tail to whip about, then you know she’s about to show aggression.

Occasionally a cat will attack you or another pet when it is stimulated by something else. This can happen when your cat sees another stray cat outside or has a bad interaction with another cat.

How to Deal with Cat Aggression

We’ve outlined what kinds of behavior aggressive cats display and how to address each one. Now let’s talk about things you can do to further prevent all kinds of cat attacks.

Half the battle is just knowing the signs your cat displays when he is about to show aggressive behavior. They do this with their face and through bodily signs.

A cat that is about to attack will have dilated (bigger than usual) pupils, have his ears back, and his whiskers out to the side. For a fearful aggressive cat, the ears and whiskers will be flat against their heads.

Signs of aggression shown in a cat’s body include standing with an arched back, hairs on haunches standing on end, an erect tail, and ears flattened to the head. Bodily fear aggression looks like a cat crouching low, ears to the sides of their head, with the cat’s tail under them. Sometimes they will hiss and bare their teeth, too.

When you see these aggression signs, it’s a bad time to pet and console your cat, even if he is scared. This will only encourage him to continue the behavior. You also don’t want to show fearfulness or retreat from your cat if that’s what he wants you to do.

The best thing to do is to ignore his bad behavior and reward when he’s displaying appropriate behavior.

Never get in the way

If two cats are fighting, never put any body part between or get in the way of a fight, as you could get injured. It’s best to use something like a piece of cardboard or a baby gate to separate two fighting cats

Always talk to your vet when your cat has an aggression issue. A vet can maybe help prescribe medication and can recommend you to a behaviorist if necessary.

Cats, like all animals, usually have a reason for doing what they do, whether we know that reason or not. Don’t assume a cat is being bad if they are attacking you. It could be difficult not to cry out or retaliate if they abuse you. Try to see the reason behind the behavior, then you can more quickly ease your and your cat’s woes.

As much as we love cats, it doesn’t mean we always want them rooting around. After all, a cat can…
The category

Of course, accidents happen, so you can’t fault your kitty for the occasional mess.  But you will want to make…
The category

Cat Love Bites: What Do They Mean? Why Do Cats Do It?

We’ve all been there: Giving our beautiful cat a tummy tickle and admiring just how gorgeous they are when all…