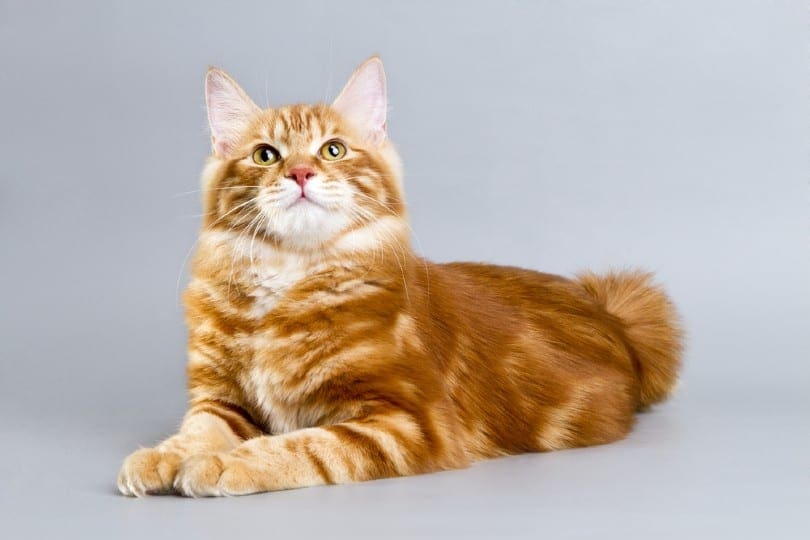 Plenty of us adore the gorgeous markings and fiery color of a red tabby cat, so whether you already own a red tabby cat or are planning to choose a sweet new kitten, we’ve collected our favorite facts about the beautiful red tabby, from exactly how they get their coloring to famous owners and the fact that these cats seem to be the most talkative of them all!

Red tabby cats can be found in all sorts of different cat breeds. The tabby color is a coat pattern rather than a specific breed and can also be seen in other colors, including grey, brown, caramel, and silver. Cats with red tabby coats can be found in breeds such as Maine Coons, Persians, British Shorthairs, Abyssinians, and more!

You might call your cat a red tabby, but they can also be called orange, ginger, and marmalade! They all mean the same thing, that your cat has a beautiful bright red coat with darker tabby stripes.

3. Red tabbies all have a distinctive pigment in their fur

Perhaps your red tabby cat is a bright and fiery color, but you may have seen other red tabbies with a softer glow. Each red tabby may have their individual shades, but they all have a pigment known as pheomelanin in their fur. This pigment also creates red hair in us humans.

4. Red tabbies can have patches of white fur

Some red tabbies will be patched tabbies, where their tabby coloration is interspersed with patches of white. They may have a white chest, stomach, paws, legs, or even a white tail tip.

These are adorable additions to your gorgeous red tabby! Many red tabbies develop freckles on their noses and lips. These usually start to develop when a cat is around 1 year old, but they won’t be seen in all red tabbies.

Yes, red tabbies do look like gorgeous little domestic tigers, and their coat pattern even comes from their wild cousins! The tabby pattern occurs naturally and can be found in many different wild cats, including the Asiatic Wildcat, European Wildcat, and African Wildcat.

Any color of tabby cat, including red tabbies, can have one of five different patterns. Classic tabbies have concentric circles on their sides and a darker stripe down their backs. Spotted tabbies have oval or rosette markings over their sides instead of the classic stripes. Ticked tabbies — which are only seen in some breeds, like the Abyssinian — have tabby markings on their faces, and the rest of their body has lightly ticked fur. Patched tabbies have white patches across different sections of their bodies. Lastly, mackerel tabbies have tiger stripes.

8. The agouti gene is responsible for the tabby pattern

Coat color genetics can be pretty complex, but we do know that every red tabby has a gene known as “agouti.” This gene is dominant, meaning if a cat inherits it from their parents, they will end up being tabby colored. The agouti gene causes individual hairs to be striped with alternating sections of dark and light color, and it’s this that creates those stunning tabby patterns.

9. Red tabbies may be the most vocal cats

While there haven’t been any scientific studies to prove the hunch of many cat owners, red tabbies do seem to be more vocal than any other color of cat. The National Geographic reports that orange or red tabby cats frequently seem to be louder and more outgoing than some other cats. If you’ve got a red tabby, maybe you’ll agree with this statement or decide that your cat doesn’t follow this particular trend.

10. The name “tabby” is inspired by a type of striped silk

It’s thought that the tabby name comes from an ancient region of Baghdad called “Attabiyah.” This area was famous for its high-quality striped silk. By the 14th century, the word had been shortened to “Atabsis,” which was the root for the French word “taffeta,” which is a striped silk. By the 1960s, the phrase “tabby cat” was being used to describe our cute stripy cat friends, which was then shortened to simply tabby.

11. Their eye color can vary

While all cats, including red tabbies, will be born with blue eyes, the color of a red tabby’s eyes will start to change as they grow older. Red tabbies will usually mature to have green, bronze, copper, or golden-colored eyes.

Most red tabbies will be male, with only 1/5 of red tabbies being female. This is because the X chromosome is responsible for that red tabby coloration. Female cats each have two X chromosomes, so they need to inherit the red gene from both their parents in order to have a red tabby coat color. Male cats have XY chromosomes, so they only need to have the ginger gene passed on via the X chromosome from their mother cat. That means there’s a higher chance of male cats being ginger.

13. There are many famous red tabby cats

Many cats depicted in TV, film, and literature are classic red tabby cats. This includes Garfield, Puss in Boots, and Dick Whittington’s cat! The creator of Garfield, Jim Davis, said of his decision to create Garfield as a red tabby: “In my head, the sky is blue, the grass is green, and cats are orange.”

While many cat colors, including black, blue, and white, come in solid coat colors, you’ll never see a solid-colored red cat. They will always have tabby markings on their coat. So, while a tabby won’t always be red, a red cat will always be a tabby cat!

15. All red tabbies have distinctive markings on their foreheads

Each and every red tabby cat will have an “M” on their foreheads, and there are various legends to explain how that came to be. One story tells how the prophet Muhammad placed his hand on the forehead of a cat, and the marking was left as a reminder. Another says that a tabby cat climbed into the crib of baby Jesus and stopped him crying. When the Virgin Mary placed her hand upon the cat in gratitude, a marking was left behind. Lastly, another legend says that tabby cats got this marking while they were frowning at a mouse hole, waiting for that elusive mouse to appear!

Why Do Cats Meow Back at You? 5 Reasons for This Behavior

If you have a cat, you might have noticed that they sometimes meow back at you when you talk. Some…
The category

Our beloved feline friends absolutely love to do things that we really don’t want them to do. Sometimes it seems…