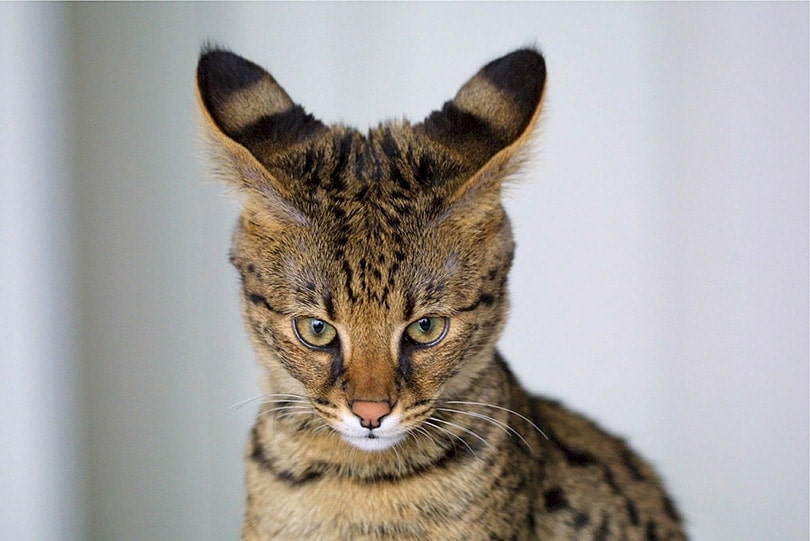 There are only four official colors and one pattern accepted by the International Cat Association’s (TICA) breed standard. There are many other colors and two patterns that can sometimes be seen in Savannah cats; these just aren’t destined for the show ring.

First, let’s have a look at the four colors accepted by TICA’s breed standard, and then we’ll move on to the other colors and patterns seen in Savannah cats. 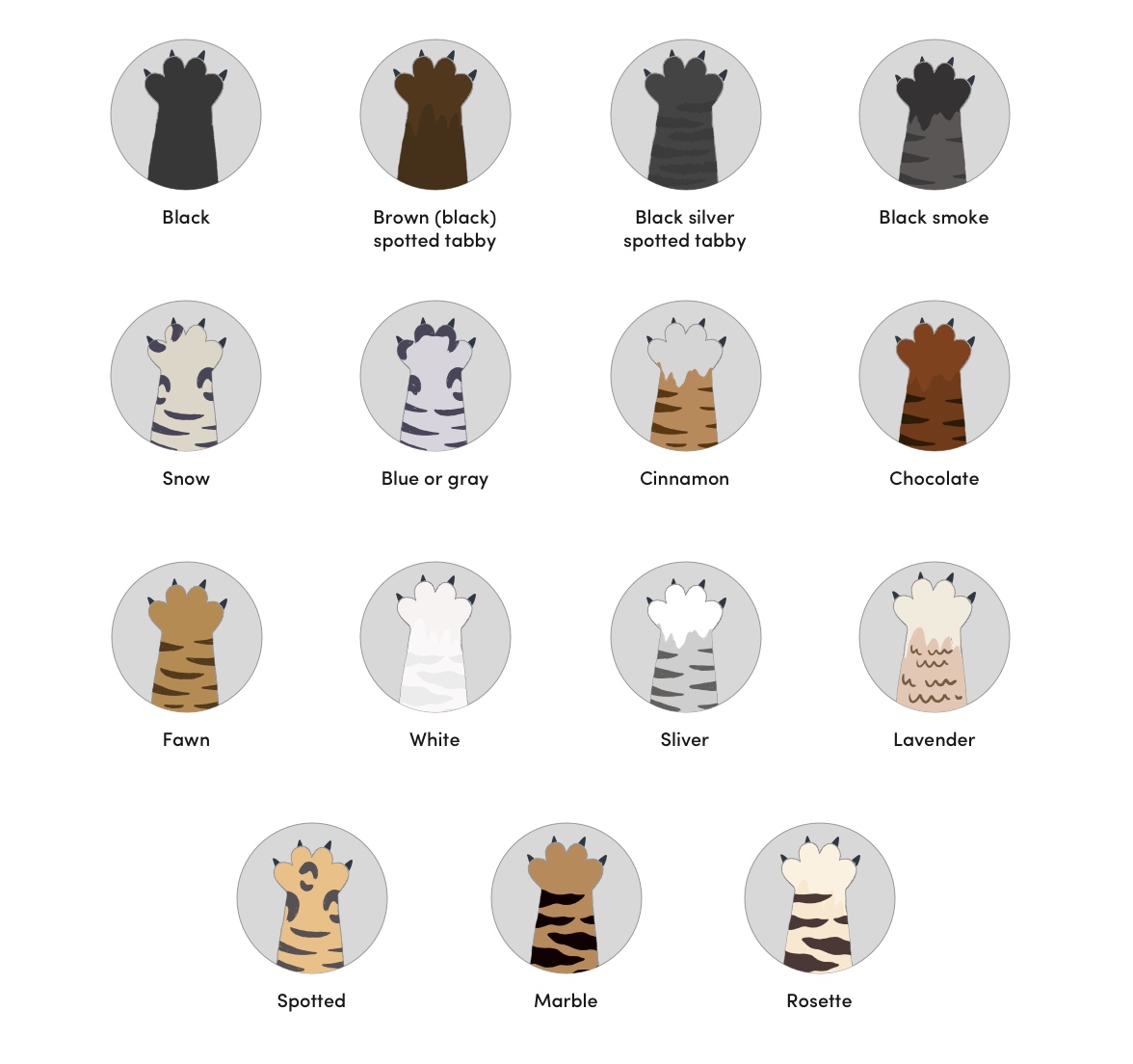 Black Savannah cats may, at first glance, look pure black, but upon closer inspection, you can see that they still have the classic Savannah spotted pattern across their bodies and rings of darker color on their tails. This is known as “ghost spotting.” A black Savannah cat’s paw pads should be dark brown or charcoal and their nose leather solid black.

This is one of the most easily recognizable Savannah cat colors. The base coat color can range from cool beige to a golden yellow, and every shade in between. The spotted tabby markings can vary from a red-toned brown to an inky black. Paw pads should be charcoal or dark brown. Nose leather can be a range of colors, including pink or brick red surrounded by a darker line, solid black, or black with a center stripe in brick or pink.

The base coat of a black silver spotted tabby can vary from a very pale silver to a charcoal grey. Their spots will always be a dark brown to black.

A black smoke Savannah cat initially looks black, but when you part their coat, you can see that the roots of their hair are white. It’s easier to see the spotted markings on a black smoke than a black Savannah. Their paw pads should be dark brown or charcoal and their nose leather solid black.

Besides the four main colors accepted by TICA’s breed standard for the Savannah cat, you may see other colors of the Savannah cat being advertised. While these cats can’t be shown, many owners looking for a pet Savannah cat love these color variations, and they’re certainly eye-catching!

A snow Savannah cat is rare but highly sought after! This pattern is also sometimes called seal or seal lynx. These cats have a very pale base coat, ranging from a pale ivory to a creamy beige. This is overlaid with a pattern in pale browns, showing enough contrast with the base coat to be easily visible. This will sometimes be more visible on the points of the cat, like their legs, tail, and head, and paler across their bodies. Snow Savannah cats often have blue or aqua eyes.

The blue coat color is the result of the black coat being diluted. This is sometimes also referred to as a gray coat. It’s a non-standard color and can be seen in any of the three patterns of spotted, marbled, or rosette.

The cinnamon coat color is recessive and is a warm pale brown coloration that will be overlaid with darker colored markings. Both parent cats must possess this coat color in order to pass it onto some of their kittens, making this coat color very rare, especially since it’s not accepted by the breed standard.

Chocolate is a recessive coat color, leading to a dark brown coat color with warm overtones. Any markings will be in a complementary dark brown to black shade.

Fawn is a warm beige with pink overtones. It’s a diluted version of the cinnamon coat color. It’s a recessive gene, so both parent cats must carry it for there to be any chance of kittens within a litter having fawn coat coloring.

A post shared by A drawer of moments (@lifebydante)

It’s possible to see Savannah cats with white expressed on their coats, although it’s very rare. Some may have white patches, a pale white undercoat, or a white locket. White is not a color that occurs naturally in the Serval, the Savannah’s wild ancestor, but it has been seen in some Servals that were bred in captivity. The incidence of white is thought to be due to inbreeding, so it should be avoided.

A silver Savannah cat is really a variation of the brown spotted tabby, with the addition of an inhibitor gene that overpowers the brown gene. This results in a silver-colored base coat.

This is a very rare color that isn’t accepted by the official breed standard. It’s technically a dilution of brown and is only found when a specific combination of recessive genes is present. Lavender Savannahs have a cream to peach-cream base color, with gray markings.

The spotted pattern is the only pattern accepted by TICA’s breed standard. The cat’s body should be covered in bold spots, which can be round, elongated, or oval. These spots will be dark brown to black in color. From the back of the cat’s head, there should be a series of parallel lines that extend over the shoulder blades and fan out over the back. The spots over the cat’s back should follow this line. On a spotted Savannah cat’s legs, feet, and face, they may have smaller spots.

Spotted Savannah cats also have distinctive markings on their (very large) ears, known as “ocelli.” These are the eye-like markings found in many instances in nature, including on the wings of butterflies and the ears of many wild cats. These markings are thought to confuse predators.

This pattern is recessive and comes from the domestic cat breeds used to initially create the Savannah cat. While it can look more like a wild cat pattern than the spotted pattern, it’s not accepted in the official breed standard and doesn’t actually resemble the pattern of the African Serval cat used to create the Savannah breed. The marbled pattern has large spots and stripes across the cat’s body.

The rosette pattern is another pattern that’s not accepted by the breed standard, but that doesn’t stop people from wanting a rosette-patterned Savannah cat as a domestic pet. These Savannah cats have large oval “rosettes” surrounded by a combination of stripes and spots. This pattern is more similar to a Bengal cat pattern.

How Fast Can a House Cat Run? (Record & Average Speeds)

Some cats might spend more time snoozing than running, while others love to run around the house and play all…
The category

Why Do Cats Headbutt Me? 4 Reasons for This Behavior

If your cat loves to headbutt you, you might be wondering exactly what this means. Does your cat like you,…
The category

Whether you’ve recently adopted a declawed cat or had your own feline friend declawed, buying them an appropriate cat litter…