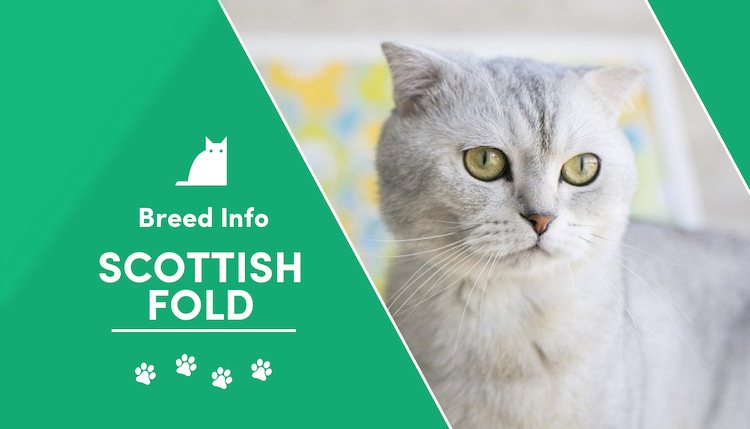 With an appearance that’s often described as owl-like because of their folded down ears and short, puffy fur that almost resembles feathers, the Scottish Fold is an adorable and instantly recognizable cat. The entire breed stems from a single cat named Susie from the McRae farm in Perth, Scotland. Originally named Lops after the lop-eared rabbit, the breed was renamed as the Scottish Fold in 1966 in honor of the country the breed started in and their folded-over ears.

Despite the folded ears, these cats can hear perfectly fine. The condition that causes their ears to fold doesn’t affect their hearing. But the look makes them very popular. Even celebrities such as Taylor Swift and Ed Sheeran are owners of these adorable cats.

Scottish Fold Kittens – Before You Buy…

Loving and affectionate cats, Scottish Folds tend to bond with a single person, making them perfect for individuals. These cats prefer to sit beside you rather than on your lap. They also insist on being the one to decide when affection is given.

But they don’t like to be home alone, so they’re best suited for people with other pets that keep them company. They do equally well with other cats and dogs. They’re also great with children, making them an excellent pet for elderly people with grandkids.

Since they’re used for competition, purchasing a Scottish Fold kitten from a reputable breeder can be quite expensive. If you’re looking for one with a solid pedigree without visible signs of health issues like arthritis, you can expect to pay a minimum of $1,000, with many of them going for $2,000 or more.

Not all popular cats like Scottish Folds are easy to find in shelters that allow adoption or rescue. However, Scottish Folds aren’t particularly rare, so you can often find them for adoption for around $100 if you’re looking for a cat that’s strictly a pet and not intended for show.

The folded ears that give this breed their sought-after look is actually a detriment to their health. It’s a dominant-gene mutation that causes a disease called Osteochondrodysplasia. This disease affects cartilage throughout the body. On the face, it causes the ears to lose shape and flop over. But it can have much worse effects than that.

All Scottish Folds with folded ears have Osteochondrodysplasia, which will cause severe bone and cartilage abnormalities. Many of them develop arthritis, particularly in the tail. This is extremely painful for the cat, starting as young as seven weeks and persisting throughout their life. In extreme cases, it can result in lameness and crippling.

2. Not All Scottish Folds Have Folded Ears

Though named for their folded-over ears, not every Scottish Fold gets the physical trademark they’re known for. All of them are born with straight ears, but about 50% will have folded ears appear around three weeks of age. Scottish Folds are only permitted in show rings if they have folded ears.

3. They’re Not Recognized for Competition in Britain

Because of the health problems associated with the folded ears that give this breed its name, The Governing Council of the Cat Fancy, the UK’s premier cat association, doesn’t accept the Scottish Fold. They’re hoping to prevent the continued breeding of these cats to end the gene that causes Osteochondrodysplasia. The British Veterinary Association actively campaigns to end their breeding.

Temperament & Intelligence of the Scottish Fold

Calm and docile, these cats lack the high levels of energy that some cats possess, but they’re still playful and enjoy chasing toys. Scottish Folds love attention, but only on their terms. They’ll let you know when your love is wanted.

Though they’ll accept love and attention from many people, they only bond with a single person and will make it clear who their keeper is. Still, your Scottish Fold won’t often curl up on your lap, opting for their own space somewhere near you instead.

These cats will get along with everyone in the family, including children. However, they’ll only form a strong bond with one person, so others in the family might feel left out. For this reason, Scottish Folds are best suited for individuals rather than families.

Friendly with just about everyone, Scottish Folds are great with other pets. They get along with most other animals and will do fine with another cat companion or even a dog. These cats don’t like to be left alone, so having another pet to keep them company while you’re gone is the perfect scenario.

Things to Know When Owning a Scottish Fold:

Like other house cats, Scottish Folds will eat a diet that consists almost entirely of meat protein sources. Cats are obligate carnivores, so they get all of the nutrients they need from meat. But your Scottish Fold won’t require any special nutritional considerations. Just be sure not to overfeed them to avoid obesity. Any high-end commercial cat food brand should be a good choice.

Like most house cats, your Scottish Fold is going to require regular exercise to keep it healthy and avoid becoming overweight. Some structured playtime should provide plenty of activity while being fun for both of you and helping to build the bond between you even stronger. But these aren’t high energy cats, so their physical activity needs should be pretty minimal.

Cats are well-known for being intelligent creatures, and the Scottish Fold is no exception. It’s one of the smarter cat breeds and can easily be taught to do basic things. They’ll learn to use the litter box quickly and can even be trained to fetch or to come when their name is called.

The Scottish Fold comes in both shorthaired and longhaired varieties that require different grooming strategies.

The longhaired version needs regular grooming, as often as 3-4 times each week. This will remove the dead hair and prevent matting that can become a serious problem if left for too long.

The shorthaired Scottish Fold doesn’t need much grooming at all. Just comb its fur one or two times a week.

The Male Scottish Fold tends to be much larger than the female. Females will generally weigh 6-9 pounds while males will weigh 9-13 and have a larger, longer body.

The Scottish Fold is an adorable cat, there’s no denying it. They have a playful but calm demeanor and form lasting bonds with just a single person.

But the folded ears that this breed is named for are caused by a bone and cartilage distorting gene mutation that results in these cats often having crippling and debilitating pain and arthritis. There have even been calls to stop the breeding of these cats in the UK.

If you have your heart set on one of these cute cats, then we suggest trying to find one that’s available for adoption or rescue. That way, you can offer a better life to one of these adorable felines without contributing to the continuation of a breed based around known health defects.