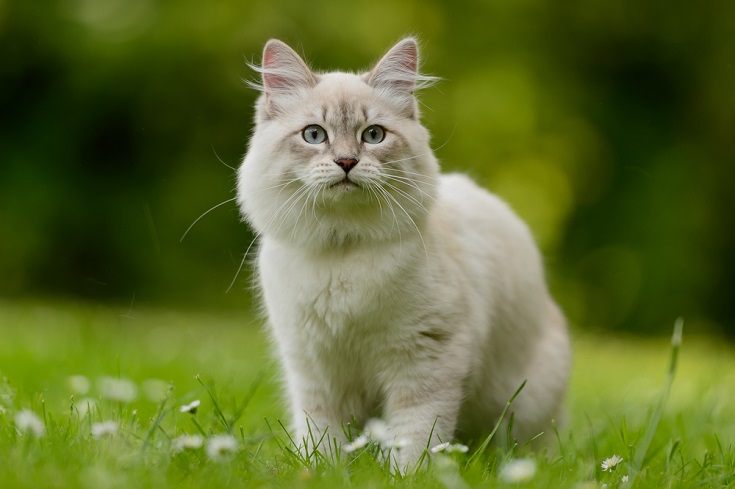 Jaunty, hardy, and oh-so delightfully fluffy, the Siberian cat is a favorite of many cat lovers across the world. And the best part? You can find them in almost any color imaginable!

While these cats have evolved to survive in harsh environments, they are also incredibly personable and easygoing creatures – so we can see why pet owners would want these fearless, friendly, expressive cats in every color.

For all you Siberian enthusiasts out there, we have compiled the 8 coat varieties possible, and detailed which colors are available in each. Keep reading until the end for a few tips on grooming, as well as a mini-history lesson on the breed.

As the name suggests, solid coat Siberians are all one solid color. There is usually little to no shading, and the color will be sound from the tip of the fur to the roots. These striking cats have a level tone from the tip of their nose to the end of their tail.

Chinchilla pattern Siberian cats are rather rare. The allure of the chinchilla pattern is the sparkly, shimmering effect produced by a dense, light undercoat that is lightly tipped by a deep black on the tail, legs, flanks, back, and head.

Shaded Siberians are similar to the chinchilla in the shimmery effect of the fur shading but have a much darker overall color. They have a white or light cream undercoat, and the dark mantle that tips the tail, sides, and face comes in a few rich colors.

These beautiful cats often seem to be one color when lounging, but blur to a lighter, smokey shade when they leap into action! Their white undercoat shades gradually to many striking colors, the gradation of which can best be seen by parting their fur gently with your fingers.

The tabby pattern is made of stark and clearly defined markings, of which there are a variety of colors and shapes. Tabby cats have bracelets of colored markings up their legs, rings evenly spaced on the tail, and well as necklaces on the chest and neck, lines down the head and back, and frowning “M” shape on the forehead.

The point pattern gets its name from how the deepest colors on the cat pool at their “point,” or extremities. The body of the Siberian point pattern is one even color, though slight shading is possible, with a defined contrast between the color of the body and points. The points are unbrindled and can consist of a cat’s mask, ears, legs, feet, and tail.

The lynx point pattern is much like the point, except that the darker spots of color on the cat’s extremities are lined with clear, dark stripes. The body on the lynx point sometimes has very slight, ghostly striping.

Bi-color Siberians are a sort of mishmash of types, and are defined by one particular pattern and patches of white.

The most common eye colors for Siberian cats range from green to gold, and every shimmering color in between. Rarely this breed can have blue eyes, or even two different colors (also known as heterochromia).

Siberian cats are athletic, capable felines with luxuriously fluffy fur and personable natures. They originated in Russia and are perfectly adapted to surviving – and thriving! – in the harsh cold of their native Siberian.

Sometimes called the “Russian forest cat,” Siberian cats have been appearing in historical records and Russian fairy tales since around the year 1000. They have been essential helpers on farms and excel at controlling rodent and vermin populations.

They are also a favorite family pet – generations of Russian families recall the charming personalities and loyalty of their Siberian cats with fondness and a tear in the eye. Before the Cold War ended, they were only found in Russia, but in the 1990s Siberian cats finally made their way into the homes and hearts of Americans as well.

Grooming and Care of Siberian Cats

Siberian cats are lightly fluffy all over with charming accents of ruffs around the neck, full britches, and bushy tails. The Siberian cat is both a rugged, all-weather outdoorsman and an adorably fuzzy companion!

They have a special triple coat that helps protect them from the extreme cold of the Siberian climate. It is incredibly dense, tangle-resistant, and water-repellent. Their medium-long fur is relatively easy to maintain and can be kept looking spiffy with occasional brushing.

So, which color of Siberian cat is your favorite?

Whether you covet the rare, silvery chinchilla or the deep red of the cameo smoke, this list has them all. We hope you got your Siberian cat fix for the day, and maybe even found the perfect furry companion.

If a particular shade or pattern has really caught your eye, check out the Cat Fancier’s Association for more information about breeders that specialize in breeds and specific colors!

Cats can be both indoor and outdoor animals, but there are quite a few risks to consider if they are…
The category

Can Cats Eat Canned Chicken? What You Need to Know

Everyone knows that cats are obligate carnivores. In other words, they evolved to eat meat entirely. They don’t typically eat…
The category

Can Ragdolls be black? It is interesting that this issue still raises a lot of controversy in the Ragdoll community.…