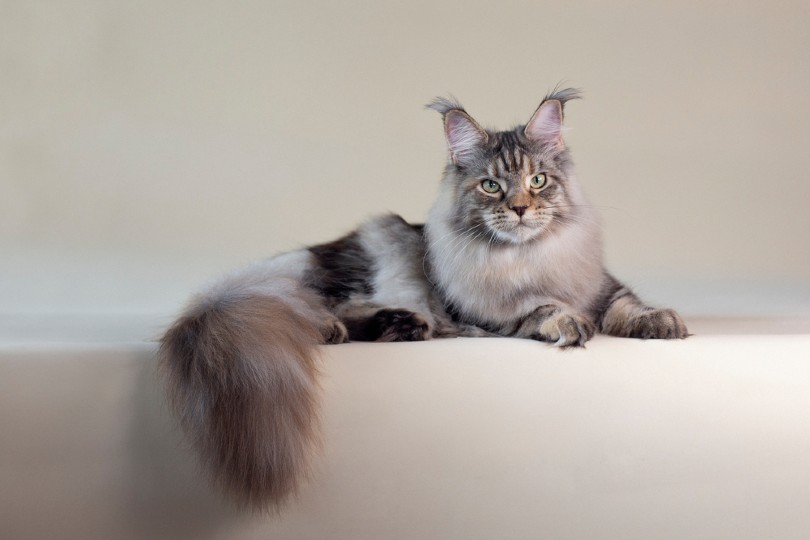 The Maine Coon is an amazing cat breed. It comes with all of the loving playfulness of a standard size house cat but in giant form. And their silver-coated varieties are among the most beautiful of them all.

Silver Maine Coons hold a certain air of mystique. At first glance, they’ll instantly remind you how domesticated cats used to be wild animals. Their physical body structure and poise command respect as they enter a room as if they were feline royalty.

However, you’ll quickly realize that they’re not the divas of the cat world. They’re actually pretty down-to-earth housecats with a whole lot of love to give.

When it comes to owning a Maine Coon, there are a few things that you need to be directly aware of before you purchase.

First and foremost, you’re going to need to consider the size of this fully-grown cat. These are not tiny little buggers that you can easily tote around. They are contenders for the world’s largest cat breed. And if you have a small apartment or tiny living space, you might want to consider a kitten that won’t grow as big.

Second, despite their size, these cats are far from lazy. They’re not the most energetic breed, but they aren’t taking any breaks. They’re as active as the next cat breed and just love to play. That being said, they’re also nocturnal creatures. And the zoomies they’ll experience in the middle of the night may wake you more than other cats due to their size alone. If you think a small Siamese running around at night is loud, wait until you hear a Maine Coon.

Lastly, these cats aren’t for the heavily allergic. Their thick, shaggy coats make them notorious shedders, and this is particularly true for Silver Main Coons. You’re going to need to put in the extra work in order to keep them well-groomed and your furniture hair-free.

Maine Coons aren’t the cheapest cat breed around. As a matter of fact, they made FinancesOnline’s top 12 most expensive cats of 2020 list! At around $1,000, these kittens fetch a high price.

However, it’s not the initial cost of a kitten that’s going to affect your long-term bottom line. It’s their food. These cats are much bigger than other breeds and thus require more sustenance. Also, the more active they are, the more they’re going to need to feed.

1. The World’s Longest Domestic Cat Ever Was a Silver Maine Coon

Although Stewie passed away in 2005, he still holds the Guinness World Record as the longest domesticated cat on record. Stewie was 48.5 inches long when he passed, making him just over 4 feet long!

While you might think that Silver Maine Coons are solid silver in color, you may be surprised to find out otherwise. There are actually several different color patterns—including tabby variants—that classify as a Silver (or Smoke) Maine Coon.

3. A Silver Maine Coon Also Holds the Record for the Longest Tail on a Domesticated Housecat

Cygnus Regulus Powers, a Silver Maine Coon out of Michigan, holds the record for the longest tail with a length of 17.58 inches long! The average length of a male cat’s tail is only 11 inches.

The Silver Maine Coon shares the same temperament as other Maine Coons. It’s a super-sweet and gentle giant who absolutely adores its family. They’re not necessarily the biggest of cuddlers, however, they won’t hesitate to pop down on the other side of the couch with you. They love being able to keep you in their sight.

Silver Maine Coons are also extremely intelligent cats. They love playing with interactive toys and puzzle games to keep them stimulated. They’re also known for their ability to learn tricks and even play fetch.

These gentle giants are amazing with families! Their patience and demeanor keep them active with children, and their size lets them deal with the punishment a younger, rowdy child may dish out. And if things get too out of hand, they’ll simply leave instead of lashing out. They may be aloof with strangers at first, though.

Maine Coons do pretty well with other pets—especially cats and dogs. They’ll see them as another part of the family and a friend. However, you’re going to want to be careful with them around smaller pets, particularly rodents.

Silver Maine Coons were originally used aboard ships and barns for their mousing abilities, and they haven’t lost their touch over all these years. If anything, they have grown more adept at catching them.

Things to Know When Owning a Silver Maine Coon:

Being a parent to a Silver Maine Coon can be a very rewarding experience. However, they’re not necessarily the easiest cat to take care of, and most of that’s due to their size. Let’s take a look at some of the areas of care regarding Maine Coons.

Your Silver Maine Coon doesn’t require any special diet compared to a regular house cat. However, it does need a larger portion size.

In fact, they may be allowed to actually free eat at that age—meaning they eat as much as they want. And that’s because their bodies require so much fuel to keep them moving and growing. However, we do recommend that they get fed a portion of highly nutritious food that’s rich in protein and healthy antioxidants.

Our top choice for our Silver Maine Coon would be Taste of the Wild Rocky Mountain Grain-free Dry Food. It’s got a 42% minimum protein level and tons of antioxidants. We prefer the dry food version because it’s more economical. However, there is a wet food variety available.

When it comes to household pets, normally, larger animals are lazier and more laid back than others. However, such is not the case with the Maine Coon. These oversized felines retain the same amount of energy and activity as any other breed.

So, to ensure they get proper stimulation, you should give them at least an hour of play each day when they’re not sleeping. But it’s going to be in the evening when they really get their energy. Cats are nocturnal by nature, and the Maine Coon is no exception. Be prepared for a herd of elephants to be running around your house in the middle of the night—or at least that is what it may sound like.

Some say that training a cat is impossible. However, that simply isn’t true. Your Silver Maine Coon has the intelligence to learn tricks just as a dog would. Many Maine Coon owners will regale you with stories about how their feline friends love to play fetch and perform other feats. Cats are extremely motivated by positive encouragement as well. So, don’t punish them for doing things wrong. Reward them with love and affection (and treats) for doing things right.

This is where things can get to be a bit more difficult with a Silver Maine Coon when compared to other cat breeds. It’s not that grooming them is so much more difficult, there is simply more of them to take care of.

They’re considered a long-haired breed, and they’re going to need help keeping their luxurious coats in good health. This may require bi-weekly brushings with a slicker brush to untangle all mats and remove excess shedding. Speaking of, Maine Coons are notorious shedders, so you need to be prepared.

Also, you need to stay on top of keeping their claws trimmed down. If you’re not sure how to trim a cat’s nails, this may be best left to the groomer or vet. It can be difficult to tell when you’ve properly cut a cat’s nails. And since the claws of a Maine Coon are substantially larger than other breeds, this can complicate the matter even further.

The Silver Maine Coon doesn’t exhibit any additional ailments compared to other Maine Coon varieties. However, they’re still more prone to some diseases and malaise than other cats such as:

The biggest difference between Silver Maine Coon males and females isn’t a physical one. While the males tend to get slightly larger, it’s in their attitudes that they tend to differ. Males are much more likely to be goofy jesters and the life of the party.

However, that doesn’t mean the females won’t seek out attention. They just tend to do so in a much classier, sophisticated way. And if you think that they’re judging you from afar, you’re probably correct. They’re queens of the cat world and not afraid to let you know it.

The Silver Maine Coon truly is a wonderful creature. Its size and strength are only surpassed by its stunning beauty and ability to keep things relatively cool. As majestic as they may seem, this breed is completely down-to-earth and would rather spend time mousing than getting primped and polished.

If you do intend on adopting a Maine Coon kitten, be sure to ensure that you not only have enough space in your house but in your heart as well. They’re loving and loyal kittens and deserve only the same from you.