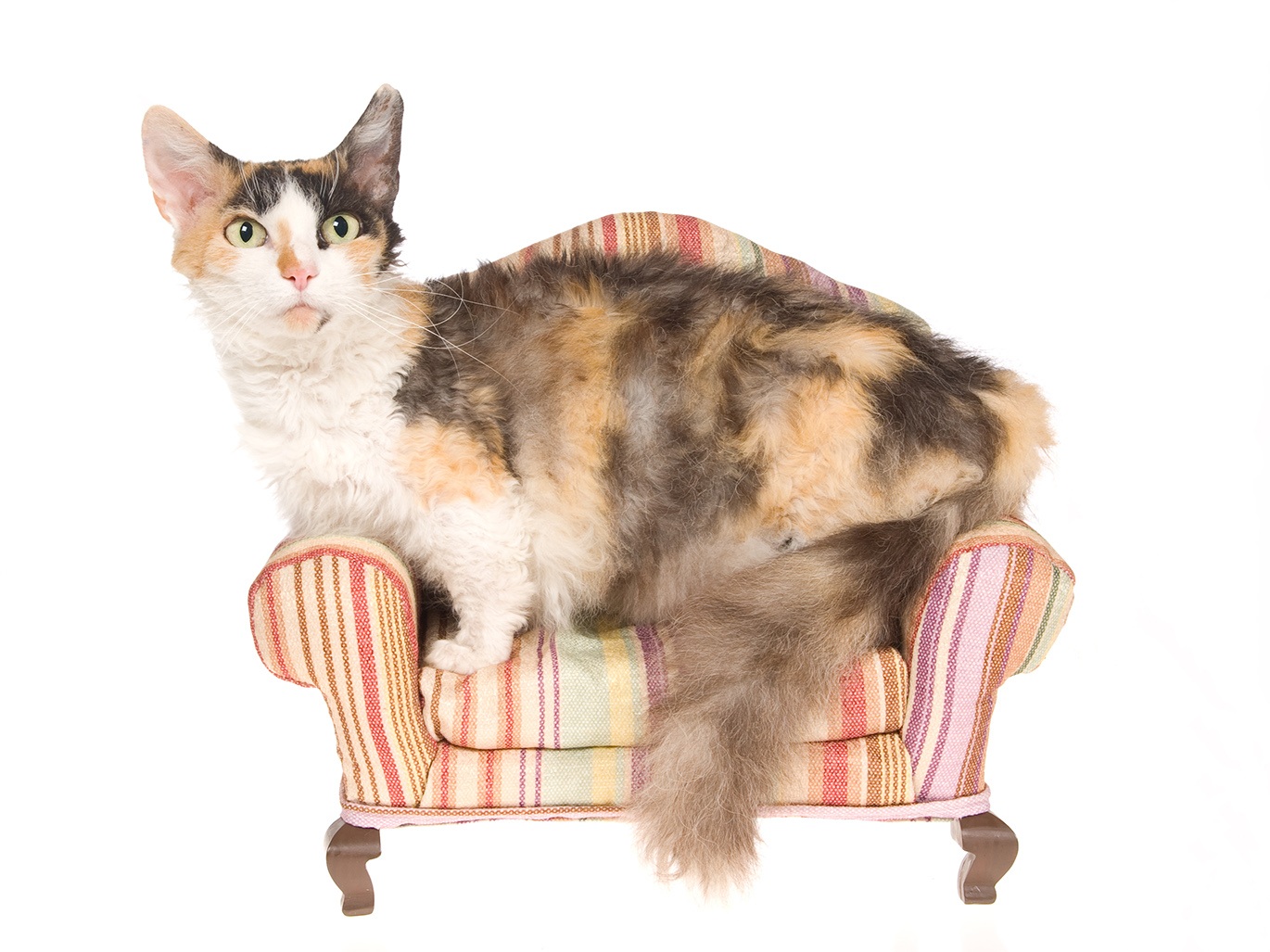 Known as the Shirley Temple of the cat world, this small and interesting feline is instantly recognizable by its trademark curly coat that earned the breed’s nickname. That’s not their only unique and distinguishing trait though. They also have front legs that are much shorter than their rear legs, though this doesn’t prevent them from being speedy, agile little critters.

While this cat’s appearance is certainly distinct, it’s not very surprising when you understand how it happened. This breed is the result of crossing a LaPerm cat and a Munchkin. LaPerms are known for their particularly curly coats, while munchkins are known for their small stature and abnormally short legs. Put them together, and the Skookum is the not so surprising result.

First developed in the US, this breed was created in the 90s by a breeder named Roy Galusha. They have calm yet confident personalities. Skookums can be incredibly loving and sweet with their family, and they love to spend time with their people. Many say that these cats still act like kittens, even as mature adults, which is an ode to their playful, curious natures that can cause them to be downright silly at times.

Skookum Kittens – Before You Buy…

What’s the Price of Skookum Kittens?

Both of the Skookum’s parents are relatively expensive cats, to begin with. But Skookums are an incredibly rare breed, causing them to be far more expensive than either parent breed.

Munchkins regularly sell for more than $1,000. Meanwhile, LaPerms are much cheaper, though still quite pricey for a cat at about $500 on average.

But neither of those breeds come close to the price that a Skookum demands. Skookums are so rare that they go for an average price of $2,000. It’s unlikely you’ll find one for less. That’s quite a bit to shell out for a kitten. In most cases, we’d suggest adoption. But since Skookums are so incredibly rare and valuable, there’s very little chance that you’ll find one available for adoption.

Depending on how you say the name Skookum, it can sound cute and adorable or silly and ridiculous. This is also a matter of personal opinion. Regardless, we can all agree that Skookums have a pretty strange name.

Now, most of the time, breeds with curly hair are called Rex breeds. Think of breeds such as the Cornish Rex or the Devon Rex. But clearly, the Skookum was named in a different way, and the origins of their name are quite interesting.

The name is actually from a native American word that was part of the language the Chinook used. Ironically, given the Skookum’s small bodies and especially short front legs, the word meant great, powerful, and mighty.

2. Their Short Legs Can Cause Problems

Those short legs that are a distinguishing feature of the Skookum breed are no accident. They were bred on purpose by using a Munchkin when creating the Skookum. While their legs are considered cute by many, they can also be a major health concern.

The condition that causes the Skookum’s short limbs is called Pseudoachondroplasia. It’s common for this condition to result in limb deformities that can negatively impact your cat. In fact, some veterinarians are against the breeding of dwarf breeds such as the Munchkin and Skookum due to the major health concern that pseudoachondroplasia creates and the many kittens that die of this mutation prior to birth.

Because of this condition, it’s important to take great care when choosing a breeder through which you’ll purchase your Skookum. Reputable and quality breeders will be testing and watching for the possibility of complications, and actively working to breed it out.

3. This Breed is Still Considered “Experimental”

At this point, the Skookum breed is about 20 years old. While that might seem like a long time, it’s not very long for a cat breed. Take the LaPerm breed, for instance; one of the Skookum’s parent breeds. The LaPerm breed was around for more than 30 years before being awarded championship status and true recognition. The Munchkin was around for even longer.

With Skookums being so new in the cat world, they haven’t had time to truly develop as a breed. The breed standards aren’t fully set in stone and they’re still growing. There aren’t that many specimens yet! Because of this, they’re still considered to be an experimental cat breed.

Temperament & Intelligence of the Skookum Cat

One of the characteristics that the LaPerm breed is known for is their above-average levels of intelligence. Luckily, Skookums tend to inherit this trait, showing advanced intelligence for a feline. If your Skookum takes after the LaPerm side more, then they’ll likely be able to open doors and complete puzzles for treats with ease.

Another trait shared by most LaPerms is an abundance of energy, which Skookums also seem to exhibit as well. Similarly, Munchkins are known for being high-energy, speeding through the house, and giving chase to anything that moves. Even though Skookums have short legs, they’re not slow. With so much energy, they often zip around the house, bounding to high-up places that you might not expect them to be able to reach.

Munchkins are also highly affectionate cats that love to spend time with their family. Most Skookums tend to be the same; wanting as much of your time, love, and attention as possible. Though they’re high-energy felines that love to run around and burn off that energy, they’re also going to want to curl up in your lap for some cuddles and love afterward.

Skookums tend to get along well with just about anyone in the family, including children. They love to receive and give attention, so more people to provide attention is always going to be seen as a good thing by a Skookum.

Skookums are not aggressive cats and they have been known to get along well with other cats. They’ve also been shown to get along with dogs as well, though this is always going to be somewhat dependent on the dog’s personality.

Things to Know When Owning a Skookum Cat:

Like most cats, Skookums will do well on a high-protein diet made up of high-quality commercial cat food. It’s a good idea to feed them a mix of dry and wet cat foods, to provide a diverse array of proteins and nutrients. Even though they have a very unique appearance, Skookums don’t have any particular dietary restrictions or accommodations

Skookums have loads of energy. You’ll need to give them a means to release it, which means providing plenty of toys and activities. Things that really get them moving are great, such as a laser pointer for them to chase or a puzzle box that lets them earn a treat, which can keep them mentally and physically stimulated simultaneously.

These cats are very smart, and you shouldn’t have much difficulty training them to do the basic things you require, such as using a litter box. They’re intelligent enough to learn more advanced things as well if you have the patience to work on it with them.

The Skookum’s special coat is one of the breed’s main distinguishing characteristics. With all that curly hair going every which way, you might expect it to be a time-consuming pain to maintain this breed. But the truth is, they’re actually quite easy to care for.

That coat, while it looks intimidating, only requires minimal maintenance. Brush it twice a week and it’s good to go. Of course, you’re welcome to brush it more often if you like. Skookums enjoy having their hair brushed and it’s a great way for you to bond with your cat.

For the most part, Skookums are a healthy breed. But there’s one major underlying issue that often causes problems for them.

There are some notable differences between male and female Skookums, though they’re all physical. The most obvious difference is in size. Males are 5-7 pounds on average while females are generally a little smaller, weighing in at 3-5 pounds. Similarly, males can reach an inch taller in height.

Skookums are more than just a cute cat with a very unique appearance. Granted, they’re definitely that, with stubby front legs, longer back legs, and a curly coat that some would describe as windblown. Their looks make them distinct, but it’s their loving, affectionate, silly personalities that make them so loved. These cats have loads of energy and just as much love to give, though adding one to your family will prove to be a pretty pricey endeavor.

9 Different Types of Cat Litter: What’s Best For Your Cat?

Buying cat litter would seem to be the most brain-dead decision you’ll ever need to make. After all, the stuff…
The category

Some cats don’t often need their nails trimmed, but others, especially indoor cats, will need regular trims to keep those…
The category

If you’ve ever spent any serious amount of time around cats, you’ve noticed that some cats have more than the…