Siamese cats and Thai cats are quite similar, and many people confuse the two. While both breeds can trace their origin to ancient Siam, over the years, selective breeding has caused the two to diverge a great deal. While alike in coloration, Thai cats and Siamese cats have several notable differences. 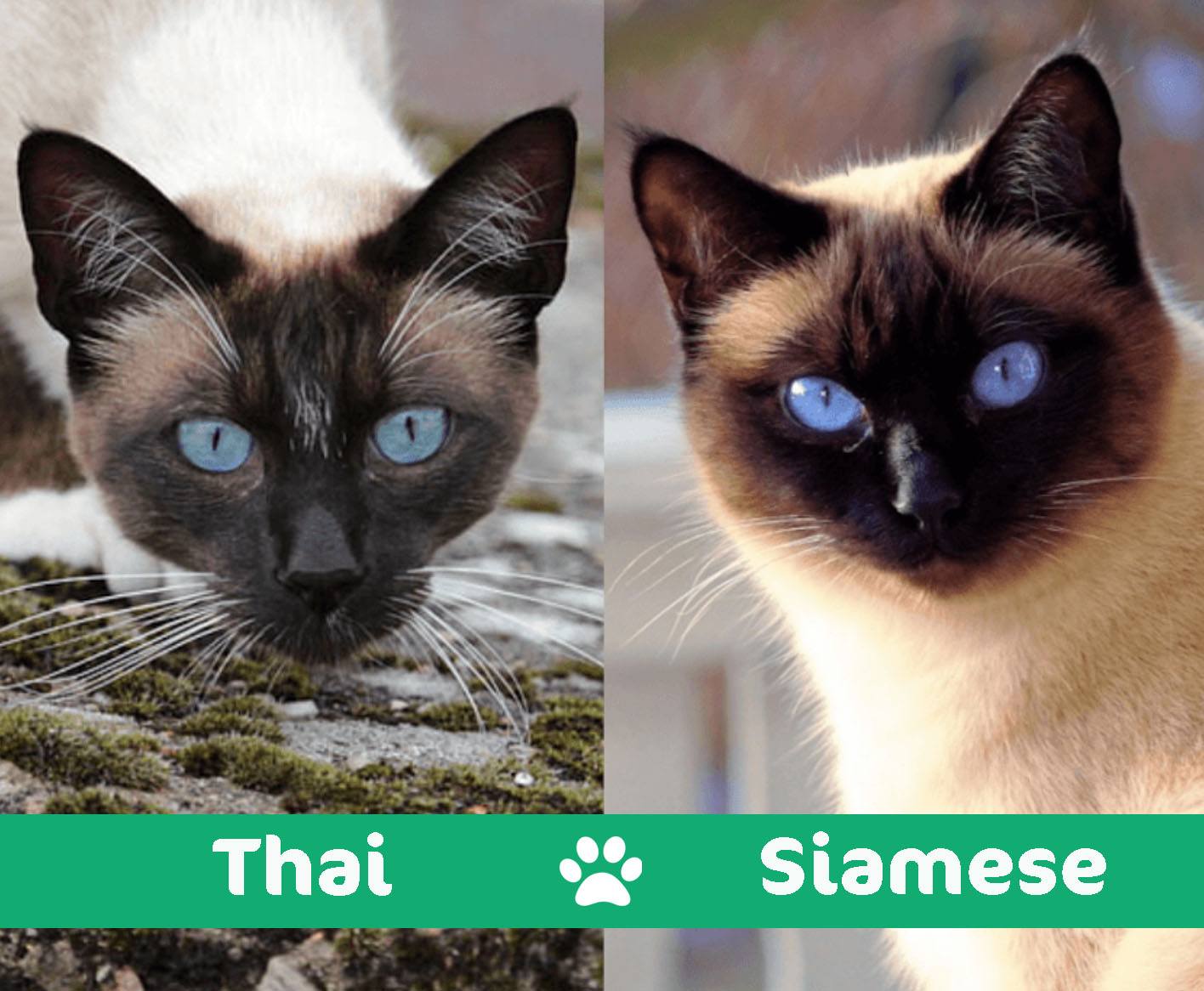 Both Siamese and Thai cats have the same origin. In fact, the Thai cat is sometimes called the Traditional, or Old-Style, Siamese. Through careful breeding, the long legs, thin bodies, and angular faces of the Siamese emerged as the breed standard. About 70 years ago, a resurgence of interest in the Traditional Siamese look led breeders to work toward re-establishing their qualities in the breed; these cats were given the name Thai.

Siamese cats are long and lean compared to Thai cats. Their triangular faces, long tails, and slender legs make them an elegant breed. Siamese cats have the shape of a classic Oriental cat.

Thai cats are much more rounded, with thick paws and shorter tails. Their apple-shaped faces are the easiest way to tell the difference between the two breeds. In terms of shape and stature, Thai cats have more in common with American shorthairs than with Oriental breeds.

Thai cats tend to run slightly heavier than Siamese cats. The average Thai cat weighs between 8 and 15 pounds, whereas it’s rare for a Siamese to exceed 10 pounds. Siamese cats stand about 8-10 inches tall, nearly half the height of their taller cousins. Thai cats can reach up to 23 inches in height at full adult growth.

While the difference in appearance between the two breeds isn’t striking, their coloration is nearly identical. Both breeds have the same distinct pattern: dark points and a light body. Their cream-colored bodies can range from near white to tan, while their ears, face, and legs can vary from smoky tan to chestnut. The dark color of their paws varies as well. Some cats look like they’re wearing tiny brown mittens, while others have full knee-high brown socks. Both Thai and Siamese cats have blue eyes, varying from very light to deep blue.

Siamese cats are quite clever. They tend to bond strongly with their owners and can even act jealous of others if not given enough attention. If a Siamese cat likes you, they will make it clear that you’re their favorite. If they don’t, they will be just as obvious in their dislike. This inquisitive breed doesn’t need a reason to meow; they will take advantage of any excuse to shout at you from the other side of the house. If left by themselves, they will complain about it loudly. A high-energy cat like a Siamese wants to be actively engaged in whatever you’re doing all the time.

Thai cats are much more friendly to everyone and their households, including children and other pets. They’re more able to entertain themselves on their own without the attention of their favorite human. That certainly doesn’t mean they’re quiet cats. Just like Siamese cats, Thai cats are vocal. They tend to be less conversational if they have the company of other cats, but they’re well aware that their noisy yowls always capture the attention of nearby people.

These two similar breeds share many personality traits and common ancestry, but they are quite different in appearance and temperament. Both breeds make wonderful companions and are well-suited to the active life of a show cat.

The Jungle Curl is a hybrid breed, a combination of a domestic cat — typically the American Curl and the…
The category

If you’ve shared your home with cats, you know all about the ones who like to chew your houseplants to…
The category

10 Most Affordable Cat Breeds (With Pictures)

There are many different cat breeds out there. While they might not be as well-known as dog breeds, cats can…