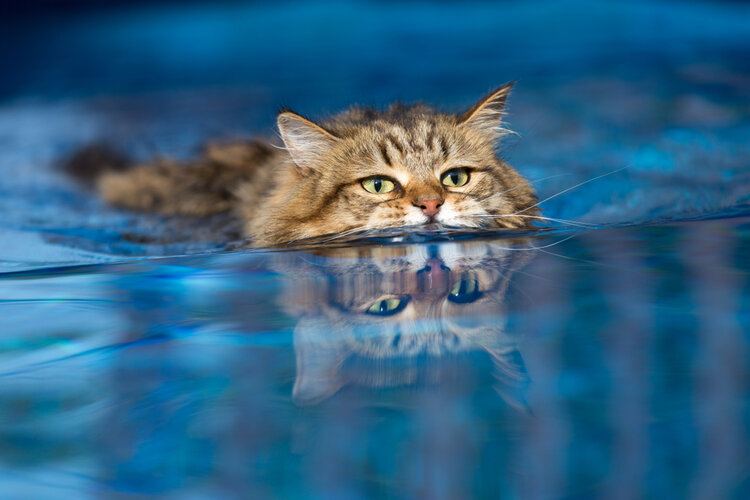 It’s pretty well known that for the most part, cats aren’t too fond of water. They have no problem drinking it, but most will fight to avoid being put in the bathtub. The question is, why do cats hate water so much in the first place?

We’re going to get that. But as it turns out, not all cats are averse to water or swimming. In fact, there are at least 20 breeds that actually love to take a dip! From cats with water-repellent coats to the breed that supposedly swam ashore after disembarking Noah’s Ark, we’ve compiled a list of the top cat breeds that love water with a little information to help you get to know each of them.

This rare breed is known as “the cat in sheep’s clothing.” They’re incredibly curious and playful and aren’t afraid of water. They’ll often play in the water at any opportunity and won’t shy away from bath time.

A double-coated cat that comes with short or long hair in a variety of colors and patterns, the Manx is an island cat through and through. They’re from the Isle of Man; a small island off the coast of Britain, which is likely why they show no fear of water, instead, tending to be curious about it and wanting to play with it. Don’t be surprised to find a Manx playing with any water source it finds, from the sink to the bathtub to the pool out back!

Bengals seem a bit closer to a wild cat than most other domesticated breeds since they were created by mixing a domestic cat with an Asian Leopard Cat. They still look like a wildcat with their striped appearance, just in miniature. Though there’s no wildcat blood left in them today, Bengals still have some of those characteristics leftover, including a love for the water. Don’t be surprised if your Bengal wants to go for a swim or join you in the bathtub!

Originating in the harsh Siberian arctic, this breed is first recorded in 1,000 AD. They’re a medium-sized cat with a thick, triple-coat that’s hardy enough to protect them from the freezing cold. This is likely part of the reason they’re so interested in water. They may not jump in for a full-on swim, but you’re likely to see a Siberian dropping their toys in the water or playing with a water source they’ve discovered.

They may be clumsy, but Turkish Vans are also known for loving the water. So much so that they’ve even earned the nickname of the swimming cat. As the story goes, some of the earliest members of this breed were supposedly aboard Noah’s Ark and got their love of swimming from swimming ashore when the ark ended its voyage on Mt. Ararat.

The Egyptian Mau is the only domesticated breed of naturally spotted cats. You can find depictions of these felines in ancient Egyptian paintings, proving that they’ve been our companions for a long time. They were even brought along on duck hunts, which is likely where they developed their affinity for water that persists to this day.

Talkative, intelligent, and loving, the Siamese cat is one of the most distinctly recognizable breeds of feline. Owners of these elegant cats know that they’re one of the few domestic breeds of cats that truly like water. They’re very curious about water and will often play in it if given the chance. They may not enjoy being fully submerged, but they’re not likely to fight you to avoid a bath either since they do truly enjoy the water.

Not ever Burmese cat likes the water. But this breed is known for their calm, mellow temperament that makes it much easier to get them into the water without a fight. If exposed to the water early enough, Burmese cats often develop a liking for water that causes them to play in it and even learn to enjoy bath time.

Many of the island cats seem to be quite fond of water, and the Japanese Bobtail from the island of Japan is no exception. These slender, smart cats have been around since at least the 6th century as beloved companions of the Japanese. They were originally used by Silkworm farmers to control pests until the Imperial family granted the breed the privileges of the ruling classes, causing them to be treated like royalty.

The short, bobbed tail of the American Bobtail cat is naturally occurring due to a genetic mutation. Combined with their spotted and striped appearance, it gives the breed a distinctly wildcat-esque appearance, though they’re quite calm and domesticated in temperament. Somewhere along the way, this breed developed a love for water that can often be seen today as they play in their water dishes or happily enjoy a bath.

This breed may be mild-mannered, but they look more like a wildcat with their muscular physique and bobbed tails. They’re a naturally originating breed from an island off the coast of Russia. This is probably the reason why they’re often to be found playing in the water today like many other cat breeds that originated on islands.

Adapted for the harsh, cold climate of Norway, the Norwegian Forest Cat has an all-weather coat that protects them from just about any weather conditions you might encounter. Moreover, that coat repels water, helping to keep them warm when they go fishing, as their known to be avid fishers. If you keep one of these feisty fisher felines, make sure you get a lid on your aquarium to keep the cat out!

Once known as the Highland Lynx, this breed had its name changed to Highlander in 2005. This makes more sense since they don’t actually have any wildcat genes. But their love for and fascination with running water might give you the impression that they do! They have no fear of getting wet and will often play with any running water source they find.

This breed looks similar to many other domesticated cats, which is why they were given the name Shorthair in 1966, to distinguish them from the many other cats that were so similar. They were used for eliminating rodents that were making homes in food stores originally. They’re one of the few cat breeds that seem to enjoy the water, choosing to play in it when given the chance and not making a fuss over baths.

Intelligent and curious, the British Shorthair tends to be more playful than fearful or cautious when it comes to water. They like anything that moves and are particularly intrigued by running water. Don’t be surprised to see them playing with running water from the sink faucet or even the shower. Unlike most cats, they’re not afraid of getting wet and might just jump right in!

The largest of all domesticated cat breeds, the Maine Coon is known to have a fascination with water. This likely stems back to their ancestors who spent much of their lives aboard ships at sea. They have very dense, water-resistant fur that’s perfect for keeping them warm in the cold, wet conditions that ships often face. They even have longer fur on their underside and backside to provide extra protection when sitting or walking on cold, wet surfaces.

Courageous and playful, Abyssinians aren’t afraid of too much and their curiosity tends to overpower their caution. Further back in their history, Abyssinians were kept by Japanese sailors as good luck tokens and mouse hunters. This might be part of why they seem to be attracted to water. Plus, they’re naturally proficient swimmers and their shorthair doesn’t weigh them down like other breeds.

Savannah cats are adventurous and playful with personalities that are almost closer to dogs than other cats. They can even be trained to play fetch or walk with a leash. And unlike most cats, Savannah cats love to play in the water and will jump at any opportunity to make a splash.

Sphynx cats have a very distinct look; they’re hairless! This means that they need regular bathing from an early age, which can often result in them becoming fond of the water. They might not have developed this affinity for water naturally, but most of them still seem to enjoy a good bath, swim, or just a little playtime splashing in the sink.

Why Do Most Cats Hate Water?

With so many breeds of cats enjoying the water, it leads you to wonder why most cats seem to hate the water so much. As it turns out, there are several main reasons, and they’re all pretty sensible.

There Was No Need

A lot of things come down to our evolutionary history. Because most species of cat evolved in dry desert landscapes, they never needed to interact with large bodies of water. This meant that most cats never swam or likely even had the opportunity. Even if they did, there would have been no reason.

Being Wet Weighs Them Down

Everyone knows that water makes you heavier. When it gets absorbed into your clothing, it can make you feel slow and weighed down. Now, imagine that your body is covered in thick fur. When all that fur gets soaked, it’s going to be heavy and cumbersome, slowing you down and feeling generally…strange. This is a major reason why many felines hate to be wet and why several of the breeds that don’t mind water have short hair or no hair.

Cats rely heavily on their strong sense of smell, which is much keener than our own. We might not smell the chemicals in our water, but our cats certainly can. These odors can be off-putting for a cat, especially if they were to be covered and soaked in those chemicals.

Being wet can make you slippery and heavy. When in the water, a cat’s coat is also weighing them down and making it much harder for them to move properly. They might also get water in their eyes making it hard to see. On land, they might slip and slide and no longer have their faculties about them. This loss of control can be overwhelming and terrifying for a cat, so it’s no wonder they’ll go out of their way to avoid it.

Like us, cats are colored by their prior experiences. If a cat had a bad experience with water before, they’re likely to be averse to water now. But the same works in reverse. By exposing your cat to water with positive experiences from a young age, they can become more comfortable with it and stop being so afraid of water.

They’re Not Used to It

Many creatures are afraid of what they don’t know or understand; us included. If water is new for your cat, they might just need more exposure to get used to it. It’s best to expose them from an early age, but exposure at any age with positive experiences attached can help to make a cat more open to the water.

Though most cats seem to have a general dislike for water, there are plenty of breeds that actually like the water and might even enjoy a swim or play session at the water’s edge from time to time. Of course, as we discussed, there are some very pertinent reasons why cats don’t generally like the water. But with early exposure and some positive experiences, it’s possible for cats to become less afraid and a bit more curious about the water.