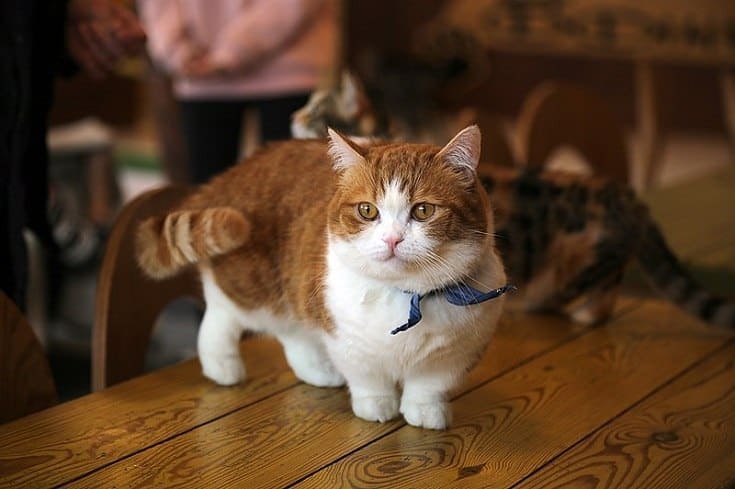 If you are about to purchase a new cat, it’s natural to inquire about which breed is the cutest, especially if you are looking to buy for a friend. While cuteness is purely subjective, we have been able to round up a list of 18 breeds that most people agree are at the top of the pile.

The Abyssinian can is a unique looking breed that features hair with multicolor bands. Each strand of hair can have several color bands, and it has large pointy ears and a long tapering tail. It has unusual intelligence and is extremely outgoing, so they will jump on everyone’s lap.

The American Bobtail is a loving cat breed with a naturally stumped tail. It loves to play and enjoys fetch. It will also hide things around the home for you to find. They will play these games or several hours, and it will try to coax you if you are not playing enough.

The Bengal cat is a breed with a very distinctive pattern on its coat. The pattern can contain spots, marbling, arrowhead markings, or rosettes. This breed is energetic and playful and is one of the few cat breeds that like to play in the water. It’s confidant and curious, and you can usually find them investigating something.

The Birman cat is a longhaired cat that is also called The Sacred Cat of Burma. It has a color-pointed pattern, a form of albinism that puts color only on the face, ears, and tail. Birman cats use a naming convention where every cat born in a specific year has a name that starts with the same first letter.

The British Shorthair resembles the Cheshire cat from Alice in Wonderland. It has a large muscular body and a round head. It’s one of the most popular breeds in Europe, and it has a good-natured appearance and a calm temperament. It’s also one of the oldest cat breeds in England.

The Chartreux is a rare French cat with a permanent smile due to the shape of its head. It’s large and muscular with short limbs and a water-resistant coat. It’s a quiet cat that rarely makes noise, and some cats may be mute. They are non-aggressive, healthy, and they like to travel.

The Cymric is a unique looking shaggy semi-long-haired cat with rounded features and large round eyes. It’s intelligent and enjoys the company of humans. You can also expect them to get along well with other cats and dogs.

The LaPerm gets its name from the tight curls in its fur that cover its body. The tightest curls are on its belly, neck, and ears. It’s available in all colors and patterns. It has plenty of energy and loves to play games with humans or other pets. You’re sure to be the talk of the town with one of these unique cats

The Maine Coon is from the United States and is the largest domesticated cat in the world. It’s a gentle giant that likes to follow you around the house, causing many people to say it has dog-like qualities. It has above-average intelligence and is easy to train. Many people comment on the way this breed likes to vocalize with a wide range of tones.

The Munchkin is a newer breed of cat that is easy to recognize by its short legs. It’s a controversial breed because many people have voiced concern over the short legs causing health issues. It likes it when you carry it, which is good because it may need your help to get up and down from furniture.

Persian cats are another instantly recognizable breed, identifiable by its flat pushed in face and long fur. It originated sometime before the 1600s. It suffered a lot of poor breeding techniques that caused the face to scrunch in and flatten out. This cat is one of the most popular breeds despite its predisposition toward breathing problems.

The Ragdoll is another cat that features the color-point pattern. It’s a large and muscular cat with soft and silky hair. It was created in the 1960s and is a docile breed with a calm and floppy nature. It’s so relaxed in fact that some breeders are considering making them more active for health reasons.

The Ragamuffin is a breed created in the 1990s. It’s a variant on the Ragdoll but has a thick coat reminiscent of rabbit fur. It has a very friendly personality, and like the Ragdoll, it is very lazy. It has muscular back legs and a long bushy tail.

The Russian Blue is a short-haired cat, usually with a grey or “blue” coat and emerald green eyes. It was nearly extinct but brought back after the Second World War. It’s a curious but tranquil breed with a reputation for being sensitive to your feelings and for becoming mischievous if bored.

The Scottish Fold kitten gets its owl-like appearance from a genetic condition in its body that affects the cartilage. It affects the ears in a way that causes them to bend forward, contributing to its unique appearance. This breed has the reputation of being unusually affectionate and loving toward other family members.

The Siamese is one of the most well-known cats and features the color-point pattern on its fur and has bright blue eyes. It has an elongated muscular body that you can find in literature dating back to 1351. It’s intelligent and enjoys being around people. Modern breeding techniques have somewhat altered the appearance, creating a new version, but you can still buy both.

The Siberian cat is another ancient cat breed well suited to cold weather environments. It has long fur and strong claws, and many believe it is the ancestor to all modern longhaired cats. They are available in many colors, and though they shed, many people suffer fewer allergy symptoms.

The Turkish Angora is another ancient breed that may be a direct descendant of the African wildcat. This breed usually has long white fur, but you can also find them in other colors. The Turkish Angora is athletic and playful and smart enough for you to teach several commands. They tend to seek out the high spot in the home but get along well with other animals.

While one person may say a particular breed is cute and another person may say it’s ugly, it’s hard to argue the 18 breeds’ attractiveness on this list. The LaPerm, Turkish Angora, Maine Coon, and Siberian breeds are among our favorites. We hope you have found a favorite as well.

If you have found a new pet and learned of a new breed you had not heard of before, please share this guide to the 18 cutest cat breeds on Facebook and Twitter.