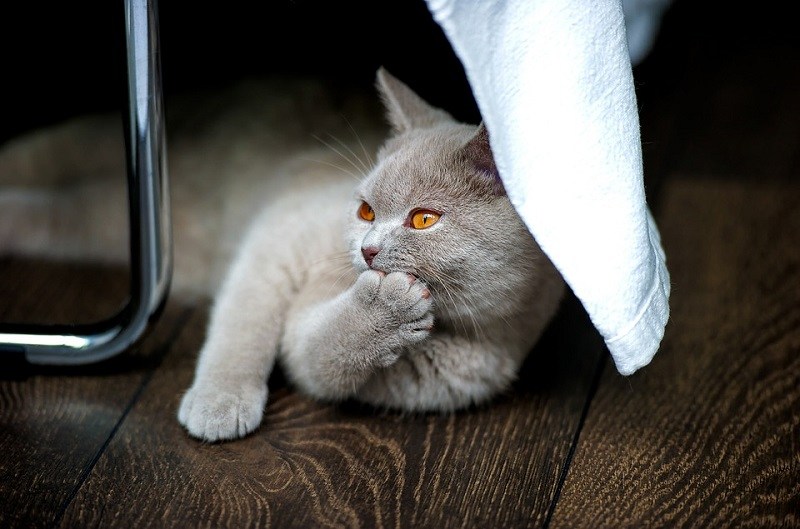 Fluffy cat breeds: you either love them or hate them. They have tactile, soft coats, and look like teddy bears. They also tend to leave more fur behind on sofas and require a lot more grooming. Below is a list of 15 of the fluffiest cats we know. Use this to find the one for you or give them a wide berth when choosing your next feline friend.

Perhaps the best known of the fluffy breeds, the Persian is also one of the most popular purebred cat breeds. His coat is beautiful and long and he has an undeniably gorgeous face, as well as a melodic voice. What’s not to love about this breed? Well, that coat does require a lot of care and attention. You will need to brush it daily with a metal comb. He will also need bathing weekly and this will be followed by a blow-dry and more combing. Finally, you’ll also have to wash around his eyes daily to get rid of tear stains. The Persian is beautiful, but he is high maintenance.

The Maine Coon is a giant cat. He has a bushy tail, a furry neck, and furry feet. While he’s big and striking in appearance, he is a very friendly feline. And not just with you. The Maine Coon is friendly with anybody willing to stop and admire his luscious coat. His coat only needs weekly brushing because it will rarely matt. The Maine Coon is relatively low maintenance for such a furry feline.

The Ragdoll has striking looks, not just because of his fluffy coat but because he has piercing blue eyes. He is big and gentle and will get along with people, other cats, dogs, and virtually anything. The Ragdoll gets his name because he goes limp like a ragdoll when he is relaxed. In a lot of respects, he is more like a puppy than a cat, and it is possible to teach him to play fetch. This is another furry breed that only requires weekly brushing, and so is low maintenance despite looking the contrary.

Cousin to the Ragdoll, the Ragamuffin shares a lot of similarities with the breed. He is fluffy and has the same weekly brushing requirements. He also goes limp when relaxed, and some Ragamuffins can be trained with basic commands. He will follow you everywhere you go, and because he meets you at the door whenever you get home, it will feel like he sits and waits for you.

The Himalayan is a specific colorpoint of the Persian and is more properly referred to as the Himalayan Persian by some cat registries. However, he was created by crossing the Persian with the Siamese, which gives him the furry coat of the Persian but the coloring of the Siamese. He can be considered lazy and he needs the same daily brushing as his Persian cousin. He will love his family but may not have as much time for strangers.

The Somali is a close relative to the short-haired Abyssinian. He has the same muscular, athletic physique, but he has a long, furry coat. He requires plenty of exercise and does shed quite a lot, but he does not require daily brushing. In fact, a weekly brush should prove ample to get rid of knots and to remove dead hairs. The Somali is a very sociable cat that will get on with everybody, whether they’re family or passing strangers.

The Birman originates from Burma and, according to some rumors (probably started by the Birman cats themselves), he originates from temple cats. He is quite a large cat, is considered very calm, and he will form a very close bond with his owners. Some will also enjoy the attention of passers-by, although this isn’t guaranteed with this breed. He’s very playful, but only in short bursts, and you’re just as likely to find the Birman curled up asleep as chasing a ball around. He requires weekly brushing to look after his beautiful coat.

The Siberian has a thick, double coat. This would have been used to protect the breed from freezing cold Siberian conditions, and he can still survive cold conditions today, although he would much rather be sat indoors on your lap. He is a very intelligent cat, gets on with all members of the family, even canines, and he sheds a lot less than some other long-haired fluffy breeds. For most of the year, the Siberian requires only weekly brushing, but during shedding season he will need daily brushing to remove the clumps of fur.

The Norwegian Forest Cat is the official cat of Norway. He is a muscular cat with moderate energy levels and is child-friendly, dog-friendly, adult-friendly, and stranger friendly. He does prefer to be up high, so you should consider investing in a climbing tree, and be prepared to look for him on top of cupboards and inside your Christmas tree. In terms of grooming, be prepared to brush once or twice a week.

The Turkish Van is unique in several ways. First, he is one breed that not only tolerates water but loves spending time in it, which has earned him the nickname of the swimming cat. He even has a waterproof coat. He also has oddly colored eyes, typically with one green eye and one blue eye. He is very energetic and will get along with all family members. He’s also intelligent so he probably knows that he only needs weekly grooming but will try to persuade you otherwise if he enjoys it.

The Japanese Bobtail is considered good luck in his home country of Japan. Thankfully, considering the attention this gets him, he is a very friendly little chap who will get along with everybody and everything. Of course, he has a bobtail, which means that it is short and kinked. He is active and clever, as well as being a generally healthy cat, and requires brushing once or twice a week, but more often during shedding season.

If you’ve ever seen a Scottish Fold or Highland Fold, you’ll probably remember. His ears are folded forward, although not all examples of this breed have the folded ears. The Scottish and Highland Fold are actually slightly different, and if you’re looking for a furry cat, you will want the longer-haired Highland Fold. He will get along with all the family but isn’t as active as some of the other breeds on this list. He will need combing twice a week to keep his coat looking healthy and unmatted.

The Turkish Angora is smaller than a lot of the breeds on this list, but despite only having short- to medium-length hair, he definitely qualifies as fluffy — especially his tail. Although most of us think of the Angora as being a white cat with striking eyes, he can actually come in any of a number of colors and patterns. Regardless of their markings, expect a lively and energetic cat that gets along with everybody and only requires weekly brushing. You should also bathe him every few months.

The British Shorthair is another fluffy cat that needs weekly grooming and might benefit from the occasional bath. He does shed quite a lot, but he is considered a fairly lazy cat, happier in the confines of his own home or curled up on his owner’s knee. He is very affectionate with family, including dogs and children, but he won’t immediately take to strangers. Once he gets beyond the stranger stage, though, he will demand attention from his new friend.

The Exotic Shorthair has the same face as the Persian, but his coat is shorter and requires a lot less tending. You will need to brush every week, but this is far easier than the daily brushing and weekly bathing of the highly demanding Persian. They are livelier, but they are also happy to spend time curled up with their favorite family members. They are less tolerant of children and dogs than other breeds, though.

Fluffy cat breeds do not necessarily have long hair. While some, like the Persian, require a lot of grooming and care, others only really need a weekly brush to prevent matting and to remove loose hair. As well as grooming level, choose your fluffy feline friend according to their friendliness, social requirements, and energy levels.