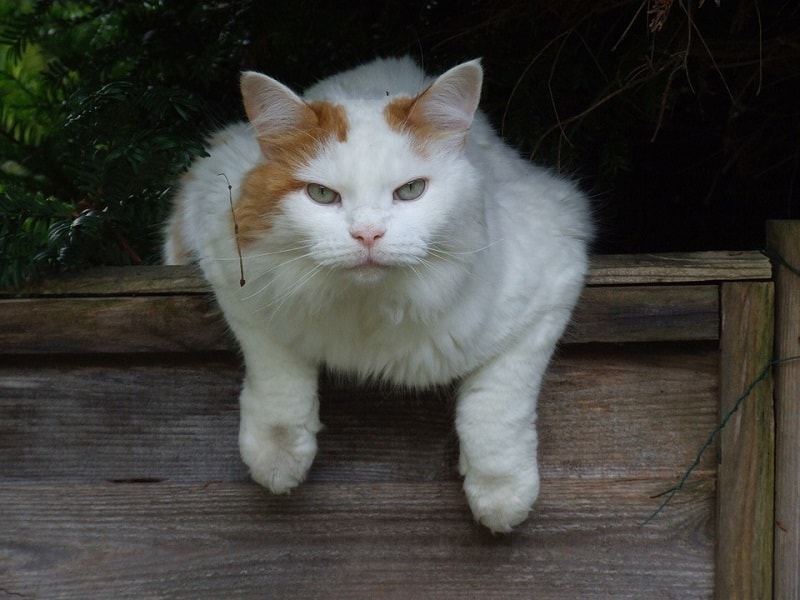 The Turkish Van is an ancient breed with mythological origins. They’re athletic, highly-energetic felines with a strong draw to mischief. This is a breed that’s always on the go, wanting to spend its time playing, climbing, and exploring. You’ll frequently find your feline perched at the highest point inside the home. Make sure you don’t leave any valuable heirlooms up there — your Turkish Van might knock them down. It could be on purpose, or it could just be due to their clumsy nature.

Families with a Turkish Van often say that their cat always believes itself to be in charge. You can see this in their dignified manner. They’re not animals that like to be carried or snuggled. However, they do bond closely with their family members and are likely to follow you around the house. Even for homes with children or other pets, a Turkish Van can be a great fit. That is, of course, if you can find one!

Turkish Van Kittens – Before You Buy…

If you’d like to add one of these beautiful felines to your family, you better be prepared to cough up a hefty sum and spend quite a lot of time searching for a specimen. This breed is one of the rarest in the US, with only about 100 kittens being born each year.

It doesn’t look much better in other places either. Originally from Turkey, the breed is highly prized by the Turkish people and is currently undergoing preservation efforts by the Turkish College of Agriculture. No longer are Turkish Vans able to be exported from the country.

Since they’re so rare, it shouldn’t come as much of a surprise that Turkish Van kittens are prohibitively expensive. Moreover, they’re generally hard to get and you’ll likely spend a lot of time on a waiting list before receiving your kitten.

Prices for purebred Turkish Van kittens start around $1,000. Some can be even more expensive if they come from championship lineage. And this covers just the initial cost of purchasing the kitten. You also need to factor in additional expenses, such as health care, bed, food, litter box, and more.

Due to their rarity, it’s unlikely that you’ll find a Turkish Van available for adoption. However, you’re more likely to find a mix with some Turkish Van in them. You can usually adopt a kitten for $75-$150, so this is a much easier and more economical route to take.

3 Little-Known Facts About the Turkish Van

1. They’re Known as the Swimming Cats

It’s well-known that most cats have a strong aversion to water. But if you’ve heard the Turkish Van’s nickname as the swimming cat, you’d know that they’re the exception to the rule. These cats are attracted to water. You’ll often find that your Turkish Van becomes quite interested when you turn on the water for the sink or shower. They love to paw the water and splash around, and they’ll do so just about every chance they get.

2. They’re Ensconced in Religion and Tradition

Many animals play roles in ancient legends, but the Turkish Van’s story is deeply mired in religion and mysticism. Even the breed’s attraction to water is explained by a biblical tale. As the story goes, there were two Turkish Vans on Noah’s Ark. They swam to shore, landing in Turkey, at Mount Ararat. This location is close to Lake Van, which is where the breed gets its name.

But that’s not the only religious story involving this breed. There are stories in both the Jewish and Islamic traditions to explain the cat’s color spots. While Turkish Vans are mostly white, they do have reddish-orange tails and another large spot on their back and head.

The spot that’s commonly seen on a Turkish Van’s back is called the thumbprint of Allah because, in the Islamic story, Allah left the mark after touching the cat’s back. In the Jewish version, the cat had a door slammed on its tail in the ark, which caused it to turn red. Then, God touched the Van on its head, leaving behind a mark from the contact.

Obviously, with tales of the Turkish Van reaching all the way back to the biblical story of Noah’s Ark, this breed has been around for a long time. Few breeds have earned their status as an ancient breed more than the Turkish Van. But despite their long history, they weren’t recognized by the Cat Fanciers’ Association until 1994! This is because the first time a Turkish Van landed on American shores was in 1982.

The breed did receive some official recognition prior to this in the UK, however. They first arrived in the UK in 1955, nearly 30 years before one would make it to the USA. In 1969, the Governing Council of the Cat Fancy, a UK-based cat association, officially recognized the breed; still 13 years before a Turkish Van would first arrive in America.

Temperament & Intelligence of the Turkish Van

Turkish Vans have seemingly endless amounts of energy. They love to play, climb, jump, run, and just generally have fun. Like dogs, these cats love a good game of fetch. Unlike most other pets, they also love to play in the water and will do so for extended periods.

These cats bond with every member of the family and they’re very forward about their feelings in all situations. But they’re not the type of cat that wants to spend the evening cuddled up on your lap. They’d rather find a high perch to climb to or a toy to play with. If you’re going to keep a Turkish Van, you’ll need to make sure you offer plenty of entertainment, lest your valuables become your cat’s entertainment as it chucks them from the highest shelves in your home!

Because they’re not particularly selective between family members, Turkish Vans are great cats for families, so long as no one is overly touchy and affectionate with the cat. But having several people around will prove to be beneficial as these cats want to play a lot and will require more attention than many other breeds.

While not all cats get along well with kids, Turkish Vans seem to. You’ll need to make sure your child understands how to interact with a cat, though. Your Van won’t be pleased to have its hair or tail pulled and might react in a way that your kid won’t enjoy!

Turkish Vans always believe that they’re in charge of the household. As long as everyone respects the cat’s feelings of superiority and leadership, everything will be fine. This includes other pets. Your Turkish Van will get along with pretty much anyone, dogs and other cats included, provided they all act like the Turkish Van is the supreme overload of everything in the home.

Things to Know When Owning a Turkish Van:

These cats do well on a diet consisting of high-quality commercial food; both dry and wet varieties. They don’t have any special dietary needs that you need to account for. That said, this is a breed that is quite prone to obesity. You’ll want to take care not to overfeed your Turkish Van to prevent unnecessary weight gain.

Because Turkish Vans are such active felines, you’ll rarely have to worry about exercise. They’re constantly running and playing, which burns off a lot of that energy and helps to keep your cat healthy.

You won’t need to provide structured exercise for your Turkish Van, but you should definitely have regular play sessions that get the cat going. You can go for old favorites like a mouse toy that the cat can wrestle with or a laser pointer on the wall for it to chase.

Considered to be highly intelligent cats, Turkish Vans are rather open to training. They learn the basics very quickly, such as using the litter box. But they can also learn additional training and tricks. Many of them will learn to fetch with minimal effort and enjoy playing it regularly. If you have sufficient patience, you can train a Turkish Van to do just about anything a cat is capable of.

With such a luxurious coat and appearance, you might expect the Turkish Van to require excessive amounts of maintenance and grooming. Luckily, you’d be wrong. These cats have a single coat, making them easy to brush and care for. All you have to do is comb or brush it out once or twice each week and your cat’s coat will stay in top shape.

Aside from coat care, all these cats need are the basics. Keep their nails trimmed and teeth clean and your Turkish Van should stay healthy for many years.

When you purchase a cat like a Turkish Van, it’s important that you get a guarantee from the breeder regarding the cat’s health. While these cats are known to be mostly healthy, there are some health conditions that can occur. It’s wise to know the signs and symptoms of any possible health problems so you can spot issues when they first pop up and take swift action.

Obesity: Obesity can occur in any cat, but Turkish Vans are more susceptible than some breeds. Thankfully, this is a disease that can be easily avoided by taking a little extra care to measure out your cat’s food and ensure you’re not overfeeding it.

Hypertrophic Cardiomyopathy: This is a condition that causes the walls of the heart to become thicker. Effects range from no symptoms to congestive heart failure, making this a serious issue that should be dealt with immediately if you see any signs or symptoms, such as heart murmurs or arrhythmias.

When it comes to personalities, male and female Turkish Vans are quite similar. Major personality differences are mainly individual. However, physically, males are much larger. They can weigh up to 18 pounds while females top out at about 12 pounds. Similarly, males tend to be a few inches longer.

If you’re looking for a cuddly lap cat to curl up on you and snuggle during your favorite movie, then the Turkish Van isn’t going to be a good fit. On the other hand, if you want a cat that’s fun to play with and offers hilarious antics for your enjoyment at the cost of a bit of mischief, then the Turkish Van is perfect for you. They can even do well with children and other pets, so long as everyone understands that the Van is ruler of the household.

Why Does My Cat Lick Himself When I Pet Him? 4 Reasons for this Behavior

Cats engage in many behaviors that can leave us scratching our heads and wondering what’s going on. If you’ve found…
The category

As well as their elegant body shape, large ears, and charismatic personalities, Siamese cats are famed for their pointed coat…
The category

The Highlander is a large, curly-eared, stubby-tailed cat breed that is growing in popularity. It’s really no surprise since they…