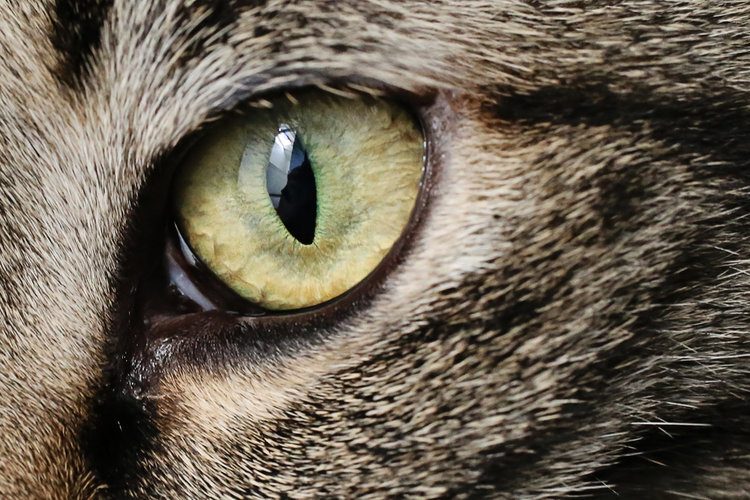 Many cat parents can happily get lost staring into their cat’s beautiful eyes. But do you know if your cat has a rare eye color?

Domestic cats can have a range of eye colors, more than many other domestic species, including dogs.

While some eye colors are linked to specific breeds, others can be found in many different purebred and mixed breed cats.

The color of a cat’s eyes will depend on the levels of melanin that have been passed onto them in genes from their mother and father cats. Melanin also controls the levels of pigment in the skin and fur.

The more melanin your cat inherits, the darker their fur will be. But that same rule doesn’t apply to the color of their eyes because melanin affects their eyes differently. So, your black cat could have blue eyes!

All kittens will be born with eyes of cloudy blue. At roughly six weeks, this color may start to change to reveal their true eye color. This is when the melanin starts to take effect. By the age of 12 weeks, a cat’s final eye color will be fully developed.

Are breed and eye color linked?

In some cases, they are. The color of a cat’s eyes is genetic, just like the color of their coat. Certain breeds will only ever be seen with one shade of eye color.

Siamese cats are probably the best example of a breed with an eye color that’s linked to their coat color. All Siamese cats have blue eyes in varying shades of intensity.

Generally, purebred cats will have more vivid shades of eye color than moggies.

Eye colors and their rarity 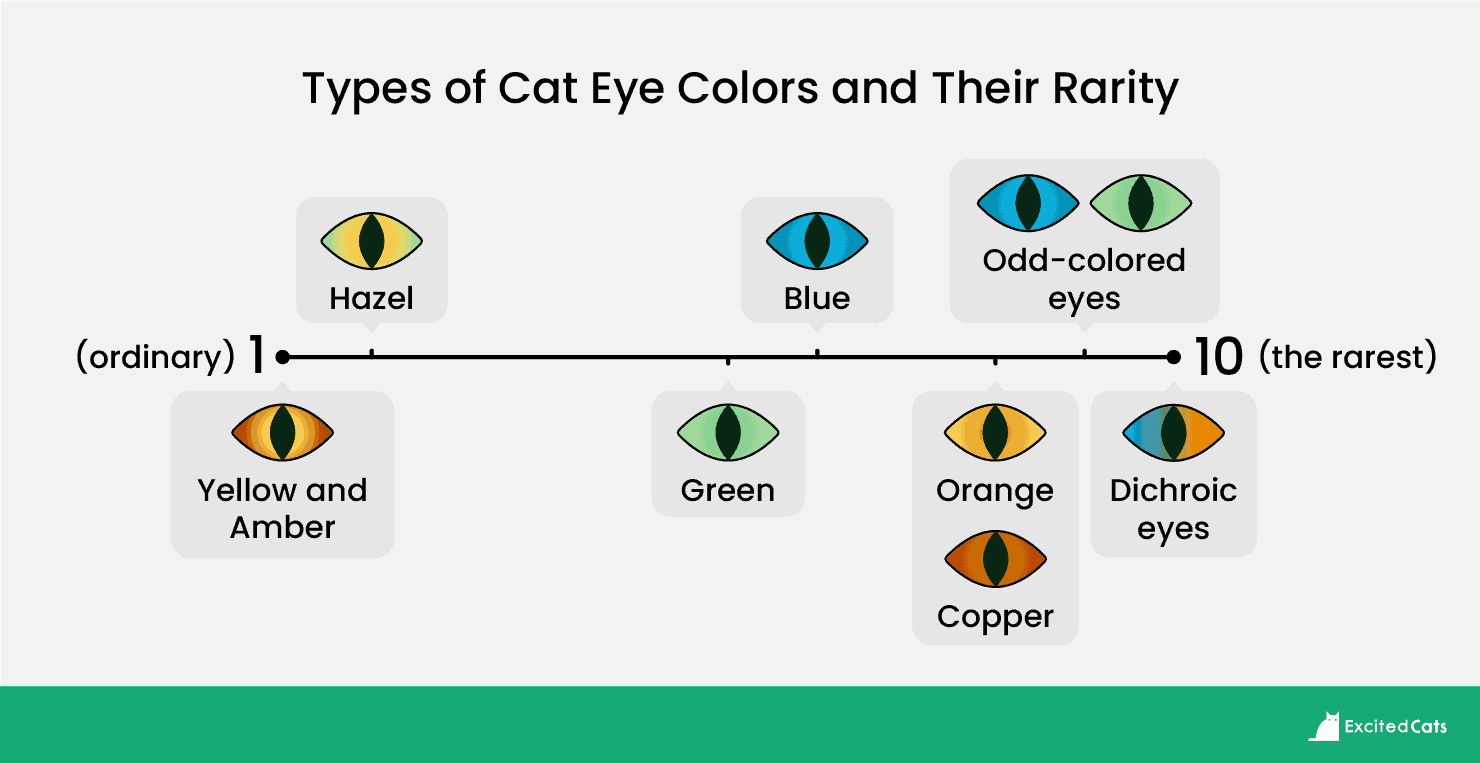 Let’s take a look at all the possibilities for a cat’s eye colors. We’ve included eight of the typical eye colors seen across a wide range of cat breeds. We’ve also listed their rarity on a scale of one to 10, so you can know for sure if your cat has an unusual shade!

These colors aren’t discrete, so you may find it difficult to pin your cat’s exact eye color into a specific shade. Maybe your cat has an eye color that sits somewhere between two shades. It’s easier to think of cat eye colors as a spectrum of shades that blend into each other rather than distinct bands.

Cats with blue eyes actually don’t have any melanin in their irises. Blue cat’s eyes are clear, but we see the blue color due to light reflecting around the curved sides of the irises. It sounds far-fetched but it is true!

Blue eyes can range from a pale sky blue, all the way to a deep and brilliant sapphire.

Blue eyes are far more common in white cats. This is due to the dominant white gene, also known as the epistatic white gene. This gene blocks out any other genes that code for color, and this is what results in a completely white coat. White cats with blue eyes due to the dominant gene are also at higher risk of being deaf than white cats with green or yellow eyes. This is because the gene that codes for a white coat and blue eyes can cause the cochlea of a cat’s inner ear to degenerate within days of birth.

Certain breeds are known for their distinctive blue eyes. These include the well-known Siamese and Ragdoll breeds. Other breeds that can have blue eyes include the American Shorthair, British Shorthair, Balinese, Persian, Maine Coon, and Devon Rex.

Tonkinese cats have an unusual aqua blue eye color that isn’t seen in any other breed.

The green of a cat’s eyes can vary from a green with yellow undertones to a true green and a green mixed in with shades of blue. It’s also sometimes possible to see flecks of gold or yellow within the iris of a green-eyed cat.

Green eyes are found in breeds like the Egyptian Mau, which has green eyes in a bright gooseberry shade. Havana cats will have emerald green eyes, and Norwegian Forest Cats can have eyes in a range of green tones. Russian Blue cats also have vivid green eyes!

Hazel eyes are a blend of green and golden yellow. This is the eye color of most wild cats in temperate regions, including Lynx and Bobcats. It’s also a common eye color in feral cats.

Breeds that can have hazel eyes include the Abyssinian, Bengal, Singapura, Cornish Rex, and the Scottish Fold.

Yellow eyes can range from a pale lemon yellow to golden shades, merging into a deep and rich amber.

The Burmese cat breed can have particularly striking golden eyes, with show cats often having shades of impressive brilliance and depth.

While it can sometimes be difficult to define the difference between a green eye with yellow flecks or a yellow eye with hints of green, there’s no confusion when it comes to orange cat eyes. This color was originally developed by British cat breeders who wanted an eye color that could stand out in vivid relief against any coat color.

Breeds including the Devon Rex, Japanese Bobtail, American Wirehair, Maine Coon, and the Turkish Van can all have orange eyes.

Copper is the darkest eye color you’ll see in cats. Their eyes will be light brown with tones of red and orange. Sometimes there may be flecks of yellow, green, or orange. This is a rarer color than some others, and while it’s distinguishable from orange, it’s just as unusual.

The Japanese Bobtail, Maine Coon, Persian, Cornish Rex, and Chartreux can all be found with striking copper eyes.

Have you ever seen a cat with odd-colored eyes?

The technical term for odd-colored eyes is heterochromia iridium, which refers to the fact that each iris is a different color. This can be inherited, congenital (a genetic “mistake” as the cat’s embryo is developing), or the cause of an accident or injury.

Odd-colored eyes are most often seen in white cats with the epistatic gene. Usually, one eye will be blue and the other green, hazel, yellow, or orange.

Cats with dichroic, or dichromatic, eyes will have a combination of two distinct colors within both eyes. This is stunning and very rare indeed! It’s caused by the cat having different levels of melanin in distinct sections of their irises.

Sometimes, the eyes will have a distinct oval of one color nearer the pupil, which then blends out into another color. Other times, the colors will be split into sections, so a quarter or half of the eye will be one color, and the remaining section will be a different color.

Sometimes, one eye will be solid colored and the other will be dichroic.

Whatever eye color your cat has, it’s absolutely perfect! It’s the combination of each cat’s eye color, coat color, and personality that make us love them no matter what.

If you have a cat with one of the rarer eye colors, we’ve love to hear from you in the comments below.

Glucosamine is known to help relieve joint problems in humans, and it can probably do the same thing for your…
The category

It can be upsetting if your cat spends more time running away from you than sitting on your lap. As…
The category

Applehead vs. Wedgehead Siamese: What’s the Difference? (With Pictures)

Siamese cats are one of the most popular and recognizable cat breeds, with their pointed coats, unique vocalizations, and deep…