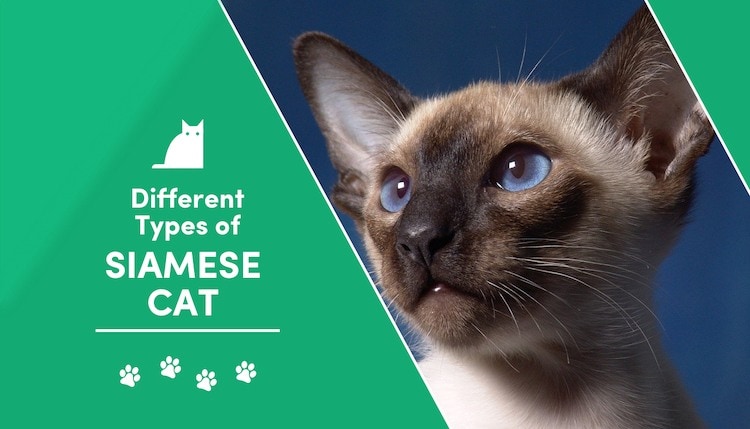 The Siamese cat is one of the oldest breeds in existence. Dating back hundreds of years in Thailand, there are hieroglyphic depictions of what researchers believe is the Siamese feline. If that was not enough to give this sleek and beautiful cat an air of royalty, the fact that they are revered as some of the best show cats in the world would put them over the top.

Siamese cats became popular in the United States around WWII. They gained a reputation for independence, gracefulness, and charm. It was in the mid-1950s that they started to be seen as snobby, mischief-making, even cold felines due to their depiction in the Disney film The Lady and the Tramp.

In actuality, these cute furballs are sweet, even-tempered, and loving. Below, we will look at the nine different kinds of Siamese cats and their traits.

The 9 Types of Siamese Cats

The Traditional Applehead is the stocky version of the Siamese cat. They have a very round “apple” like head with a nose that points downward. They have larger frames than their counterparts, and they have smaller ears. They tend to stand taller, as well.

These adorable cats are very friendly, they love people, and enjoy cuddling while sitting on your lap. They also are quite vocal and will let you know if they want or need something. As far as care, this feline has short fur so grooming is minimal. They also rarely require baths. That being said, they can obsessively groom themselves and create bald spots. This is typically due to stress though.

The Old Style puss is another Siamese who is attached to their owners. They love to follow you about and stick their nose in your business. Although they are not as vocal as the Applehead, you will still hear about it if there’s an issue. What’s more, their larger ears make them more prone to ear infections.

The Classic version is the most athletic and tall version of the traditional Siamese. They have long, sleek bodies with a long tail. Their ears are slightly bigger along with a pointed face and slightly upturned nose. The Classic cat is more energized then the other two, as well.

Just like the other two, however, this is an affectionate cat. In fact, they can be pushy about getting pats and cuddles, even if you are busy doing something else. They are prone to the same ear infections and obsessive grooming as the other two, yet their self-fur care is not as prominent a part of their personality.

The Modern Wedge became popular in the 1980s. They have a very narrow “wedge-like” heads with big pointy ears that are set lower on the side of their heads. Their body is lean, long, and very athletic. Unlike their traditional cousins, they have slanted eyes and wide noses that point straight out.

This breed of Siamese feline is the current show cat, and they share the same affectionate and sweet disposition as the rest of their family. Unfortunately, though, the cross-breeding has caused some of the Modern Wedges to develop kidney disease. Though it does not affect them all, some only live five or six years.

Besides the specific family, the Siamese cat also comes in five different coat styles. All of them have short, silky fur, however. They don’t require much grooming besides finger combing. The beauty of their fur is the point of color. They have a base of white or cream, but their face, paws, and tails are darker in color. In contrast to their bright eyes, it is striking. Also, any version of the Siamese cat can have any type of color point fur.

The Seal Points have a cream color base with darker fawn points on their face, paws, and tail.

This style of Siamese has a cream-colored base with chocolate brown colored points. They typically look similar to the Seal Points, but with a more marked contrast in color.

This beautiful fur has a blueish white base with blue-ish gray points on the face, ears, and lightly on the tail and paws.

This is a rare Siamese that has a white base contrasted with gray points that have a pink twinge.

This Siamese cat has a white to the cream base with reddish fawn spots. They are rare, and as of now, they are not recognized as a “point” because it is not part of the traditional color set.

It is interesting to note that all Siamese kittens are born white, and the color point darkens as they grow. These adorable cats are sweet, affectionate, and great for families regardless of which breed or type that you pick.

We hope you have enjoyed this break down of the different styles and families of the Siamese cat.

dog around to keep them company while you’re at work, they’ll be much more likely to find ways to pass the time before you get home.