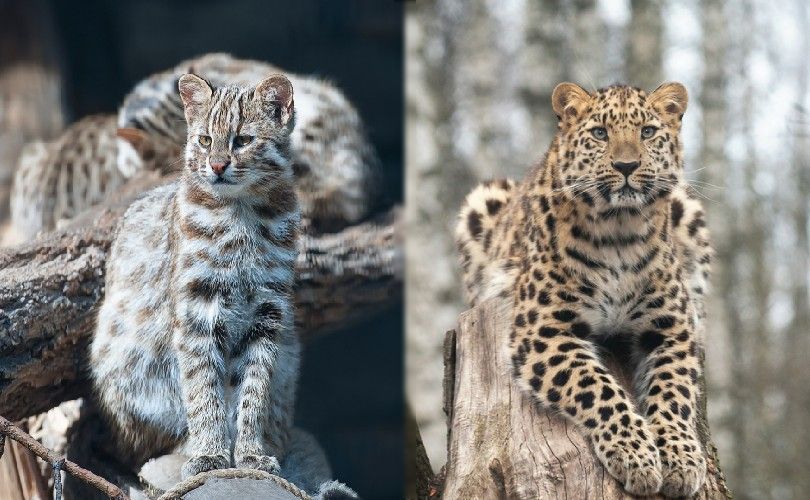 The Ussuri is a naturally occurring hybrid that originated from Russia in the Amur River region. There is very little information about this breed’s origin, and what we know is conjecture history at best. However, the general view holds that the cat is a crossbreed of small wild cats (Amur Forest cats) and a subspecies of the Asian Leopard cat (Amur Leopard cats).

Allegedly, the semi-wild Ussuri later mated with the Siberian cat and the Domestic Shorthair, giving birth to what we call the Ussuri cat today. Most of the information available about this feline’s origin is also based on their appearance.

The Ussuri features a wild look and has an athletic, well-boned body with a graceful appearance. The medium-sized head is round, and the chin is perfectly shaped without being protruding. Its medium-sized legs are well-muscled, strong, sturdy, and appear rounded. Similar to the European Wildcat, the tail is rounded at the tip.

However, not many have laid their eyes on the Ussuri due to their rarity. Even in its origin country Russia, the breed has declined significantly after interbreeding with domestic cats in the region. If no breeding programs are created to preserve it, the Ussuri faces imminent extinction.

Ussuri Kittens – Before You Buy

What’s the Price of Ussuri Kittens?

Currently, there are no breeding programs dedicated to perpetuating the breed. The majority of remaining Ussuri cats are naturally occurring, and even these are rare in Russia. Ideally, Ussuri cats should cost between $800 and $1,500.

3 Little-Known Facts About the Ussuri Cat

1. They Often Have Lynx Brushes on their Ears

Some individual Ussuri cats usually have “lynx” brushes at the tip of their ears. This is a rare occurrence that is often present in some wild varieties of cats.

2. The Breed is Not Recognized by Associations

The Ussuri is a rare breed with no clear breed status. It is not recognized by most associations, including TICA and CFA.

In the mid-1990s, a translated breed standard for the Ussuri breed got published. However, nothing has transpired since that time.

Temperament & Intelligence of the Ussuri Cat

The Ussuri is an intelligent and adroit cat. Having been born in the wild, they have a natural talent for hunting. And they will rid your house of rats, lizards, mice, and other tiny intruders.

Their hunting prowess makes them independent. Ideally, you should not expect them to follow you around the house, meowing for food. Sometimes they can even disappear after breakfast only to return later in the evening.

But that does not mean the cat is not sociable. Ussuri cats usually form a strong bond with one member of the family. Moreover, they love attention and can be quite playful. However, don’t expect them to sit on your lap.

The Ussuri loves to spend its time outdoors hunting rather than snuggling up to you on the couch. Therefore, if luck brings one your way, be prepared to give it freedom.

The Ussuri may be wary of strangers, but it can be the perfect pet for the right family. Although it is a one-person cat, it is affectionate towards all members of the family. However, it may not be suited for families with small children.

The cat’s independent nature makes it the perfect choice for singles and families who can’t handle needy pets. If you don’t like the idea of your cat following you around the house constantly meowing for your attention, this is the ideal feline for you. Its low-maintenance grooming needs also means you will have more time on your hands to do other things.

The Ussuri is a natural bred hunter. Therefore, its hunting instincts should be higher compared to other cats. That is unfortunate news for those with other pets living in the home. The cat’s high prey drive is likely to kick in when interacting with smaller pets.

Things to Know When Owning an Ussuri Cat:

The Ussuri’s wild origin gives it unique traits and characteristics that may not be present in regular domestic cats. If you are lucky enough to get your hands on this rare breed, here is what you need to know beforehand.

An Ussuri needs to eat a well-balanced diet that caters to their wild nutritional needs. Since they may not survive on commercial foods, you need to feed them fresh meat. Your vet can also recommend nutritional supplements.

Naturally, the cat is not a compulsive eater. A nutritious-packed breakfast is usually enough to last them an entire day of play. Plus, their hunting ability makes them less dependent on you for food. However, this is no excuse to underfeed your pet.

These cats are naturally gifted athletes with exceptional abilities, and they need adequate space to run, jump, and climb. Therefore, they are not suited for apartment living. Since they spend most of their time outdoors, you need to keep a close eye on them lest they disappear into the wild.

Toys such as scratchers can keep the cats busy. However, they must be sturdy enough to withstand tough clawing and chewing. If you buy flimsy toys, they will not stand the test of time. Additionally, the cat could swallow small loose pieces and choke if the toy comes apart.

The Ussuri boasts a short, glossy, close-lying coat and a thick undercoat below it. Its shedding is seasonal, meaning that it requires minimal grooming. You only need to brush the coat occasionally (preferably twice or thrice a week) to maintain its glossy appearance.

However, the Ussuri is capable of looking after itself. In fact, it is likely to decline your help in grooming. But if you start handling it from a young age, it might even allow you to trim the nails and brush its teeth. If your feline doesn’t permit any form of handling, it is better not to force the issue.

The Ussuri is generally healthy and may not fall sick as often as regular domestic cats. Owing to its wide genetic pool, the breed is not associated with any genetically inherited health conditions. Nevertheless, the cat may attract general feline health issues, albeit rarely.

Therefore, you need to schedule at least one visit to the vet annually. Although Ussuri cats are healthy in the wild, confinement life puts them at risk of developing stress and other mental health problems.

Male Ussuri can grow to be a bit bigger and more muscular than their female counterpart, but the difference isn’t vast. The major differences in sex will be most obvious before spaying and neutering occur when behaviors like spraying will arise. Speak to your vet about getting your Ussuri fixed at the right age to avoid these pesky habits.

The Ussuri is one of the rarest breeds of cats in the world. And it is not easy to find one. Moreover, its population continues to dwindle as more of its members interbreed with domestic cats.

With no hope for a breeding program dedicated to preserving the breed, the Ussuri will likely become extinct. Therefore, if you have any hopes of making this wild-looking cat your pet, there’s no time like now.

If you own an Ussuri, you have to give it freedom. The breed is independent and will usually ignore people and pets they have no interest in. Overall, the Ussuri is a reserved feline with an independent nature. But it is also affectionate and playful. Born with a natural talent for hunting, this cat will make an excellent mouser. However, it is not good with other pets and is not an ideal option for families with small kids.

Can Cats Eat Sweet Potato? What You Need to Know!

Sweet potatoes seem to be gaining traction in the pet food world. You may see lots of dog foods advertised…
The category

While choosing the right brand and flavor of cat food can be difficult, it’s substantially easier to pick the right…
The category

Can Cats Eat Potato Chips? What You Need to Know!

You settle down in front of the TV, open your bag of potato chips and crunch your way through your…