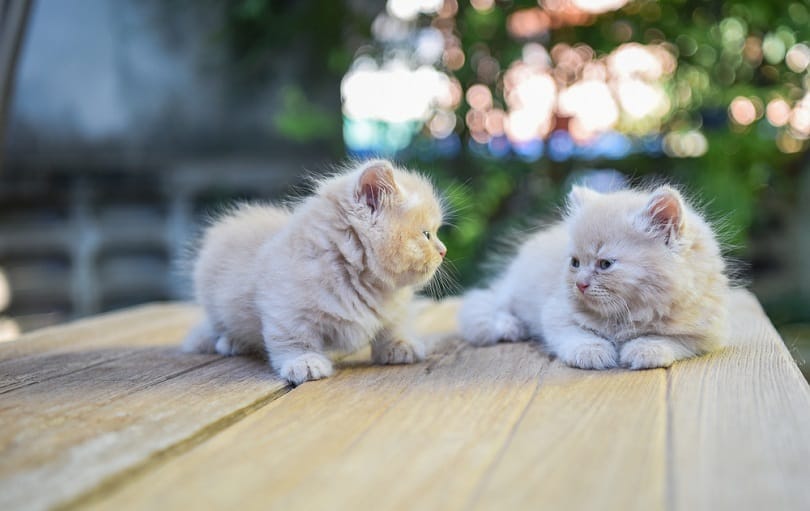 White cats are stunning, with their pale coats making their eyes pop. If you’ve been dreaming about adding a white cat to your family, we’ve rounded up 25 different cat breeds that can all be found with striking white coats. Some of these cat breeds come with a pure white coat, and others have pale markings or points.

One thing to remember about white cats is that they can be more likely to be deaf than other colored cats. This doesn’t mean they can’t live happy and healthy lives; it’s just something to bear in mind. We recommend chatting to the breeder or rescue center where your cat is coming from to get a bit more information.

The American Curl is a small to medium breed, with distinctive curled back ears. They are sometimes nicknamed the “Peter Pan” cat breed due to the fact that they keep their kitten-like sense of playfulness all the way into adulthood. They can have short or long hair, but either way, their coat is relatively low shedding.

The medium to large American Shorthair is famed for their ability as a hunter. While protecting feed stores from vermin was the original purpose of this breed, they’re now better known for their friendly, laidback natures. They love attention from kids but don’t appreciate being picked up against their will!

These elegant cats are medium in size, and while they might have an aristocratic look about them, they have playful and extroverted personalities. This breed is called the Balinese or Javanese depending on their coat coloration, and confusingly, this breed is sometimes also known as the Colorpoint Longhair!

The easy-going British Shorthair is a medium to large breed that loves being with people, but on their own terms! They may follow you around the house when you’re home, but won’t necessarily like being picked up. They can be playful kittens, but adult British Shorthairs are often calm and enjoy long naps on the couch.

The British Longhair is a cross between the British Shorthair and the Persian breeds. They’re also sometimes called the Lowlander breed. These friendly cats are outgoing and affectionate, as well as having stunning long coats, which do require grooming to keep them in good shape. This relaxed breed can easily become overweight if fed too much.

With their huge ears and silky cats, there’s no mistaking the Cornish Rex! This small to medium breed is active and engaging. They love to play with their families, as long as they can be the center of attention! Their soft coats don’t have guard hairs like most other cat breeds. They love to learn tricks and are great fun to train.

Another Rex breed with a curly coat, this time from Devon! All Devon Rex cats can be traced back to the Kirlee, the founding ancestor of this breed. Devon Rexes are sometimes called “poodles who purr,” due to their sociable natures and adorable habit of wagging their tails when they’re happy. These small to medium cats love sitting up high and watching the world go by.

The large European Shorthair cats have sleek and shiny coats. They can often have two different colored eyes, although only the amber and blue combination is accepted by breed standards. This breed is outgoing and adaptable, making them a great choice for families. These loyal and athletic cats are often said to be the first true “house cat,” as they were one of the first domesticated breeds.

The independent and sweet Himalayan breed is a great choice if you’re looking for a chilled-out cat that doesn’t mind keeping themselves entertained while you’re at work. These medium to large cats do love plenty of playtime, but they’re just as happy to curl up for a nap too! Himalayan cats look similar to Persians, except for their distinct colorpointed coats.

The distinctive Japanese Bobtail is an ancient breed, believed to bring their owners wealth and luck. This medium-sized cat has a definite cheeky side, and they love to carry objects that they’ve collected around the house. They come in both long and shorthaired varieties, both having the bob tail that gives this breed their name.

This rare Thai breed is sometimes called the Diamond Eye cat. Their name translates as “white gem,” which gives us a clue that all cats in this breed are a pure white. This medium-sized breed has striking gold or blue eyes. Occasionally, a cat will have odd eyes, one blue and one gold. This breed is active and intelligent.

The medium-sized La Perm is an outgoing and friendly breed, with a distinctive rippled coat. Their hair can go from gently wavy to tight corkscrewed curls. They love attention from humans and will often want to curl up on your lap. These inquisitive cats make great playmates for kids and get along with other pets.

The huge Maine Coon is as famous for their dense coats as for their large size. These gentle cats make wonderful family pets, as they’re playful, outgoing, and affectionate. They’re perfectly adapted for cold weather, thanks to their tufted paws and ears and their profusely thick coats. This breed is the official state cat for Maine.

Munchkin cats are famed for their short legs, although this breed has caused controversy. Their short legs are the result of a deformity that can lead to skeletal problems for these little cats as they grow older. Munchkin cats have plush coats, but they’re best kept indoors as they’re not capable of running or jumping as effectively as other cats, if they need to get out of trouble.

The large Norwegian Forest Cat is known for their love of high places, so if you don’t know where your cat is, look up! These independent cats love doing their own thing and may be stand-offish with strangers, but around their families, they’re affectionate and loving. Unlike many other cat breeds, they can enjoy playing in water when they feel like it!

The Oriental Foreign White was founded in the U.K. around 1950. This medium-sized breed was created by crossing Siamese and British Shorthair breeds. This breed is also sometimes called the White Siamese, as they retain all the characteristics of Siamese cats, minus the colorpointed extremities.

The Oriental Shorthair is a small to medium cat that has large ears and an elegant body. They’re similar to Siamese cats but can have solid-colored bodies in a range of different colors. These cats are outgoing and playful and love attention. They can often form strong bonds with their owners. As they’re so sociable, they’re happiest in a multi-pet household.

The Persian breed is famed for their docile personality. While these medium to large cats might be laidback, they’re also independent and can be selective about whom they bond with. Persians enjoy the occasional play session but they’re not overly energetic. Their most distinctive feature is their snub noses, combined with round heads and small ears.

Ragdolls are medium in size and are named for their sweet habit of laying limply when carried. Ragdolls have colorpointed coats, so creamy white Ragdolls will have slightly darker points and sometimes tabby stripes. They love hanging out with their human owners and can be trained to play fetch, sit, and plenty of other tricks!

The medium-sized Scottish Fold has folded ears that give them an appearance not unlike an owl. This is down to a natural genetic mutation, and the folding doesn’t affect their hearing in the slightest. They have a dense and full coat that requires a great deal of grooming, as they shed more than most breeds. These cats love to lie in strange positions, like on their back with their paws in the air!

They might not have a pure white coat, but the elegant and medium-sized Siamese can have a pale creamy white body with lilac points, which is pretty close! These clever and sociable cats are famed for their vocal and outgoing personalities. They love attention and are playful enough to enjoy interacting with kids and other pets.

The large Siberian cat has a dense coat that looks stunning in white. These cats were built for snowy conditions and have tufted ears and paws. Unlike many other cat breeds, Siberians enjoy playing in water. They’re intelligent and active, so they can easily learn tricks like fetch and high five. Given their forest background, it’s no surprise that they also love to find a high place to sit!

The medium-sized hairless Sphynx can have markings on their skin, which means you can get a pure white Sphynx with pale pink skin. These friendly cats have large ears and a playful outlook that makes them great fun to live with. While they’re called hairless, they actually have a fine coating of down all over their bodies.

The medium-sized Turkish Angora is thought to be the first European longhaired cat breed. These playful and active cats are graceful and extroverted, so you’ll always know where they are — most likely looking for attention! Pure white is the traditional color for this breed, although if they have blue eyes, they might be deaf.

Turkish Van cats have pure white bodies with markings on their heads and tails. These can be in a wide range of colors, from tabby to cream. This rare breed has distinctly longer hind legs, meaning they are skilled at jumping to places that other cats can’t reach! They have a semi-long coat, and their affectionate nature means they love spending time with their owners.

See also: our article on Black and White Cat Breeds.

Top 7 Natural Sources of Taurine for Your Cat

Taurine is an amino acid that’s an essential part of any cat’s diet. It’s especially valuable for heart health, but…
The category

21 DIY Cardboard Cat House You Can Build Today (with Pictures)

If you have a cat, you know it can be very difficult to find toys that will entertain them for…
The category

How Long Do Cats Live? Everything You Need to Know!

We’ve all heard that cats have nine lives. But how much of that is actually true? Do cats seem to…