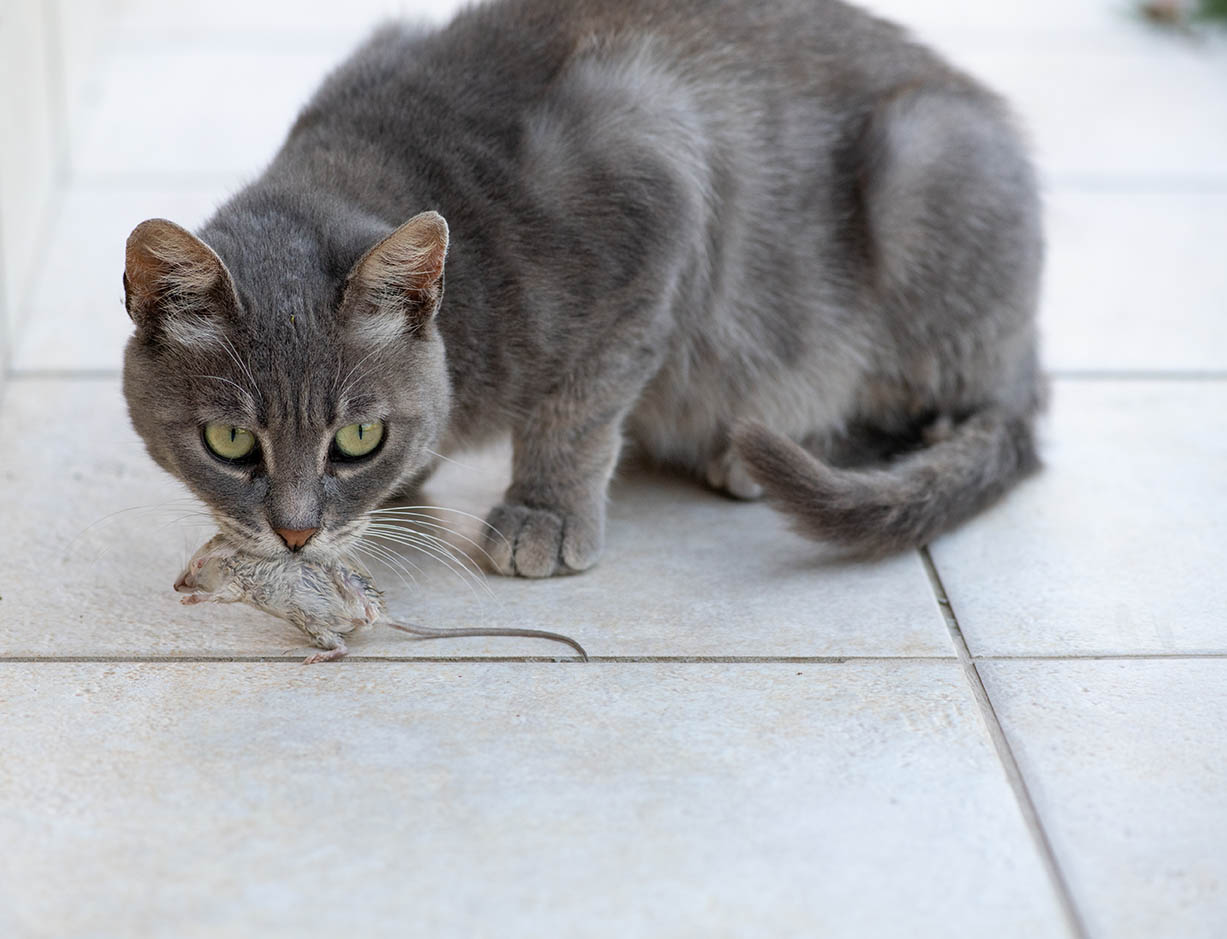 Over 10,000 years ago, cats were domesticated to be loving, fuzzy companions. To this day, cats are easily one of the most popular pets around the globe. Despite the popularity and domestication of cats, they can have some pretty undesirable characteristics.

Even some of the most avid cat lovers find some of their most unique characteristics, such as bringing you a dead animal, off-putting. This habit is strange to humans, but it is normal and written into most cats’ very nature.

In this article, we are going to look at three reasons why cats bring you dead animals. Let us get started.

Although cats have been domesticated for so many years, they still have a powerful instinct to hunt. This instinct comes in handy for people who use cats for pest control, but the average cat owner likely finds their lovable kitten’s dead gifts rather disturbing.

Even household cats that have been fed by humans their entire lives will have the urge to hunt, both for food and for pleasure. Whenever wild or domesticated cats catch their prey, they are likely to bring it back to their pack for various reasons.

The idea of taking the prey back to the pack makes a lot of sense given how cats approach hunting, consuming their prey, and their interactions with other cats. For starters, many wild cats are pack animals. As a result, they have an urge to share their kill with other cats so they can all share in on the feast.

Beyond that, cats also use their prey as a teaching method for the young kittens. Females are mostly likely to bring prey back to kittens, even kittens that are not their own, to teach them how to hunt for survival.

Even though cats naturally have an urge to hunt for survival, cats also enjoy the hunt. That is why many domesticated cats will still hunt, even if they are not hungry. In fact, many cats will hunt and kill inedible animals purely for enjoyment.

3 Reasons Why Your Cat Brings You Dead Animals

With this prey catching behavior in mind, here are the three main reasons why your cat brings you dead animals:

1. They Want to Save The Food For Later

You know when you go to a restaurant and take the leftover food home for later? Cats do the same thing with their prey. They may catch prey when they are not hungry, but they do not necessarily want to waste the food. So, they will bring their prey to the doorstep or inside the house so they can save it for later.

In this case, the cat is not so much bringing you the dead animal. Instead, the cat is saving it for themselves. It will be rather obvious that this is why they bring their prey inside when they do not show it to you or bring it to you directly.

As we mentioned above, cats are pack animals. This causes them to share food with their family. If you have a solitary cat, they will likely view you as a member of their pack and want to share their kill with you. So, they could bring dead animals as gifts or a way to help you stay full.

When cats want to share with you, they will be rather obvious about it. They may bring the prey directly to you, drop it at your feet, or send some other obvious message that the prey is a gift.

3. They Want to Teach You How To Hunt

Finally, the last reason your cat may be bringing you a dead animal is that they are trying to teach you how to hunt. Some studies suggest that cats do not recognize humans as being any different from cats. Since they do not see you killing, they might want to teach you this basic survival skill.

If you have a female cat bringing you dead animals, she could be trying to share with you or teaching you how to hunt. In contrast, if it is a male cat, he probably wants to share with you, not teach you.

What to Do About It

Since the desire to hunt is so deeply ingrained in cats, it is impossible to deter them from this behavior completely. There are some ways you can discourage the behavior, however, by stimulating your cat and giving them more to do than hunting for prey. Here are some things you can do to prevent this behavior:

As we already mentioned, it is impossible to suppress a cat’s instinct to hunt. You can redirect their attention so that they play instead of hunt. Encouraging them to play will satisfy their natural desire without forcing you to clean up a dead rodent.

Try to find a toy that cats will find mentally stimulating and mimic a live animal. A laser pointer, feather wand, and moving objects are all great toys to pick. Your cat will try to catch the toy, allowing them to feel like hunting even when they are not.

In addition to selecting toys that redirect their instincts, make sure to play with them regularly. Playing with your cat will make them feel bonded to you, and it will exert their energy. Whenever they are properly exercised, they are less likely to hunt since they are already tired.

You can play with them by using toys that redirect their instincts. Even if you do not have specific cat toys, you can use a shoelace or string to provide the same experience without paying any extra dollars. No matter what toy you select, make sure you play with them daily and consistently.

To sum it up, cats are incredibly impressive hunters with an insanely strong desire to catch prey. Because of this instinct, cats may bring you a disturbing gift to save for later, share with you, or use as a teaching method.

Even though you cannot squash a cat’s natural instinct to hunt, you can discourage them from bringing you dead animals. Most notably, playing with your cat regularly using toys that redirect the instinct will minimize the problem.

No matter what, you should be flattered that your cat is bringing their dead animal to you. Though it is certainly a nuisance, all three reasons show that the cat trusts and cares about you enough to bring its kill in your proximity.

Bringing your fluffy new kitten home is an exciting and memorable time. While you might have picked up all sorts…
The category

This cat breed is believed to have arrived by Viking ships to Maine, United States, sometime in the 1900s, where…
The category

Every cat needs cat litter. Because it is a product every cat owner needs, there are many litter options out…