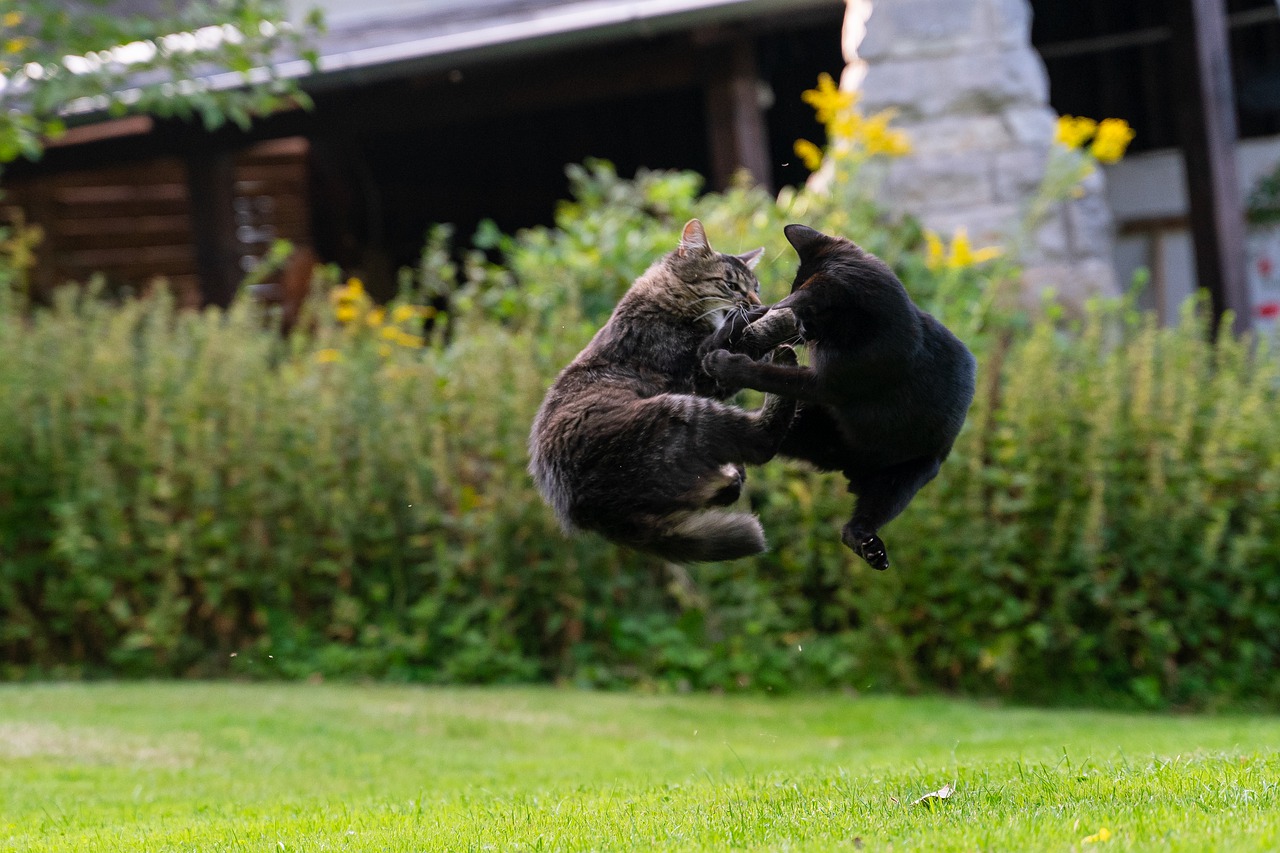 If you live in a multi-cat household, you may be familiar with spats among your feline friends. Referred to as inter-cat aggression, cat fights are stressful to pet parents and potentially harmful to cats.

In this article, we’ll explore the different reasons behind cat conflicts, and ways to put an end to the bad behavior once and for all.

Do you own more than one adult male cat? Your two male cats may be battling it out for a number of reasons. Typically, intact male cats will get into fights. This behavior will get dramatically worse during mating season if there’s a female feline in the house. Ninety percent of inter-cat aggressions can be prevented by neutering or spaying your pets.

If your cat feels threatened, he’ll try to protect himself with defensive tactics. If you notice your kitty has his ears flattened, his rolling slightly to the side, or is crouched with his tail and legs pulled underneath his body, he may be trying to tell you he’s scared. Trying to approach a cat in this posture will encourage an attack.

In the wild, felines will protect their territory from outsiders. It is common for a housecat to attack another kitty if he feels it is intruding on his space.

Do you have many cats in your home? Your kitties may be ganging up on the lowest-ranking cat in the group, typically an infirm kitten or an elderly cat. If the bullied pet is acting like a victim by displaying submissive body language or hiding, he’s only encouraging the bullying.

A cat may direct aggression toward another pet, or even you, even if nobody provoked him. For instance, your kitty may be sitting in the window and witness another cat in the yard. He’ll suddenly become extremely agitated because the stranger is intruding on his territory. If you go to pet the upset animal, he may bite you because he’s so worked up by the cat outside.

Play between cats can sometimes get rough. Sometimes the playing can escalate into a full-fledged fight. If this happens, separate the two cats immediately.

A change in scenery can cause a cat to get stressed. If you’ve moved houses or simply moved the litter box to another room, the cats can get upset and fight. A change in routine can also cause your pets to take it out on each other.

If your cat is between two and four years old, he may be challenging other cats in the household for ranking status. This could lead to a fight.

How to Stop a Cat Fight

If your felines are fighting, never count on them to work things out. While your first instinct may be to try and jump in and separate the pair, you may get scratched or bitten in the process.

To break up a cat fight, try distracting the felines. Get a toy, make a loud noise, or open a can of their favorite food. Once their attention is averted, they’re likely to stop fighting.

If the distracting technique didn’t work, spray the two cats with a water bottle.

If your cats keep fighting, you may want to seek a more permanent solution. Seek the advice of your vet or an animal behaviorist. You can also use pheromones to reduce stress, set up multiple feeding stations, and add more territorial space to prevent your kitties from having to share cat tress, beds, and hiding areas.

Cats fight for a number of reasons. From protecting their territory to bullying a low-ranking feline, kitties can get into physical altercations. It’s important to break up the fight as soon as possible to avoid any injuries. Try distracting them or using a water bottle.

The best way to prevent cat fights is to get your pets fixed. Calming pheromones and additional territorial space also work.

Using these techniques will help you and all of your cats to coexist peacefully.

It’s a truth universally acknowledged among cat owners that our kitties deserve all the treats. But what should we do…
The category

There are tons of exceptional cat breeds that offer magnificent coats, colors, and patterns. Rex cats are nothing short of…
The category

Owning a cat means providing the best care possible to keep her healthy and happy, which, of course, includes giving…