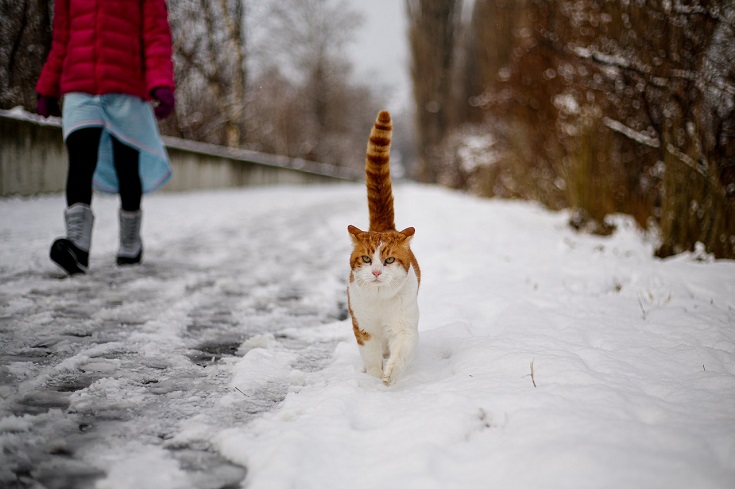 Is your cat too clingy? Does she constantly follow you from room to room to room and never leave you alone? While this type of behavior can be endearing to some, it can be downright annoying to others.

There’s a widespread assumption that cats are independent and aloof creatures that would never, ever succumb to the behaviors of a dog. However, this is not always the case.

Here are seven reasons for your following feline.

If you adopted your cat when he was extremely young, he may view you as a motherly figure. Kittens will often closely tag along behind their mothers for protection. If your kitty sticks to you like your shadow, he may have been removed from his mother too young and considers you his adopted human parent. You make him feel secure and safe.

Your kitty may be constantly following you because he is bored. Indoor cats cannot carry out their natural desires to hunt and explore, and thus can be easily prone to boredom. If your cat is using you are a source of mental stimulation, try enriching his environment. Provide him with plenty of interactive toys, a seat in the window where he can watch the birds, and maybe even another four-legged feline friend.

Believe it or not, cats can suffer from separation anxiety just like dogs do. If you’ve been away on a trip or working longer hours than usual, your cat may become exceptionally needy.

Wild cats spend much of their day surveying the area that they consider to be their territory. This behavior spreads their scent throughout the region and discourages potential intruders. If your housecat is constantly rubbing up against the furniture or you, he may be protecting his territory.

Living inside prohibits your kitty from properly patrolling his territory. However, when he sees you move around the house, he may assume that you are making a mark on what he considers to be his. Because of this assumption, he’ll follow close behind you.

Just like us, cats are creatures of habit. In the wild, they’ll go through their checklist of daily routines including surveying their territory, hunting, and napping. Your cat will look for alternatives to these natural activities and may decide to follow you around as you go about your own daily rituals.

Daily playtime sessions are vital for a cat’s mental and physical wellbeing. Cats hunt, stalk, and chase not just to catch prey, but to entertain themselves and hone their skills. If your cat “stalks” you from around the corner and playfully attacks your feet, he is simply fulfilling his instinct and having fun.

Your feline may be following you around the house because he wants something. This is obvious when he follows you into the kitchen for his morning meal. Despite this behavior being cute, there may also be an underlying cause for it. Medical conditions such as hyperthyroidism and diabetes will make your cat constantly hungry. If you suspect this to be the cause, make an appointment with your vet.

Is It Healthy for My Cat to Follow Me?

Following you around is a sign of a healthy cat. They do this to play, show affection, keep boredom at bay, and guard their territory.

However, it is possible that there is room for worry if your cat follows you everywhere. He may feel unsafe and insecure in his environment, have separation anxiety, or he be getting bullied by other cats in the household.

Why is My Cat Following Me? The Bottom Line

Cats are social creatures. They’ll follow their humans for a number of reasons including security, entertainment, and adoration.

If your cat follows you everywhere, give him the love, stimulation, and attention he deserves to feel calm and confident in his home.

Interested in learning about other odd cat behaviors? Check these out:

10 DIY Cat Halloween Costumes You Can Create Today (with Pictures)

When Halloween rolls around, you may be considering dressing up your feline. While there are countless commercial costumes available across…
The category

How Much Does It Cost to Own a Cat? Financial Breakdown 2021

If you’ve been dreaming of adding a cat or kitten to your family, it’s a good idea to take a…
The category

5 Pros and Cons of Owning a Cat

Almost 70% of American households have at least one cat. Should you join the majority? Deciding whether to adopt a…