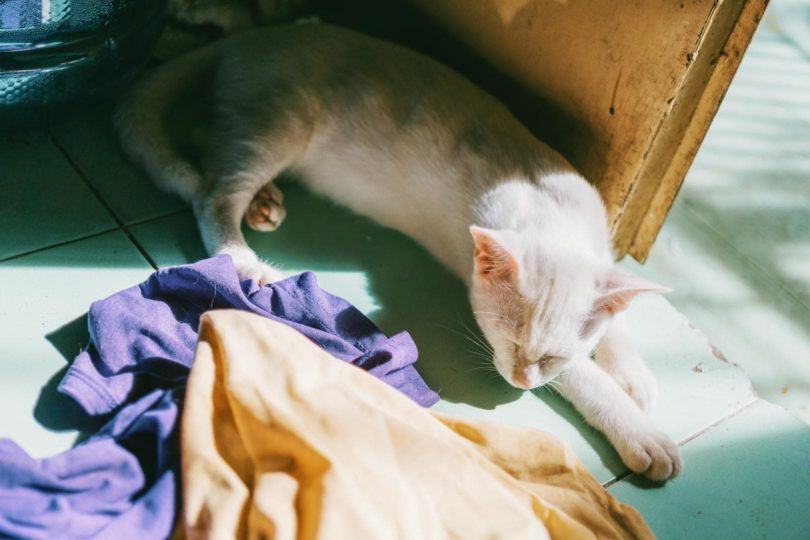 The information is current and up-to-date in accordance with the latest veterinarian research.

It’s a very common complaint – you get in from a hard day at work, go to put on your PJs, and they’re covered in urine. Cats often pick the worst places to pee, sometimes even urinating right in front of their shocked owners. But contrary to popular opinion, they don’t do this to ‘make a point’ or because they’re ‘getting back’ at their owners. There are many reasons why you might find your cat urinating in places other than their tray.

So, if you have ever found yourself texting your friends saying, “My cat peed on my clothes right in front of me!” you should read on to find out why, and how to stop it.

7 Reasons Why Your Cat Is Peeing On Your Clothes

Cats are very prone to urinary issues – we call this Feline Lower Urinary Tract Disease or FLUTD. The majority of cases of FLUTD are caused by Feline Idiopathic Cystitis (FIC). This is a strange disease – it’s very common, but we haven’t yet found the cause (hence ‘idiopathic’). Studies have established that cats are more prone to FIC if they’re overweight, indoor cats, eating only dry food, or living in a multi-cat household. It’s also likely that it’s affected by stress – a stressful event such as a house move or construction/remodelling work often precipitates an attack.

Cats will display classic signs of cystitis – urinating little and often, painful urination, and even blood in the urine. Because it hurts to pee, cats will avoid their tray and pee in other places – my old cat used to use the bath. A urine sample usually reveals no bacteria or crystals, and there’s not a lot that can help except pain relief and time.

If your cat is young and has recurrent problems where they won’t urinate in the tray, this is probably the main reason. Of course, there are other causes of FLUTD, including bacterial cystitis and stones or tumors in the urinary tract, but these are much less common.

Some cats will avoid their tray because they are stressed, but they aren’t suffering from FIC. Instead, they develop a fear of using the tray. This is usually the case for cats who are being bullied.

The litter tray is often by the cat flap, which may feel unsafe. Putting trays near large windows is also bound to cause problems if there’s a bully cat outside. For these cats, try placing a tray in the area they want to use – if that’s under the dining room table, place a tray there. This is clearly where they feel safe!

Next time your cat pees in front of you, watch what they’re peeing on. If it’s a vertical surface, they’re probably marking, not peeing! It’s a myth that neutering will stop cats from spraying – both males and females can spray even when they’re neutered, although they’re a little less likely to do it.

Cats spray to mark their territory, especially if there’s something they’re worried about – like another cat nearby. So, if your cat is spraying, it’s worth working out what’s upsetting them. Is there a neighborhood cat threatening their territory? Perhaps there’s been strange people coming into the house? Is there anything you can do to help your cat feel more confident, like closing the curtains so they can’t see the other cat prowling around the garden?

Some cats just won’t use a tray that has something in it, even if it’s their own stool or urine. And this can be annoying, as sometimes they’ll wait until the tray is clean before using it, necessitating an immediate re-clean. Having several trays may well solve the problem, and self-cleaning trays can be worth the investment for these cats!

Arthritis is very common in older cats, with one study finding signs in 90% of cats over the age of 14. Unfortunately, cats often mask the signs of pain, and this means that owners (and even vets!) aren’t aware that they’re struggling. But sometimes they show subtle signs. Avoiding the litter tray is one of these signs, as cats with arthritis may struggle to get into their tray (especially if their tray is high-sided) or assume the urination position. And to make matters worse, if they find it painful to urinate, they sometimes assume it’s the tray at fault – and start urinating elsewhere.

If your cat has started urinating in new places or avoiding the tray and they’re elderly, consider whether arthritis could be a possibility. Try a tray with lower sides, or provide ramps. Your vet can also recommend medication for them.

Just like arthritis, an injury to the legs or back can cause cats to be painful when urinating. The most common injury that can do this is a cat bite and the abscess that almost inevitably follows. If your cat is at the losing end of an argument, this bite is often on the tail or lower back – meaning they’re uncomfortable when they pee. If they associate the pain with the box, they’ll often try weeing elsewhere. These cats have often had a confidence knock, too – meaning they’ve got a bit of anxiety or fear around urinating and will prefer a quiet spot. Veterinary treatment is usually needed for the bite, too.

Did you know that 1 in 3 cats will suffer from chronic kidney disease? The failing kidneys can’t recoup water from the urine before it leaves the body, meaning that cats urinate more often, and a bigger volume. They drink more to compensate, but that inevitably leaves the body, too. These cats can saturate their tray quite quickly and may choose to urinate elsewhere. They may also be ‘caught short’ and not be able to make it to the tray. Cats with renal disease need veterinary care and support.

My Cat Peed on My Clothes, What Do I Do?

Of course, you need to work out what’s wrong with your cat, so you’ll need to schedule a consultation with your vet. In the meantime, there are a few things you can do.

Firstly, you need to get the clothes through the wash and clean up any spills on the carpet. You should use a proprietary pet odor removal product – they contain enzymes to destroy the molecules that make the area smell. Even if you can’t smell it, your cat probably can, and they’ll be drawn to the area again – so make sure you do a good clean up job!

Did you know there's an enzyme cleaner that does it all? The Hepper Advanced Bio-Enzyme Pet Stain & Odor Eliminator Spray permanently removes the very worst smells and stains (truly, everything you can imagine!), and they offer a 100% satisfaction guarantee! Click here to get yourself a bottle.

At Excited Cats, we’ve admired Hepper for many years, and decided to take a controlling ownership interest so that we could benefit from the outstanding products of this cool cat company!

Secondly, you need to think about what’s upsetting your cat. If your cat is young, it’s more likely they’re suffering from stress or cystitis. Older cats might have arthritis or renal disease. Observe your cat’s behavior and look for any signs that they’re not themselves. You should also make an effort to check how much your pet is drinking, as this can help the vet.

Whilst you’re waiting for your appointment, there are some first-aid things you can try. Adding a new litter tray (or two) in a different place often helps. It’s also a good idea to make sure no clothes are left on the floor. If your cat seems a little stressed, try plugging in a Feliway diffuser – you’ll need one per three-bedroom house – and getting them some new hiding places to allow them to escape from whatever is upsetting them. Ultimately, a trip to the vet is the best thing you can do for them, as they’re experts in getting to the bottom of what’s wrong.

Joanna is an experienced veterinarian working in the UK. She has written about pets and pet health for many websites, blogs, and pet magazines and loves to help owners understand their pets through her writing.

Why Does My Cat Clean Herself on Me? Is It Normal?

Cats have quite a few strange behaviors. Even if you’ve been living with cats forever, you may be surprised by…
Cat Breeds

History of Russian Blue Cats – Taking a Look at Their Past

The Russian Blue is a gorgeous cat with a silvery blue coat, emerald green eyes, and a winning personality. These…
Cat guides

At What Age Should You Neuter or Spay Your Cat?

Over the years, the recommended age for spaying or neutering cats has changed. There are still varying opinions, but most…

Did you know: an average of 8 cat foods are recalled every year?

Get FREE Cat Food Recall Alerts by email whenever there’s a recall.