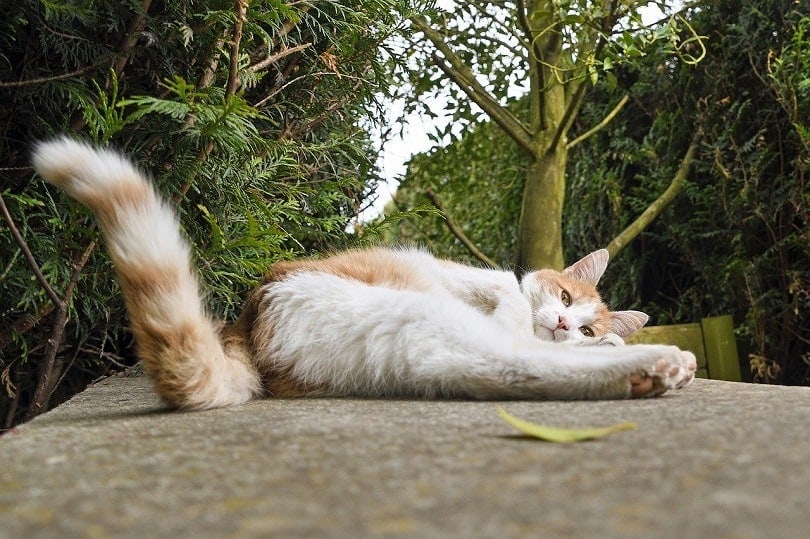 If you’ve ever owned a cat, you’ve probably noticed that they sometimes thump their tail while laying down. Usually, this is nothing to be concerned with, as cats can “wag” their tails while laying down for all sorts of different reasons.

However, you still might be wondering why your cat is thumping its tail. Just what does it mean? Let’s take a look at a few potential reasons behind this behavior.

If you’ve just walked into the room and your cat started wagging its tail, it could be a greeting – without your cat needing to get up. There are several ways your cat can greet you, but most of them require getting up. For example, head rubbing is often a “hello” signal, as is an elevated tail.

However, while laying down, your cat can do none of these things. Therefore, they begin to wag their tail. The can may not decide to get up for all sorts of reasons. Perhaps they are entirely comfortable, or they may not assume that you aren’t going to stay around for long. Or, in typical cat fashion, they are expecting you to come to them.

If your cat is looking at you and seems relaxed, this is likely why they are thumping their tail on the ground.

Tail thumping may be a sign of contentedness, especially if the cat doesn’t seem interested in anything in particular. If you’re petting the cat and they’re gently thumping their tail against the ground, it’s a sign of their enjoyment.

However, don’t always assume that a wagging tail means the cat is content when you pet him or her. As we’ll discuss, tail thumping can also be a sign of aggression and frustration. The tail wagging could easily mean that your cat is frustrated or not interested in the current attention they are receiving. Purring can also be a confusing signal since it can also signal that your cat is agitated or in pain.

Either way, you’ll need to pay attention to your cat’s other body signals to determine why they’re wagging their tail.

If a cat’s tail is swishing around widely while they’re lying down, it’s a sign that they may be a bit frustrated. Petting them now could result in an unhappy scratch or your cat fleeing from the scene. They’re not much in the mood to cuddle.

Cats can feel frustrated for all sorts of reasons. Perhaps you woke them up, or maybe they’re just a bit grumpy today. Sometimes, we can locate the source of our cat’s frustration and help fix it, but other times we cannot.

This isn’t necessarily a sign that our cats are frustrated with us. Just like people, all cats are going to get frustrated at some point. Their tail thumping is simply a way for them to show it.

4. They Want to Play

If the cat is laying on its stomach and wagging its tail, it could be about to pounce. Many cats will wag their tail as a sign that they want to play, and sometimes this causes their tail to thump on the ground. Don’t be surprised if your cat leaps a few moments later – or doesn’t, sometimes it’s all about stalking, and the cats never actually leap.

Usually, you can tell a cat wants to play because its pupils will enlarge, and they will be too concentrated on whatever they’re “stalking.” They may even chatter. Cats will also wiggle their bottom and shift their weight around as they try to find their balance before leaping.

Now is the time to break out the cat toys.

Tail wagging can also be a sign that your cat is in pain. Cats are very good at hiding their pain and diseases, as they don’t want anyone to notice that they are vulnerable to attack. Typically, this sort of tail movement is sudden and doesn’t appear to be related to anything that’s going on. It’s an involuntary, reflex action – like a jerk a person might do when in pain.

You’ll want to begin looking for other signs that your cat may be in pain. These include lethargy, struggling to get comfortable, hiding, aggression, and a change in appetite. All of these are signs that something is off and that you may want to take your feline to the vet.

Be aware that playing tail movements can also seem quite jerky and random. However, in these situations, the cat is concentrated on something. If they are in pain, they may or may not be looking at anything in particular.

Alternatively, if your cat appears to be asleep except for its wagging tail, it could be completely unconscious. Cats can sometimes move in their sleep. Usually, it isn’t any large movements. Instead, it is only small things, like their tail. If your cat seems to be zonked out and then suddenly starts moving its tail, they are likely just dreaming.

Your cat may be thumping its tail on the ground for all sorts of reasons. You’ll have to look at the circumstances and your cat’s other body cues to figure out exactly why. Truthfully, tail thumping is a pretty standard thing cats do, so it isn’t always the most accurate way to tell what your feline is feeling. You can partner with the other clues your cat is giving you, though, which may provide you with some usable information.

When your feline starts wagging its tail, pay attention to its environment and other body movements (or lack thereof).

Kristin is passionate about helping pet parents create a fulfilling life with their pets by informing them on the latest scientific research and helping them choose the best products for their pets. She currently resides in Tennessee with four dogs, three cats, two fish, and a lizard, though she has dreams of owning chickens one-day!

The Domestic Longhair Cat isn’t any one specific breed. It’s just the common name for a house cat with long…
The category

Can Humans Eat Cat Food? What You Need to Know!

Have you ever been putting together your cat’s meal for the night and thought to yourself “wow, I really want…
The category